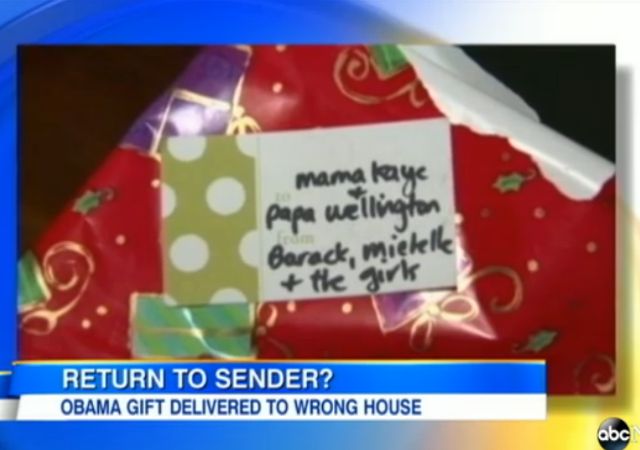 A special gift from the Obama family intended for the godmother of the president’s daughters was mistakenly delivered to an unsuspecting recipient in Illinois, after a post-office mix-up.

A woman in the Chicago suburbs got quite a surprise when opening up a delayed Christmas package from her brother:  A present from the Obama family was mistakenly inside.

Alane Church told ABC News that a box filled with Christmas presents for her family from her brother in New York arrived a week late and was in complete disarray. The presents had been re-packaged in a toilet paper box with all of the packages as well as the ripped wrapping paper inside. There was also a note from the Post Office apologizing.

Church said she received the delayed box on New Year’s Eve, but didn’t open it until yesterday and she didn’t realize there was another package at the very bottom until she had passed out all the presents to her children. It was a photobook like the ones made on the photo site Shutterfly from the Obama girls to their godparents and Church says it is a “beautiful book.”

The book contained photos from all throughout the year, some that appeared to have been taken professionally, but others that “look like they are taken on someone’s phone, just sweet memories,” according to Church.

A tag on the present was addressed to “Mama Kaye and Papa Wellington” and marked from “Barack, Michelle and the girls.”  “Mama Kaye,” as it turns out, is Kaye Wilson of Chicago, the godmother of Sasha and Malia Obama.

Church explained that she learned more about the intended recipient of the gift after she posted a photo of it on her Facebook page, according to ABC News.

Church said she didn’t know what to do at first so she put a photo of the present on her Facebook page and that’s when a friend told her “Mama Kaye” is the godmother of the Obama daughters. Church contacted Wilson and Church said she was “elated” because she had been “waiting for it to arrive.” Wilson told her “every year the girls make a book of their life in the White House.”

Church is reportedly working on getting the present delivered to its proper location, once she can figure out how to contend with the snow in Illinois.

The White House has confirmed that the photo book is from the Obama family, according to Politico.

“The president and first lady sent a book of photos to their children’s godmother for Christmas. There was an errant delivery, but we’re appreciative of the effort underway to make sure the gift arrives at the intended destination soon,” a White House official said.

Looks like someone else will be on the IRS list this year. I’m sure Secrert Service has laready been there to ransack the place.

I have a “friend” like that. Every Christmas I receive a glossy photo card showing off all the wonderful things he’s done and places he’s been over the last year. It always gives me a good laugh before I toss his card in the fireplace.

Great investigative journalism. I guess I’m the only one wondering how two different packages were intercepted, opened and ransacked, combined, re-packaged and delivered late with only an apology for the late delivery. One would think there would be an investigation, especially considering the source of the other package. She must be on some serious mood calming drugs, because I would be livid.

Sounds like TSA, NSA, FBI or the CIA were helping out at the USPS over Christmas.

Mama Kaye is lucky. I would have tossed it in the trash.

Repackaged in a torn toilet paper box? The POTUS’ present was in the bottom? Included also ripped wrapping paper?

How the heck did that happen?! And how did a present from the POTUS get sent REGULAR MAIL?

I even sent mine Priority Mail – in their “special” boxes – to be sure my present got to its destination, track-able and on time. Sheesh!!

Who are these “wizards of smart” that get these Ivy League degrees but can’t even mail a present at the Post Office?!

Is this a metaphor for what’s in store for us with ObamaCare? I think it is, only nobody will be finding the Obama family’s health care at the bottom of their folded, spindled and mutilated health coverage.

*L* Having had to deal with USPS in Chicago for years, I can’t say that their handling of these packages surprises me in the least. The only difference is that if one of us “little people” complain about lost/stolen/damaged packages, USPS just shrugs it off. My very first Amazon order ended up stolen by somebody at USPS – a videotape in Russian – and the kicker is that they still delivered the shipping invoice that was inside the package to my locked mailbox. This may be the first time in the history of USPS in Chicago that somebody actually gets fired for gross negligence on the job.

That being said, maybe I’m just the suspicious type, but I have to wonder why the book was getting sent in the mail anyway. I’m sure it didn’t have a White House return address, but sheesh… Furthermore, with a “shutterfly-type” book, was this something that was printed by official US presses, and if so, at how many thousands of dollars (and no, I don’t blame them for not going through Shutterfly or whatnot for security’s sake, but again…) Furthermore, being accustomed to the type of spending that the Obamas do, I wonder how many taxpayer dollars also went into paying the aides or interns needed to put the book together. To put together something nice takes a good commitment of time (I recently put together a calendar on one of these sites, which took me about 12 hours for 13 pages, for comparison.)