A freed terrorist boasts of his kills on television. 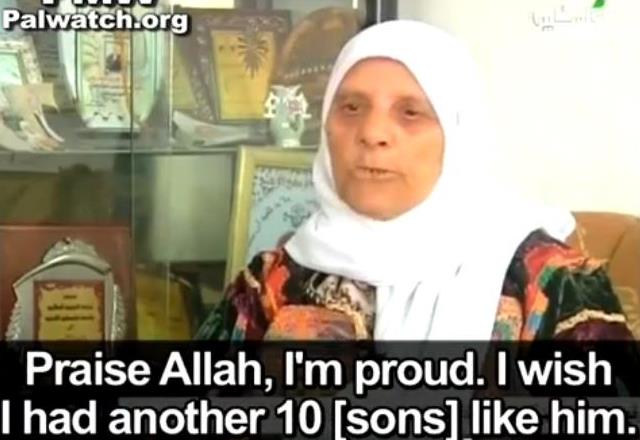 On American TV, a show called “Lovers’ Tales,” would likely be a romantic comedy. On Ma’an, the independent Palestinian television network, it is a weekly show interviewing freed prisoners.

This week Palestinian Media Watch reports on the interview of one Issa Abd Rabbo.

Until his release, Issa Abd Rabbo was serving two life sentences for killing two Israeli university students, Ron Levi and Revital Seri, who were hiking south of Jerusalem on Oct. 22, 1984. At gun point he tied them up, put bags over their heads and then shot and murdered both.

Abbas’ “hero” has now given an interview to the independent Palestinian news agency Ma’an on its weekly TV program Lovers’ Tales, which interviews released prisoners. There he calmly describes how he initiated the killing, spotted the two hiking university students and waited until they sat down to rest under a tree. He then recounts how he tied them up and murdered them in cold blood.

Here’s the clip. Note how he betrays absolutely no remorse.

To the Palestinians Abd Rabbo is a hero. In 2012, he was so highly regarded that the official Palestinian Authority television station interviewed his mother.

I am proud of my son. I’m proud like a tree that is planted in the ground and grows tall. Praise Allah, I’m proud. I wish I had another 10 [sons] like him. I have no regrets.

In October when Abd Rabbo and other terrorists were released as an incentive to get Mahmoud Abbas to negotiate with Israel. (For some reason the incentive of obtaining his own state is not incentive enough.) The New York Times reported Emotional Gulf Renewed as Israel Frees Palestinian Prisoners:

Among Palestinians, those freed are seen as political prisoners who fought for the Palestinian cause. Harbi Abu Duheileh said that he was not proud of what his brother had done, but that “he was defending his land.”

In Israel, where the returnees are widely viewed as terrorists, the release on Tuesday, like the one in August, has stirred protests and anguish. Many said it was too heavy a price to pay for entering negotiations with no guarantee of a peace accord.

In these two paragraphs the New York Times whitewashes the outrage. Notice the construction of the first sentence in the second paragraph. The implication is that people who kill defenseless victims for a political purposes are only “widely viewed” as terrorists and apparently only in Israel.

The truth is that in a civil society men like Abd Rabbo would not viewed as political prisoners but as the terrorists they are. In almost any other context Westerner would be appalled at a society that celebrated cold blooded killers.

This is the society that Israel is told it must make peace with. Does John Kerry worry about the future of Palestinian society?

Postscript: Elder of Ziyon notes that a number of international organizations fund Ma’an, including the National Endowment for Democracy (which is funded by both Congress and the State Department), the State Department’s Middle East Partnership Initiative and the United States Institute of Peace. There’s more on Ma’an’s funding at NGO Monitor. Do these organizations know what kind of vile programming they are funding?

A dead terrorist can not be released. Why Israel does not have a death penalty is beyond me. They need to hang these guys with ropes greased with bacon grease. Heck, Israel has enough Christians who could work at greasing those ropes.

Next time, instead of releasing 100 terrorist killers, Israel ought to hang 100 and let it be known the rope was pork laden. Let it be known that that is the fate of anybody convicted of terrorism against the Jewish state.

How long would it take for terrorism to decline? How many interviews would there be of freed animals like this one? Dead men tell no tales.

Not to be *too* gross, but greasing the rope with pork and menstrual blood is an even better idea … a two-fer if you will.

You must be a guy. I don’t think a woman would come up with that. It has an extremely high ick factor.

It is good. It is good to be a lover of Life. Not just a lover of living Life, but Life itself. My thoughts are that our Creator is also a Lover of Life…

That being said, this does not mean a society has permission to abdicate it’s responsibility to stomp out social pestilence wherever it is found. Murderers, rapists, terrorists, child molesters, etc. and all such pathological behavior needs to be eradicated in the most decisive of ways.

Those who call themselves Palestinians want prisoners returned? Fine. Send them back via a well aimed trebuchet or drop them from a plane flying at 10,000 feet. Send back the bones, send back the hide – whatever it takes to let the supporters of this pathology know that their behavior will not be countenanced.

I am saddened by my Jewish friends who believe that there are any Palestinians who seriously desire peaceful co-existence with Israel.

“Do these organizations know what kind of vile programming they are funding?”

HAHA, like there is any chance they aren’t funding this crap expressly because of the antisemitic, anti Israel, pro terrorist propaganda.

Is not bug. Is feature.

How did Israel go from being founded by a people who survived the Holocaust and the invasion of four Arab armies to a polite vassal state that constantly seeks the approval of a mere Chicago community organizer and a horse faced, political hack who gained his millions by marrying into Ketchup?

Peace will only come when Israel lives by the epiphany that their right to exist isn’t dependent on trying to win a rigged popularity contest.

It seems clear to me that the Jewish people have tried to reconcile with the Palestinians several times over, showing acts of mercy. The Palestinians only answer with irreconcilable scorn and hatred.

As long as the Palestinians continue to choose darkness, there will be no healing in their lives or in the region. Let him who has ears hear.

The Hope and Light Kingdom of God has already been launched in the region. Now the Palestinians must choose to look for that light just as Israel has and must continue to do.

“The people who walk in darkness will see a great light. For those who live in a land of deep darkness, a light will shine.” Isaiah 9:2

“Many said it was too heavy a price to pay for entering negotiations with no guarantee of a peace accord.”

Somebody mixed up the words. Should be:

“Many said it was too heavy a price to pay for entering negotiations with a guarantee of no peace accord.”

It is unbelieveable to me that so many people in Europe and the U.S. relish the thought of releasing murderers like Abd Rabbo.

Yes, I know the Left is extraordinarily fickle as to where it extends its support, but the lengths of what they are willing to ignore is mind-boggling. Well, hell… they ignore genocides like The Great Leap Forward, the Cultural revolution, Pol Pot’s killing fields, etc…

Two students hiking who were tied and summarily shot by this killer– and they’re going to demand his release? And for what? To bring to the table people who refuse to even acknowledge Israel’s right to exist? It’s just ridiculous.