If Assad wanted to leave power, he could have done so 100,000 dead Syrians ago. 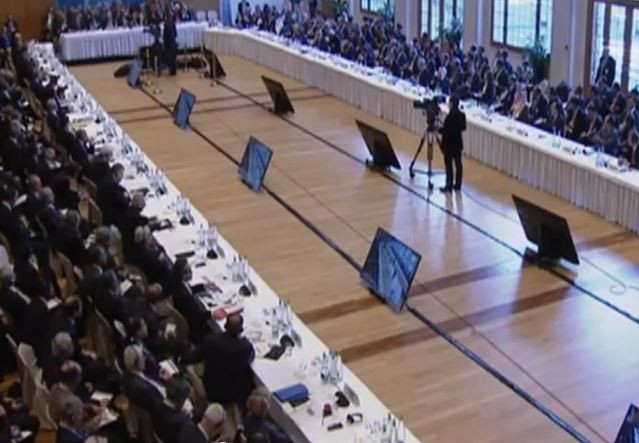 Syria’s government and main political opposition have traded bitter accusations on the first day of a major peace conference in Switzerland.

The opposition and US said President Bashar al-Assad had no legitimacy and must step down from power.

Syria’s foreign minister had a terse exchange with the UN’s Ban Ki-moon over the length of his speech and said only Syrians could decide Mr Assad’s fate….

The summit is discussing the Geneva communique which lays out a political transition plan for Syria.

Wednesday’s initial meeting, involving speeches from 40 or so foreign ministers – has now ended. The direct talks are scheduled to begin in Geneva on Friday.

At a fractious evening news conference, during which there were repeated calls for calm, Mr Ban spoke of the suffering in Syria, saying: “Enough is enough. The time has come to negotiate.”

I don’t see how this works out, since we are asking Assad to negotiate his own exit.  If Assad wanted to leave power, he could have done so 100,000 dead Syrians ago.

So long as Iran and Russia back him, and they still do, Assad is staying.  The peace conference, much like the chemical weapons deal, just buys Assad more time.

Despite Kerry’s rhetoric — another red line? — the U.S. seems okay with it.

The ship of a budding democracy in Syria has sailed. The choice remaining is a country ruled by a ruthless dictator with lots of dead or imprisoned “enemies of the state” or a failed state plunged into anarchy with hard-core jihadists from various locales battling each other for ascendency. The real politik in me wants to root for Assad just for thhe relative safety that a stable regime would bring to the Syrian people, but the American Revolutionary in me wants to let those same Syrians determine their own future, no matter the cost in human life. My default position is for self-determination, so I want to encourge the Syrians to stand up and take their country back. I’d like to say I’m rooting for both to lose, but I can’t root for the blood of innocents that is going to be spilled in either scenario.

A problem with this analogy is that the Americans won that battle but Britain went on to beat the French in the Caribbean & get the sugar wealth entirely to themselves. ( let us insertalso the slave trade corridors here ) . They bankrupted King Louis so much that it led to the revolution. Then Britain marched on to rule the seas on their naval warfare skills & innovation learnt from this op.

America of course went on to great things . They were 2 great Protestant powers.

I just don’t see either of these sides being that or going anywhere much .

Further – you guys were losing until you brought in French ‘ advisers’ . ( I hear ) who were enemies of Britain & superior at the time in military manoeuvres.

More so you were a new colony / settlement of many peoples . Syria has been Syria for thousands of years of tribes long established with polyglot religious makeup. They might be Native America more than you guys. Their freedoms & traditions counted for little in the spills.

But I also think it is not like any other situation in the ME we have seen recently.

You started off better than you ended: The choice is between the Dictator Assad, who’d be busy suppressing his own people to stay in power, and the Jihadis, who who export terrorism, threaten Israel, and of course annihilate the remaining Christians and Alawites in Syria.

The other option, of actual Syrian ‘freedom fighters’ getting ‘self-determination’ has a precisely ZERO chance of succeeding. These may have been the people that started the revolt, but it has long since been taken over by hard core Jihadis.

On one side their is Assad. On the other are jihadists/al-qaeda.

Our enemies are fighting each other. Let them. It sucks for the Syrian people but either side winning will also suck. The US should stay out of it.

Sec. Kerry is a freaking moron if he thinks Assad is going to give up power in a civil war that, for the most part, Assad is winning.

Mr. Heinz the Second, is a doofus, which makes Barry a double doofus.

Mr. Heinz II, is finding out that The Nile, Tigris and Euphrates are just a damn tad different than plying the Mekong Delta. That is IF he in fact did ply the Mekong.

BUT he got him a “secret CIA hat”, correct doofus?

Will your testimony before CONgress differ much from your 4/22/1971 testimony, johnny?

Here’s the deal johnny, you can be Syria and I’ll be Roebuck, howz’ that?

I dunno, Prof. Jacobson, seeing as no one blew themselves up at the conference hall, I’d say the day went better than I at least expected.

Then again, I write at Rantburg so I may be a tad cynical…

Assad is not our enemy. He is not willing to play Deposed Dictator, however. The Jugears Administration and its clowns have upset the balance of power in the ME with their loony ideas of kumbayah. Qaddafi was a strong ally because GWB flipped him. Our country betrayed him and every major player in ME took notice. It had a consequence that Jugears never saw coming in the form of the Egyptian military who saw that they needed to dump the puppet before they had a civil war to deal with.

Assad will stay, and should stay, because somebody has to keep the vermin under control and we have managed to get rid of all the pest control people in the region. BTW, it was our aid to the jihadis in Syria that has made this go on much longer than necessary with the responsibility for most of the civilian deaths falling on our laps.

40 foreign ministers says it all. As does Kerry stipulating that Assad has to go.