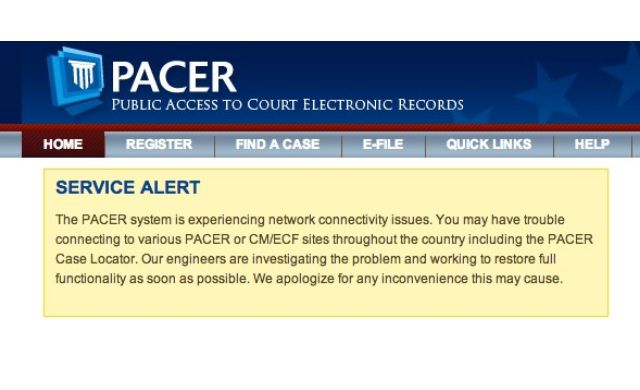 On Friday, January 24th, the federal court system’s public website became unavailable for several hours, as did access to the PACER system, uscourts.gov, and many other federal court websites across the country.  The outage impeded the ability of attorneys and litigants to file or retrieve documents online.

The cause of the incident was initially blamed on a denial of service attack.  (A Twitter account also claimed responsibility, but hackers sometimes claim credit for outages that have already occurred, so it’s often difficult to immediately ascertain whether or not such sorts of claims are true).

But by late Friday, the initial explanation changed after an FBI spokeswoman told the Wall Street Journal that technical problems, not a denial of service attack, were to blame for the outage.

On Monday, the FBI said it was now reassessing that position.

The FBI initially contradicted that account [Ed. note: of a denial-of-service attack], telling the Wall Street Journal over the weekend it believed that technical problems in court computer systems caused the outage.

An FBI spokeswoman said Monday, however, that the agency is “reassessing our initial position, as the facts are being reviewed. The FBI is prepared to assist the U.S. Federal Courts if necessary.” She declined to elaborate.

Meanwhile, a spokesman for the Administrative Office of the U.S. Courts said Monday it still believes the system fell victim to a denial-of-service attack. A federal clerk in Arkansas, in an email obtained by POLITICO, said Friday the disruption appeared to be a “new national cyberattack on the judiciary.”

In the end, it could still end up being that it was a technical issue.  I’m not sure that the updated statement from the FBI means too much more for now other than that people are collecting and reviewing all the facts.

While the definitive cause may apparently remain unconfirmed at this point, the sites appeared to have been restored to normal operation by Friday evening.

Probably just the NSA updating their software, and there was a “Glitch”.

Waiting for the courts in Florida to go down and chaos when someone goes after the electronic filing portal. This stuff makes me nervous. The massive movement to put all of life and information into remotely controllable computer systems makes us very vulnerable.

Hanlon’s razor
Never attribute to malice that which is adequately explained by stupidity.

Sometimes it can be hard to tell the difference.

technically a ddos IS a technical issue…

At this point a statement from the FBI leaves me wondering if any of it is true, because I figure most of it is lies.

Is that why some refer to the personnel of the FBI as the “Fibbies”?