“I hope the ASA’s call for a boycott produces just the opposite of its intended result – a proliferation of U.S. linkages with Israeli universities” 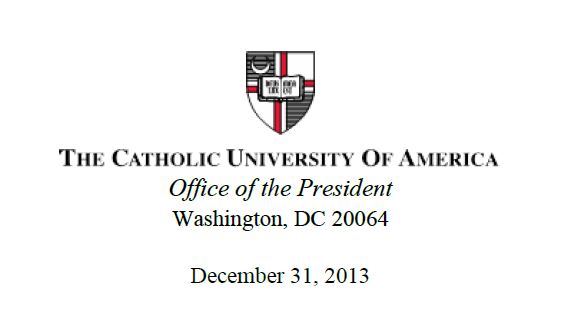 That makes Catholic U. the 100th university to issue a rejection.

And oh, what a rejection it was (emphasis added):

The American Studies Association’s recent call for a boycott of Israeli academic institutions is lamentable. The Association has appointed itself as a kind of inept volunteer fire department, aiming to put out the Israeli-Palestinian conflagration by throwing gasoline on the fire. That’s not exactly right. It has decided to pour gas not on the source of the fire but on bystanders, some of whom are trying to extinguish the flames. No good can come of punishing academic institutions for the shortcomings, real and perceived, of their nations’ leaders and policies.

Rather than restricting academic freedom to advance political causes, academic organizations like the ASA should be working to foster dialogue with their foreign interlocutors, perhaps especially those they disagree with. The academy – universities, faculties, and satellite institutions – is a place where research, open discussion, and creative thought can lead to reforms and new approaches to longstanding problems. I hope the ASA’s call for a boycott produces just the opposite of its intended result – a proliferation of U.S. linkages with Israeli universities and other universities in the Middle East.

>>”I hope the ASA’s call for a boycott produces just the opposite of its intended result – a proliferation of U.S. linkages with Israeli universities and other universities in the Middle East.

I love it. This is how you stick it to these people.

This is written in words of Honor.

Somebody get some lotion for the ASA, that burn’s gotta hurt.

You’re “Breitbarting” the Left here, Professor, or playing a key role in doing so. I commend you. This should be one of the New Year’s resolutions for all conservatives. We have to figure out ways to subvert them, Alinsky them, not just grouse about them.

Backlash boomerang is a bitch.

That fire and brimestone is gonna leave some scars
on the Asa!!!!!!

Boy, Catholic U really handed the ASA their a-s-s.

The evidence is plain and simply against the Islamist leftist fascist propaganda and boycott campaign.

There are 22,180+++ reasons to reject their bizarre (projection*) charges against Israel.

*The left always accuses other of their own actions and motives.

Thank you Catholic U for doing the honorable thing. Time to wake up everyone, we’ve been asleep for too long and I hope this entire call to boycott receives the backlash it deserves; the chicken and the ducks come to mind. There is no room in this country for “academic terrorism” or rubber-stamped conformity.

It wouldn’t hurt to write some letters of support to these college presidents.

Positive re-inforcement and all that you know – it might make it easier for them to stand up and do the right thing the next time leftists attack freedom.

The American Studies Association? Who’s that? I’ve never even heard of them.

[…] some of whom are trying to extinguish the flames,” Catholic University President John Garvey wrote in a statement, calling the boycott decision […]