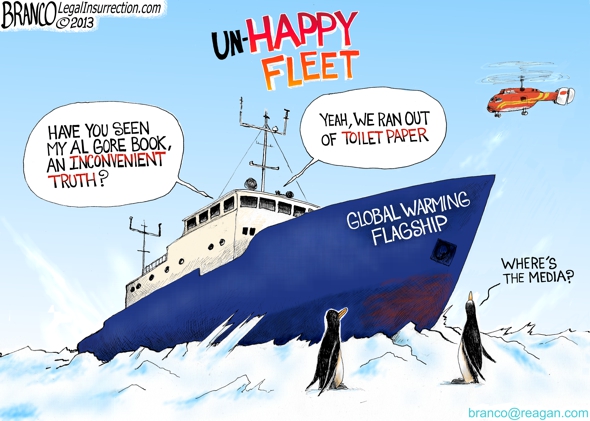 Where is it when we need it Sir El Gordo?

And the thing to remember is that it is Summer down in Antarctica, early “July” in fact.

Quite right, which is why two serious scientific expeditions were assembling their teams in New South Wales so they could get in place before the ice makes it difficult for the ships that deliver them to get out.

Unfortunately, among the ships diverted to the rescue efforts include ships carrying necessary supplies and equipment for both of those teams. There is no longer time to get back to NSW, load them up, and deposit them at their chosen sites.

Millions have been lost because all the prep work and supplies are for naught. Both will have to wait until next year to try again, and funding is uncertain after this setback. And the teams will all be unemployed for a year, it is doubtful many members can afford to hang on for next year.

All to appease an egotistical group of “climate tourists” who apparently assumed they would find only slush and not ice, because global warming.

Who would have guessed crickets exist at the South Pole?

I adore all of your pieces, but this one will be a favorite because it is about a subject near and dear to my heart.

…and who is going to pay for the millions of $$$ that this rescue fiasco costs?? ABJ

They did say they are going to plant 800 trees to offset the carbon emissions from the rescue ships.

That makes everything all better.