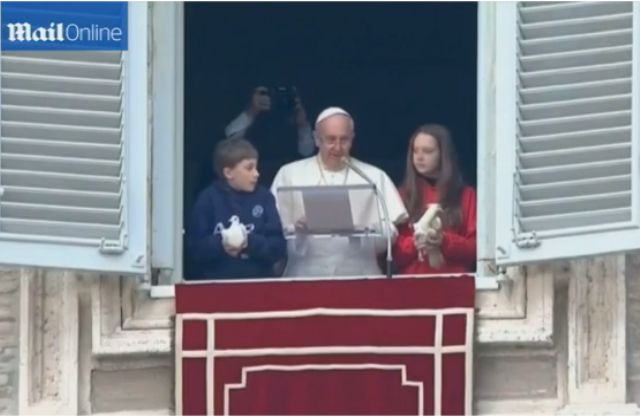 I hope this isn’t supposed to serve as some sort of a bad sign.

It started out with some thoughtful words on Sunday as the Pope appealed for “constructive dialogue” and peace in Ukraine, in the wake of ongoing protests and escalating tensions there.

Pope Francis called on Sunday for an end to violence in Ukraine after at least three people were killed during the latest clashes in the two-month crisis.

Police and demonstrators in Kiev clashed again on Sunday as protests against President Viktor Yanukovich’s abrupt turn away from the European Union towards Russia, Ukraine’s former Soviet overlord.

“I am close to Ukraine in prayer, in particular to those who have lost their lives in recent days and to their families,” Pope Francis said in his weekly Angelus in St Peter’s Square.

“I hope that a constructive dialogue between the institutions and civil society can take place, that any resort to violence is avoided and that the spirit of peace and a search for the common good is in the hearts of all.”

Shortly thereafter, children standing alongside the Pope on either side released two white doves in a symbolic gesture of peace.

But that quickly went awry when two larger birds immediately attacked the doves.

From the Associated Press via CBS News:

Two white doves that were released by children standing alongside Pope Francis as a peace gesture have been attacked by other birds.

As tens of thousands of people watched in St. Peter’s Square on Sunday, a seagull and a large black crow swept down on the doves right after they were set free from an open window of the Apostolic Palace.

One dove lost some feathers as it broke free from the gull. But the crow pecked repeatedly at the other dove.

The AP reports that it was not known what happened to the doves after they flew off and out of the view of spectators.

The Telegraph has photos of the incident.

This is too funny. I hope he excommunicated those predators.

Maybe the omen is about the upcoming meeting with Nobel Peace Laureate Obama. I’ll bet Pope Francis gets all smiley and huggy, just like Pope Benedict did. I wonder if he’ll ask Sparky why he dumped all over the March for Life, why he defends baby killing, and why he’s attacking Catholic Sisters.

Religion is a philosophy of morality. The Pope should focus on conveying God’s morality and resist symbolic gestures. He has strayed from his mandate and promoted equivalent or progressive morality. Whether this incident is significant or not, he should know that there is an aberration in his words and works.

Religion is a philosophy of morality.

Change “is” to “contains.” But you’re observation about symbolic gestures is fair. What gets me is his imprecision.

I do not characterize religion by its philosopher. I perceive God to be a philosopher, and his work is a moral philosophy. Everyone has a religion crafted by different philosophers and adapted by the individual. Everyone has a faith in God, gods (e.g. mortal), or marginally themselves. I do not consider faith to be a particularly significant characteristic, other than in the loyalty it engenders. A religion or philosophy can and should be judged on its own merits.

It’s like he wants to do all these socialist things and trots out the trial balloons to see if they’ll float, then when it doesn’t, you get these walk backs about imprecise translation and such. I wish the Bishop of the Church of Rome would stick to his Bible.

The seagull, of course, has long been a symbol for federal civil servants.

seagull management – a lot of squawking, everything above you, crap everywhere – then they leave….

And they thieve your fish’n’chips .

Sorry, wombat, that was supposed to a “reply” hit. Once, near Canarsie pier, I even had a seagull crap on my head. Typical government worker.

Sorry for the arrow – fat fingers. I like your stuff.

No harm, no fowl? too cheep? oh, the puns

I would say – dove, the other white meat. Dove (like pigeon, duck, and goose) is a dark meat.

Let them eat crow is a common saying, bu even more so is the symbolism of crows and war and/or mercenaries.

The ancient Roman augurs or Greek oracles would take it as a good sign that the doves escaped, but would view the event as a foretelling of conflict with some battle before the good prevails.

Ooh! A quick msg from Delphi.

Oracle of Delphi says thus: “Beware the people with the black (crow) banner with white writing (seagull). Still, they will not triumph.”

That’s very weird. I’ve never seen a herring gull attack another bird. Crows, maybe – I’ve seen them in small groups harassing a hawk. That was quite elaborate – one would annoy the hawk, then he’d back off and another would take over, then a third, etc. Didn’t seem to bother the hawk all that much, though, even though the crows were a bit bigger than he was.

I asked the online Magic 8 Ball if this incident means anything, and it replied “outlook not so good”.

http://20committee.com/2014/01/25/klitschko-i-fear-for-the-next-few-days/
The symbolism is pretty blatant for those into that type thing (which I’m not, normally). Putin makes a good crow, though: Preening, cunning and cannibalistic.

everyone reading into this way too much.
OBVIOUSLY global warming and an out of control CO2 spike mixed with the acid rain from the late 80’s falling from the ozone holes drove these birds to an insatiable bloodlust that could not be controlled. and all everyone there could say was…tastes like chicken.