What a bunch of Turkeys: “Santa Punched in Face”

What a bunch of Turkeys: “Santa Punched in Face” 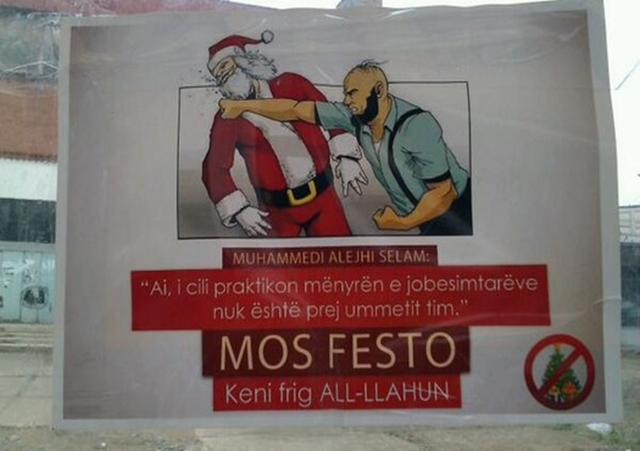 Christmas is a celebration of “peace on Earth, goodwill toward men”, and Santa Claus is famed for spreading joy to children throughout the world.

However, reports from Turkey and the Balkans show that the image of Saint Nick is taking a beating. Literally.

From the Hurriyet Daily News, which covers Turkey and the region:

A Muslim youth group and a neighborhood authority led two separate anti-Santa campaigns on the eve of Christmas in Turkey.

The Istanbul University branch of a group called Anatolia Youth Association (AGD) released an illustration of a Muslim youth punching Santa Claus in the face and announced that it would make a press statement against Christmas on Dec. 26 in Istanbul.

The group announced the event with a statement titled “Muslim, return to yourself!” adding that “Christmas is a Christianity practice.” The group also criticized the celebration of New Year’s Day, saying that the two dates were “mixed” and “united.” It claimed that celebrating Christmas and New Year’s Day was “wrong” and constituted “a blow dealt to Muslimism.”

The Blaze reports the image has spread to the Balkans:

The poster has been “circulated as we speak by Muslim Albanians within this predominately Christian region with a population of mixed ethnicities (Slavs, Gypsies, Bulgarians, Albanians),” the Examiner reported.

It translated the slogan on the poster as, “Whomever practices the way of believing of infidels does not belong to my people. Do not celebrate, be afraid from Allah.”

Separately, this week the mukhtar, or leader, of the Istanbul neighborhood of Sirinevler hung an anti-Santa Claus banner, Hurriyet reported.

“As in recent years, Santa Claus will not be coming to Sirinevler since he is nothing to do with our traditions and our culture,” Mukhtar Galip Karayiğit said in the statement.

The 77-year-old Argentine pope asked the crowd for a moment of silent prayer for “Christians who are unjustly accused and are subjected to every type of violence”.

Francis, celebrating his first Christmas season as pope, said “limitations and discrimination” against Christians was taking place not only in countries that do not grant full religious freedom but also where “on paper, freedom and human rights are protected”.

“This injustice should be denounced and eliminated…,” he said.

Francis did not name any countries but the Vatican has long urged Saudi Arabia, the site of Islams holiest places, to lift a ban on Christians worshiping in public.

If Islamic extremists consider a jolly old man in a red suit a threat, then the Pope has much praying to do.

Thank you for publishing this piece.

And there we have, in one image, the explanation for why we do not have world peace.

Everybody else knows how to get along, and mostly wants to.

The Muslim ‘youth’ is punching Santa because he’s upset he’s bald at such a young age while Santa still has all his fabulous locks.

Islam considers anything not Islam to be a threat to Islam.
BTW, I think they meant to say: “Do not celebrate, be afraid of Death in the name of Allah.’

Allah and his prophet Mo (Fleas be upon him.) must be absolutely pathetic characters, not to be able to tolerate competition from sane religions without resorting to savagery.

Meh. They are a nothing civilization of no accomplishments, no contribution to humanity and no effect on the civilized world. And God knows that as well as we do.

Let them stew in their own putrid juices. Drawing a picture of punching a Santa harms no one. At least while they are busy posting the pictures, they are not stoning women or blowing up children.

OK, Branca and Branco should collaborate on a piece that shows Santa pulling out his concealed-carry piece and shooting this knockout-game punk in self-defense.

And to think, St Nick is from (what’s now) Turkey…

Yawn. This is who Muslims are, like homosexuals, intolerant. A poster showing a strong young man punching elderly Santa in the face is nothing. The slaughter of Christians on Christmas Day is a real life event demonstrating the meaning of the poster.