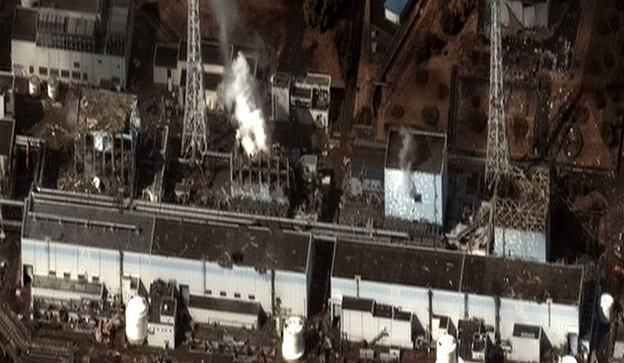 While Japan is continues to cope with the economic fallout from the 2011 earthquake/tsunami disaster that led to Fukushima-Daiichi nuclear power plant catastrophe,it looks like members of the U.S. Navy are still struggling with real fallout.

When the USS Ronald Reagan responded to the tsunami that struck Japan in March 2011, Navy sailors including Quartermaster Maurice Enis gladly pitched in with rescue efforts.

But months later, while still serving aboard the aircraft carrier, he began to notice strange lumps all over his body. Testing revealed he’d been poisoned with radiation, and his illness would get worse. And his fiance and fellow Reagan quartermaster, Jamie Plym, who also spent several months helping near the Fukushima nuclear power plant, also began to develop frightening symptoms, including chronic bronchitis and hemorrhaging.

They and 49 other U.S. Navy members who served aboard the Reagan and sister ship the USS Essex now trace illnesses including thyroid and testicular cancers, leukemia and brain tumors to the time spent aboard the massive ship, whose desalination system pulled in seawater that was used for drinking, cooking and bathing. In a lawsuit filed against Tokyo Electric Power Company (TEPCO), the plaintiffs claim the power company delayed telling the U.S. Navy the tsunami had caused a nuclear meltdown, sending huge amounts of contaminated water into the sea and, ultimately, into the ship’s water system.

San Francisco Attorney Charles Bonner subsequently filed a federal suit in the Southern District of on behalf of a dozen sailors…but the number has since expanded to over 50. During a recent interview with Tammy Bruce, Paul Garner (an Encinitas attorney who is also involved with the case) said that number is likely to expand to over 70 claimants in the next few weeks.

Though a San Diego judge dismissed the sailors case against the Tokyo Electric Power Co., operator of Japan’s Fukushima Daiichi nuclear plant, that isn’t the end of the legal battle on behalf of the sailors. The judge’s ruling was based on a technicality and the case will continue in January.

A San Diego federal judge has dismissed a lawsuit alleging that U.S. sailors were exposed to dangerous radiation during the humanitarian response to the March 2011 Japanese earthquake and tsunami.

But Judge Janis L. Sammartino left the door open for a follow-on lawsuit, and the attorney representing several sailors from the San Diego-based aircraft carrier Ronald Reagan said he intends to refile.

The judge dismissed the case Nov. 26 on jurisdictional grounds, saying it was beyond her authority to determine whether the Japanese government had perpetrated a fraud on its American counterpart.

The lawsuit originally argued that power company officials lied about the amount of leakage from the damaged plant, in concert with the government of Japan. Garner said he will refile the case without alleging the conspiracy with the Japanese government.

During the interview Bruce, Garner also indicated an emergency fund is being set-up for to help the sailors with their medical expenses. The website is not currently available (and I will provide an update when it is up). However, those interested can send their donations to the 501(c) organization via the following address:

these sailors will get screwed even more. soon media will burn a few straw men talking about hiroshima/nagasaki.
I always thought the desalination plants used detectors though.

The science on radiation exposure like this is very hard to track. The reality is that carriers are already a VERY toxic environment. They have jet fuel, lubricants, firefighting chemicals, etc. everywhere. In addition, they have their own nuclear reactors and atomic weapons on board that have uranium that is enriched way, way above anything in a commercial reactor.

Regardless, I think the sailor has a good case that the TEC did lie to everyone by only releasing the lowest estimates of radiation release.

“… carriers are already a VERY toxic environment.”
Silly nonsense. U.S. Navy ships consistently emphasize safety and are normally one of the most secure {and safe) places in the world. Since daily radiation monitoring is both extensive and routine, something is missing from this story.

The error is with the USN command on the ship. The plume contained fission products from the failed fuel that was stored in the fuel pools and normal post accident leakage from the primary containment. All of this material was released in an uncontrolled manner when the secondary containment failed catastrophically as a result of the hydrogen explosion. The hydrogen is a result of fuel cladding reacting with water at elevated temperatures. Fuel cladding fails at elevated temperatures and releases the fission products that were contained inside these assemblies.

So was this based on exposure on-ship or on-land.
There was much talk about keeping US aid outside the 90km exclusion zone, but there was some talk about the ship crossing through some emissions.
I can understand the latter being a problem, but the former should have been more than safe.

It’s difficult for me to believe that the newest(?) U.S. nuclear carrier doesn’t have CBR-resistant ventilation systems and water filtration systems as well as the monitoring to go along with it. It’s even more incomprehensible that the U.S. Navy would simply take the word of the Japanese government on the radiation levels rather than measure the levels for themselves.