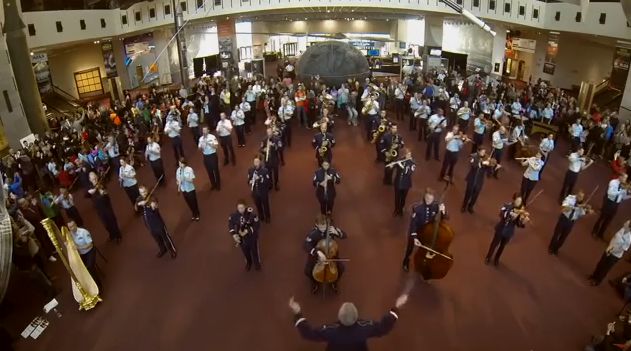 If you haven’t seen this yet, it’s packed full of awesome. (Scroll down for video).

The USAF Band decided to surprise visitors to the National Air and Space Museum with its first ever ‘holiday flash mob.’

They documented it on their blog.

Dec. 3, 11:53 a.m. – The Air and Space Museum is buzzing with excitement. The United States Air Force Band members disguised in civilian coats roam the museum, acting as tourists. Observing a sign stating that there will be filming in the area, a group of tourists asks an employee what is being filmed. “Something big is happening in here in seven minutes–stick around!” the employee replies. A group of children speculate what the big surprise could possibly be. “I think they might be launching that rocket!” a young boy chimes. “Maybe we’ll get to try on a space suit!” The crowd noise heightens as the clock inches closer to noon.

A man walks to the center of the museum carrying just one chair and places it in an open area. Nobody seems to notice. Suddenly, one cellist removes a civilian coat to reveal his ceremonial uniform. He sits down and begins to play “Jesu, Joy of Man’s Desiring.” A few close spectators turn and begin to listen. The cellist is joined shortly by the Band’s commander and conductor, Col. Larry H. Lang, as well as a bassist and a handful of winds and strings who are each presented with their instrument by a member of the United States Air Force Honor Guard. The small group slowly turns into a mass of airmen musicians, each adding a new texture to the tune. From the balcony, two solo voices begin to float out over the crowds. They are joined by a host of singers lining the balcony railing. As “Jesu, Joy of Man’s Desiring” draws to a conclusion, the music changes. The tempo accelerates and as the key changes, a group of brass players in ceremonial uniforms sound a glorious fanfare from the balcony of the museum. This fanfare leads directly to a rousing rendition of “Joy to the World.” The music fills the National Air and Space Museum and lights the faces of the audience members. At the conclusion of the performance, the final triumphant brass chord lingers in the museum long after the musicians have stopped playing. The audience erupts into applause.

The crescendo to the end, with full brass fanfare and singers from the balcony will make you smile as you watch the reactions from the crowd.

As a musician, I’ve been very lucky to have performed with a couple of the military bands in past years (not as a direct member, but in joint performances as a member of other groups).  If you ever have the opportunity to attend/view any of their concerts/appearances, especially around this time of year, I highly recommend it.  Some of the best musicians you’ll hear and just all-around fantastic organizations.  You won’t be disappointed.

The video is outstanding.

to carry on the theme…what does Sousa, California, and Hyman Rickover all have in common?

The United States Air Force does many things well. . . this is one of them. What a wonderful performance.

The USAF marching band has a blog…?

Ever since they went viral…or maybe even before that.

So well done! Great piece of Americana. Thanks for the post.

Nice. What a treat.

Wonderful. Uplifting. Joy on the faces of the spectators, inc. those of this video. Thank ou for posting it.

The bandleader’s military career was just ruined. Monday morning, Valerie Jarrett will see to that.

Beautifully done.
And so begins this year’s round of “Who’s holiday IS it anyway??”
I’m sure the band’s conductor will be standing tall in an office soon, and looking forward to an IRS audit.

(I am soo freakin’ tired of The Perpetually Offended ruining other people’s enjoyment.)

What!!! The US Air Force Band and singers singing about the coming of the King of the earth!!! Where is the ACLU crying “Bah Humbug!!”

In Obama’s military, they will all be forced to resign on bogus charges.

Forgot to add: the USAF, during this Judao-Christian hating administration, is playing Christian hymns about a Jewish family.

Somebody’s either got a pair of really big ones or somebody’s giving Obama the finger.

As a trumpet player, my ears perk up whenever I hear a band play.

This time I was truly amazed by the musical choices the USAF band made. They band didn’t just ‘entertain’ with “Jingle Bells.” Rather they zeroed in on the single greatest hope for mankind – the Incarnation: “Jesu, joy… and Joy to the World.”

In direct contrast to my comment on the last post about the Lenin icon being knocked down, I love it when the good is deployed, stands up, stands together and resounds with Joy as opposed to the emptiness and despair of the tin-eared regnant nihilism.

Agreed. This is the second time within two weeks we’ve seen beautiful, powerful music played in a public arena by public American aggregations under circumstances that must have required either serious debates before being permitted, or a tremendous amount of skullduggery and discipline on the part of many, many people beforehand to accomplish.

The other was “The” Ohio State University band’s selection of the last verse of the Battle Hymn of The Republic two weeks ago. The expunging of this beautiful, moving American work from hymnals over the past generation is a genuine tragedy.

A heartfelt thanks to any and all who had any part in presenting these two performances and, to all, an unashamed “Merry Christmas” — in every sense of the phrase.

2 of my kittens (the 3yr old in avatar and 15 week old one) and I just sat enthralled by this.

The USAF band is playing throughout DC over the next week or so.

All Obama’s horses and men can’t dethrone the King of Kings and Lord of Lords.

All Obama and his lies and agendas, all of Islam’s lies, conquests, frothings, threats, bombings, killings and beheadings (22,000+ since 9/11/01), and all of Mohammed’s mad delusions can’t stop the Truth from being The TRUTH.

There is a more excellent way – The Way of Love, Truth and Life.

God’s Kingdom has no end. Obama and his kind are just one more evil blemish and blight upon the history of mankind.

A most excellent video! A very cool thing for the USAF Band to do. Thank you for the post.

one of the best moments was around 448 or so when the younger (25?) guy hugs his girl as they are both smiling.

It may be a great performance and all, but why is the Air Force band playing religious music? This can’t be legal… It is illegal to put up religious paraphernalia on a military installation so how can they play this music in a public museum? I disagree also with all of you saying “Obama’s America” doesn’t put up with this… It’s the fact that not everyone shares your views. We don’t all force other religions and atheism down your throat, so you shouldn’t be able to shove the “King of Kings” down mine.

This is why it’s illegal.