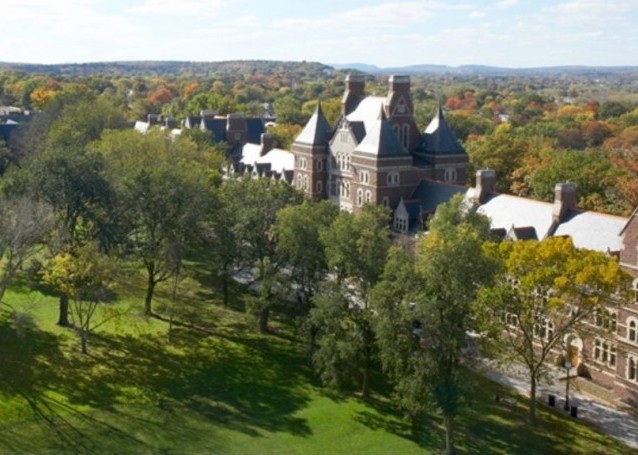 Several dozen universities have issued rejections of the academic boycott of Israel passed by the American Studies Association, many with forceful statements.

Among the most forceful was Trinity College in Connecticut, whose President and Dean of Faculty issued a stinging rebuke in a letter to the ASA President (emphasis added):

To The Immediate Attention of the President of the American Studies Association:

Our Dean of the Faculty, Thomas Mitzel, and I wish to go on record renouncing the boycott of Israel on the part of the ASA.

Trinity once years back was an institutional member (we were then advertising for an open position), and apparently some members of our faculty are individual members. Were we still an institutional member, we would not be any longer after the misguided and unprincipled announcement of the boycott of the only democracy in the Middle East. The Dean and I oppose academic boycotts in general because they can so easily encroach upon academic freedom.

In this strange case, why the ASA would propose an academic boycott of Israel and not, for example, of Syria, the Sudan, North Korea, China, Iran, Iraq, or Russia escapes rational thought. Trinity has participated in the Rescue Scholar program since its inception; we have welcomed scholars from some of the most repressive countries on the planet, and it is inconceivable to us that we would ever be welcoming a Rescue Scholar fleeing Israel for political reasons.

As President of the ASA, you have tarnished a once distinguished association.

As mentioned last week, a group of 21 professors issued a highly pejorative letter excoriating the President. The letter was reported as reflecting faculty opposition to the boycott opposition.

Apparently other professors, however, are pushing back against the narrative that the faculty supports the boycott, issuing its own letter of support for the President and Dean of Faculty.

A Trinity faculty member just forwarded to me a letter signed onto by a growing group of Trinity faculty and emeriti faculty ( 34 as of this writing) supporting the college’s strong statement against the boycott:

We, the undersigned members of the faculty of Trinity College, write to express our gratitude and support for the position you, the two senior academic officers of the College, have taken against the recently adopted call for an academic boycott of Israeli institutions of higher education by the American Studies Association. In taking this clear-throated position against the ASA’s condemnable boycott proposal, you align yourself with the broad consensus of academicians and leading institutions in American higher education. From the American Association of University Professors to the Association of American Universities, to eight former ASA presidents – the message is crystal-clear: academic boycotts are anathema to our undertaking, because – whatever their intent – they encroach upon academic freedom. Thank you for affirming this essential principle at this time.

As with the letter attacking the President, most of the signatories are from the Social Sciences and Humanities. Together, the two groups (as of this writing) represent about 20% of the faculty.

I guess these professors have not drunk the free government-issued Kool-Aid, labeled “Mandatory Refreshments for all faculty meetings.”

It can happen – it will happen.

BTW – home schooling works for k-12, so why wouldn’t it work for college, B to PhD?

It works. Sitting in the basement of my house for a set number of hours every day, I taught myself two classical languages, one of which was revived and is in use in Israel.

I’m sure that the 22 professors who support the boycott will recognize that they are in the minority now that “the majority has spoken”.

Professor, you, Alan Dershowitz and Daniel Pipes should challenge the top three supporters of the ASA boycott to a debate and put it on YouTube to be picked up by media outlets.

When American academics are trying to mainstream a boycott of Israel a mere few decades after the Holocaust, they are playing with fire. And they’ve been “educating” the impressionable undergrad tinder.

Yes, like that Israeli (or Israel-supporting) kid (can’t recollect his name) who went to the Oxford Union and won the debate hands down by spinning the topic on its head. It was something like “be it resolved that Israel should not exist or Israel should be condemned”. He agreed and his argument was an exquisite defense of Israel.

[…] thirty-four current and emeritus faculty have sent President Jones and Dean Mitzel a different letter, one that praises them for speaking out against the […]