Teens dress up as superheroes and spread kindness to strangers

Teens dress up as superheroes and spread kindness to strangers 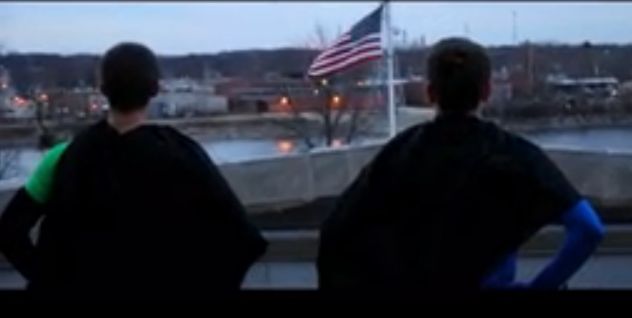 Two teens from Illinois want to teach others that you can save someone’s day through simple random acts of kindness.

High school juniors Zade Abdullah and Kyle Nutt have been posting hilarious videos to their YouTube channel for a year and a half, but their latest creation has the duo providing acts of kindness instead of comedy.

“My parents always wanted me to do good and 16-year-olds are stereotyped for being rotten kids,” Abdullah told HLN. “We wanted to show people that all 16-year-olds are not like that. We can be good and do good in the community and make the world a better place.”

The Dixon, Illinois, teens did what they had to do to spread the word about small acts of kindness. They put on tights.

The duo dressed up as superheroes and proceeded to surprise unsuspecting strangers by paying for a meal at a drive-thru window, handing out poinsettias, paying for the movies one shopper couldn’t afford, and various other acts of kindness.  A friend helped to capture it all on video.

They’ve got a sense of humor too, aside from just the gallivanting around in tights:  they even bring some cops donuts, among a few other chuckle-inducing moments.

Admittedly, the teens say early on in the video that they’re just “two unemployed sixteen year olds,” which may leave some asking where they got the money for some of their acts of kindness.  Perhaps it’s best to just assume it was money earned at a summer or prior part-time job or otherwise.  I think the point is to focus on the message.

And the message is a refreshing change of pace from some of the negative things that often get posted online these days.

They also inform others that tights are not necessarily a prerequisite.

“So you don’t have to run around town in tights, although if you want to, it is pretty fun.  But in all seriousness, every single little act of kindness gets passed down and slowly makes this world a better place.”

“We hope you guys understand the message we’re trying to send. You can all be superheroes, it’s time you used your powers.”

In another article on the boys’ effort, we’re reminded by them that there is still plenty of good out there, as saukvalley.com reported.

“There is faith in humanity,” Kyle added. “It’s been pretty rough with shootings, the economy, and all these bad vibes going around. We really just wanted to show people this world isn’t doomed, and that there’s still people with good hearts.”

Well done, gentlemen, well done!
I’ve told our children for years, if people only spent as much time doing good things as they do doing bad things, imagine our world!

Kudos to them, and thank you for sharing.

Illinois, eh? Only a matter of time before some bureaucrat digs up a law or regulation they are breaking and puts a stop to this wanton non-governmental largess.

I was noticing that they wore symbols of the 60s hippies, who have gotten into positions of authority now. I figured they’d go around citing codes and regulations to shut down commerce.

I wish I could give this story and these kids 10 thumbs up!! Made my day 🙂

I’d be honored to meet these young men, then insist on meeting their parents……….so I could shake their hand.