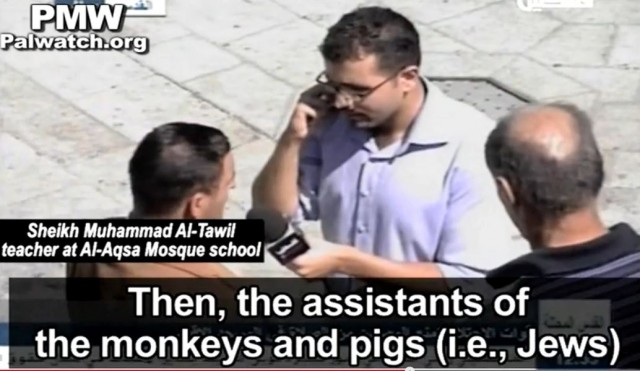 The reason there is no peace in the Middle East is that Palestinians believe this, teach it and put it on their television, via Palestinian Media Watch (h/t @haivri):

Ah, that could be Martin Bashir’s next news job. He’s be welcome at PA TV, he’s already got the right mindset.

Herod was a genius. People he never heard of are fighting for it.

Well, I suppose that is a promotion from “descendants of monkeys and pigs”…

Jews are the quintessential children of God. The insult of “monkeys and pigs” is wasted on them. Perhaps the Sheikh is projecting his own uncertain faith.

I wouldn’t let such a ridiculous comment from them bother me since they are the bastards of Abraham.

Didn’t some scientists say that human beings are the result of trans-species sex between monkeys and pigs? Somebody ought to tell that sheik about his ancestry.

In re Temple Mount, the Muslims have all got their thobes in a wad cuz they believe that to pray in a place is to lay claim to it. That’s why after destroying churches and monasteries in Egypt they went and “prayed” in them because that signified that those spaces now belonged solely to Islam.

Therefore, Jewish prayers on Temple Mount is anathema to them because it signifies the Jewish reclamation of the Mount.

Frankly, the world body ought to be slapped upside the head with this garbage about the “third holiest site in Islam”, my rear end. So Jews must be denied a first holiest site in Judaism so Muslims can do what Muslims do: steal people’s lands, claim some sort of connection to Mohammed to ratify their theft, then try to rewrite history to establish some faux Islamic provenance to the site.

Didn’t some scientists say that human beings are the result of trans-species sex between monkeys and pigs?

Yeah. It’s a brilliant theory… except for the little wrinkle that such a union would never produce offspring.

Apart from that one minor glitch, it’s truly brilliant.

Hey, Muslims! How come you can’t defeat people who are the descendants of monkeys and pigs? Why do they constantly succeed where you fail?

How smart does that make YOU?