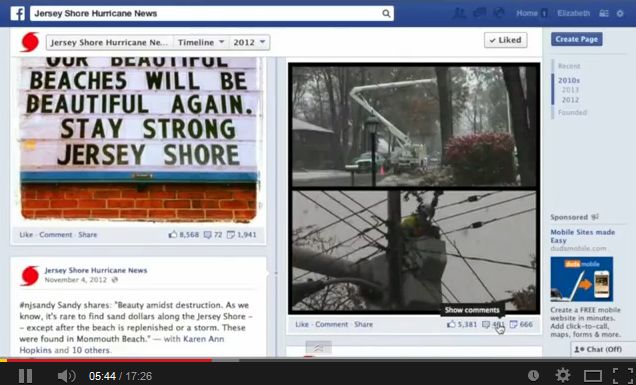 A college student’s documentary as part of a senior project highlights the impact of social media after Hurricane Sandy, and I think illustrates the role that such communications played in bringing people, community, and information together during a time of need.

From Newsworks/Down the Shore blog:

A new documentary by a Rutgers University student focuses on the social media response to Superstorm Sandy.

Herlihy, whose family lives at the shore, produced the documentary as part of the final requirement for her minor,  “Digital Communication, Information and Media.”

“Through this minor, I have been able to explore various forms of new media and study its expanding role in our digital society,” she said.

I was glad to see someone highlighting the role that social media played as a support structure for people after Hurricane Sandy.  As someone who lives in NJ and can still remember the storm as if it were yesterday, I frequently recount for others how helpful social media was to so many people during this time.

From a communications standpoint, it was an experience that’s hard to describe.  Immediately following the storm, most of us in the state were left without any power for many days or weeks, some for even much longer than that.  There were no phone lines, no televisions to let us know what was going on.  If you were lucky, you could get a radio station, but not everyone had that.  It was an eerie sense to feel so disconnected at a time when information was so crucial to people in the state.  But one thing that many in NJ realized could still connect us to the outside world was social media.

Especially for those hardest hit along the Jersey shore, social media proved to be far more of a tool in helping people.  As you’ll hear in the video, some used social media and digital communication to help disseminate and coordinate information about individuals who needed to be rescued, and about others who needed supplies.  Many took to Facebook and Twitter to help coordinate recovery efforts, and social media’s far reaching capabilities brought people from all over to come in and assist with efforts.  Food, supplies, blankets, whatever people needed, much of that was also coordinated through social media.  The medium of social media became a primary tool in disseminating information and coordinating responses in such a direct way that many had not necessarily experienced before.

And over time, social media has also become a vehicle through which many have been able to connect and begin to heal in the aftermath of the storm.

One of those interviewed in the video explains that she hadn’t used Facebook very much until Hurricane Sandy, and then it became an invaluable tool in coordinating support in cleanup efforts.  She later describes bonding with volunteers over the last year.

“You really make concrete bonds with people when you’re working shoulder to shoulder through the worst of times.  And the truth is, it’s really the beauty of the storm.”

In the days and weeks after Hurricane Sandy, we witnessed through social media an outpouring of support in and around so many communities as people organized and stepped up to help each other out.  It’s true that many people also bonded and forged relationships through those communications.  It was truly an amazing example of one of the more positive sides of the power of social media.

It’s nice to see some of that sentiment captured on video in this college student’s project, and I’m thankful to have come across it.

…most of us in the state were left without any power for many days or weeks, some for even much longer than that.

But apparently cell towers and smart phones all have some mysterious power source to keep them alive.

Non-stop trips to the car to plug in the cell phone, that’s what most of us did. I can’t explain why we could get through on cell phones to be able to text and access social media when much of the time calls would not go through (some eventually did, but it was very sporadic), but that’s how it was.

Well, all very nice, but I’ve yet to be in an emergency situation, or even a merely annoying one, in which media of any sort (aside from radio) functioned at all. And radio, being one-way, wasn’t of much use. The last “emergency” around here was eight months ago, when a little snow in Massachusetts sent the governor into full panic mode, and he ordered all traffic off the streets. Power was out, which means no heat, and in New England in February that’s an emergency right there. And there were indeed shelters with heat. But nobody could get to them since the police were keeping everyone off the roads. And radio, being one-way, didn’t enable anyone to ask how the hell we were supposed to get to the damn shelters except by using the roads.

Now of course the problem wasn’t really New England weather, or snow, or crappy power infrastructure, the problem was Deval Patrick. And social media can’t do much about a guy like that.

What irritated me was Gov. Christie’s wife going on TV begging for funds? My question is where are the funds the taxpayers put in?

has anyone accounted for the money from the feds or donations?