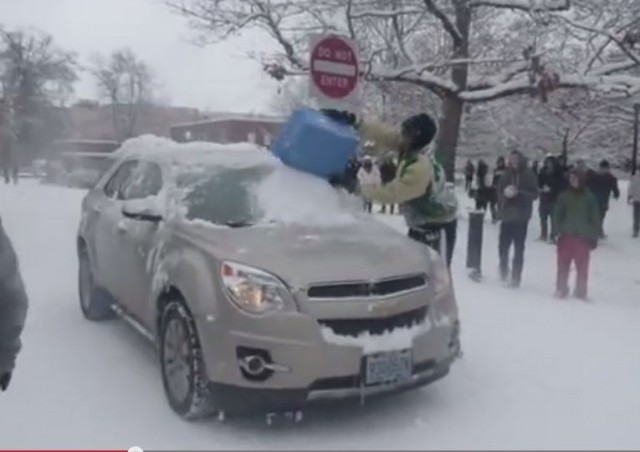 This is how a People self-destructs:

With a little help from their “friends”:

First they came for the couch burners:

Then the snow hooligans:

Will they be checking backpacks?

But only when Islamists demand it:

Just a guy in the neighborhood:

Trying to think of the right name … Collegecare?

Good luck with that:

Having gone through both, I can say with certainty: No. It’s. Not.

Who runs that place, anyway?

To Democrats, the War on Women worth fighting:

last time someone tried to block my crown vic by doing crap like that with snow he found out I don’t have antilock brakes.
and I wasn’t going to hit a wall to avoid him.
he got out of the way just in time.
then I got out and introduced him to what a wood hook is when he tried to get away in his car.
not sure but I suspect he learned a lesson when he found the holes in his car.

If folks were throwing hard objects at my windshield and I had my kids with me, I suspect that guy trying to block the car might have been very, very unhappy.

“But officer, I was scared and my foot slipped”.

The Onion had an article this week that quoted a 24 year old Film School student complaining about Student Loans.

“I just don’t know how my parents are going to pay off my student loans. If I get into a good Graduate School – they may have to declare bankrupcty!”

Most Epic Game of Beer Pong Ever Lands Frat in Trouble

Leave it to the industrious students at Lehigh University, known for its engineering school, to construct the most elaborate beer pong set-up ever.

Administrators weren’t impressed, though, and suspended the school’s Chi Phi fraternity chapter after the photo, which was reportedly taken Dec. 6, began making the rounds online.

The chapter was suspended Wednesday, according to a post on the Lehigh Greek Community blog, which is run by the school’s Office of Fraternity and Sorority Affairs.

“This suspension comes pending the investigation of allegations of University policy violations by the chapter on the night of Friday, December 6, 2013 including providing alcohol to minors, drinking games, hosting an unregistered social event, and irresponsible distribution of alcohol,” read a statement posted on the blog.