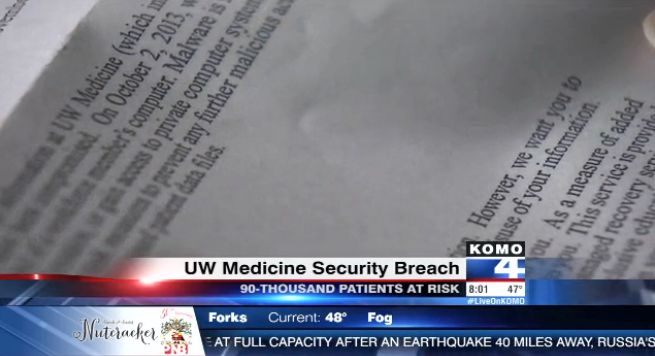 The personal information of approximately 90,000 patients of Harborview Medical Center and University of Washington Medical Center, which are part of UW Medicine, has reportedly been compromised as the result of a malware attack that affected a facility computer that stored patient data.

Early last month, a UW Medicine employee opened an email attachment that contained malicious software. The malware took control of the computer, which happened to be storing personal information from approximately 90,000 UW Medicine and Harborview Medical Center patients, according to a UW Medicine news release.

UW Medicine is now reaching out to the affected patients and has also set up a call center to work with victims.

While the breach occurred in early October, patients are now being notified by mail.

A statement published by UW Medicine indicates that patient information was not believed to have been specifically sought or targeted, according to the results of an internal investigation.

The statement also indicates the FBI is currently investigating the matter, and some patients may be contacted by the agency as part of that investigation.

“…A statement published by UW Medicine indicates that patient information was not believed to have been specifically sought or targeted,…”

Maybe not, but the surest sign of idgitry at the top of the UW feeding chain is the failure to acknowledge that the miscreants will surely abuse such information if given half a chance before they’re caught.

The solution, here, is not more security, more intrusion into the private lives of the patients, more draconian counter-measures. The solution is to take away the target. Period.

And yet, our 60/80% Obamacare website we should be using?
Of course, there is no criminal or civil “downside” to breaches of security on that site, if I recall.

Not to mention all the security experts who said it wasn’t secure.

At least when companies and other non-governmental institutions allow the “leak” of data, there are consequences.

Was that email from Barry Hussein?

For all intents and purposes, UW is the State of Washington. I can pretty much guarantee that there is a policy against opening attachments unless they come from inside the system. Also, nobody will be disciplined due to our benevolent public sector unions.

And anybody who sues the state over this will find out the true purpose of our office of the attorney general.

Okay, completely off topic, but how do people put an image in the little boxes by their names?

Thanks for any information.

The critical issue is what, if any, impact this will have on the Husky football team next season.

I always read about a hacked site notifying potential victims, but what are they (the victims) supposed to do? This is going to become critical as Obama’s website fiasco leads to hundreds of thousands of potential victims.

The security breaches aren’t the issue with the healthcare.gov site; using it as intended gives all your personal information to every damned communist front group in the world.

At least with private-sector criminals , there’s some recourse.

Maybe it is time for the Mafia to take over Obamacare…..

“Nice body youse gots there. Maybe youse wants some insurance to make sure it stays that way.