The allegation was that the reaction was racist.

From the ever-reliable Salon.com, The media’s Michelle Obama problem: What a selfie says about our biases

More than anything, the response to these latest images of Michelle Obama speaks volumes about the expectations placed on black women in the public eye and how a black women’s default emotional state is perceived as angry. The black woman is ever at the ready to aggressively defend her territory. She is making her disapproval known. She never gets to simply be.

Maybe the first lady is irritated with her husband or someone else, maybe she’s indifferent, maybe she’s thinking about the long plane ride home, maybe, just maybe, she’s recalling Nelson Mandela’s life and legacy. We will never know.

Meanwhile, the Internet is speculating about Michelle Obama’s mind-set, her motivations and the state of her marriage because if a married black man, always on the prowl even if he is the commander in chief, is seen smiling next to an attractive white woman, well, that’s curtains for the marriage. The white she-devil strikes again! The first lady can’t win. Last month, Michelle Obama was a “feminist nightmare.” Today she is angry and on the verge of losing her marriage.

From Oliver Willis of Media Matters (tweeting his own opinion, of course):

(And sexist too, also from Salon.com — The sexism of “selfie-gate”: America’s dangerous suspicion of women working with men)

And the time before that?

And the time before that?

And the most famous “look” of all: 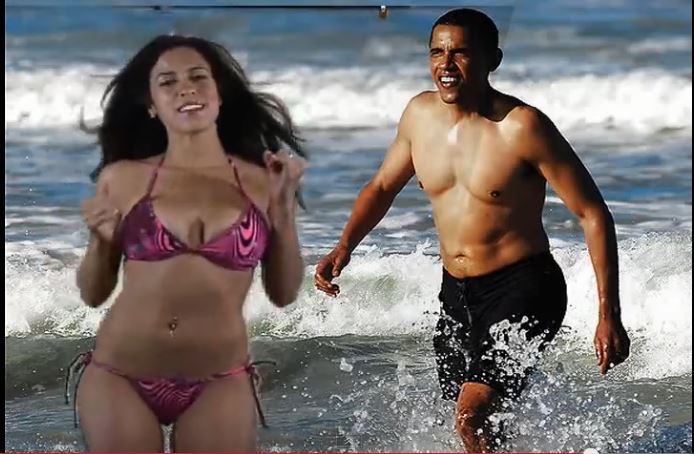 So, what Salon is saying is that Obama should not be sensitive to his wife’s perspective, because other people may think it is racist. Isn’t this part of a war on something?

That is because they are a bunch of goobers!

OLD FOLKS in their SIXTH DECADE of Life trying to act like 14 year olds…..

Snark Snark – for the humor impaired.

Angry, is Michelle Obama’s natural state. She is a leftist, after all. She has to force herself to appear happy.

Well, he certainly wouldn’t give that Cali NOW chick a second glance.

Juxtaposed next to an Obama selfie, a half-naked Geraldo selfie screams “Gravitas!”

from the first photo, showing Barry adjusting the phone, you can tell that our Narcissist-in-Chief was thinking ” yeah, dat’s juxtapose I was lookin fo’…”

Is there a card game? I’ll call your selfie and raise you one blond — “What’s with the Barbie thing?” Maybe that’s what Barry and Tiger Woods talked about.

While not raaaaacist, THAT was just silly.

What, did Plante forget the old truism…?

“Helle hath no fury as a woman scorned”

Baracula could have ignored her, and not a problem, see?

And implied that one of Santa’s reindeer was Red.

The Easter Bunny is a healthy pink. They only turn gray when they get old. No one can claim dominion over the Easter Bunny. He is his own bunny.

So reassured to learn that Oliver is a top expert on black women!

That move by Mrs Obama to seat herself between her husband and the blonde seems to indicate that “Yes, she just might be angry” with his behavior.

This is why independent photographers aren’t welcome to take candid pics of Obama. Such a to-do over what the actor does when he’s not in role. Gee, you’d think this guy really was the President of the United States.

They don’t want candid pictures of him, because somebody’s going to figure out he’s doing drugs.

I think a man would have to be unmarried – and possibly a virgin – not to think MO is pissed at BO.

I was over at the Gateway Pundit watching the trolls castigate the blogger for carrying the story, and then I sauntered down to the local gym, and watched CNN run a LONG story about it. They weren’t talking about the reaction to it, they were talking about the incident itself.

So, why’s it wrong for a “right-wing” blogger to carry a story that’s also being carried on all the major networks? And, if CNN is spending an entire segment on the story, how can it possibly be a FOX distraction?

Having been married to a real Black woman, and not a Upper class version, I’d say that all those witnesses are the only reason there wasn’t a double homicide. Bet when they got back to the Suite the Secret Service thought Bill and Hill were back.

you should look up the pictures of “O” disposing the ashes of his “granmother” Muchella has a different outlook then.

I’d love to know what mischievous party who came up with the seating chart. Was it the KGB (or its modern=day equivalent)? Because its not like we’re trying to conclude some major alliance with Denmark as far as I know.

all the others refused to sit by the little prick

Sorry, but even before Obama-Care threatened to shorten my life, it wasn’t long enough to waste reading the words of idiot propagandists.

Obama is just telling the Danish PM that he has a Nobel Prize and more selfies to show her after the funeral at a secret location. That’s all.

Oh, and, they are both want to try electronic cigarettes, later.

Michelle’s problem is that she ate too many bad carbs at the WH Happy Holiday Party. She is now developing Oprahism.

Other than that, I don’t we need to read too much into these photos.

Obama girl gave up on Obama in 2014. Little Hope, Little Change for the better, I guess. And this reminds me of a bumper sticker I saw yesterday in town: “I’ll keep my money, you keep the Change.”

Doesn’t anyone else see this as inappropriate, juvenile behavior?

THREE heads of state were attending a funeral, but instead of acting like adults and dignitaries representing three nations, they were giggling, taking pictures, acting like 8th graders – isn’t that disgusting?

Michelle is the only one acting like a respectful adult.

No wonder she made him move and sat between Obama and the others.

I STILL cannot find it again anywhere but there was one photo of Obama in the far left corner seat, the Danish PM beside him and then at least one empty seat between her and Michelle. They were having a private conversation and Michelle was LIVID. There was simply no other way to describe the expression on her face. Whether she was angry about their juvenile behavior and/or their heavy flirting is for her to divulge or not. However, there could be no doubt that she was angry, very angry.
I think the photographer took that photo down and/or he/she was one that’s not as famous as the rest because it’s been impossible to find again. Although I DO think it was the same one because seemed to be part of the series we still see. Roberto Schmidt taking it down would make sense as he’s become an Obama apologist over the photos.

Has anyone mentioned how odd it is that Susan Rice and Valerie Jerrett appear behind the suddenly subdued Obama where before there were only suited men had been before? And that Susan Rice has her hand on the PM’s shoulder and it doesn’t look like the PM is pleased about what she is hearing. And then the picture with Obama kissing Michelle’s hand with Susan Rice drooling in the background?

and at he guy behind them in the suit is looking over his shoulder as if someone is telling him to get the h e double toothpicks out of that seat and let me in there right now!