“come and make troubles at my concerts, too: because Israel’s case is my case, Israel’s enemies are my enemies” 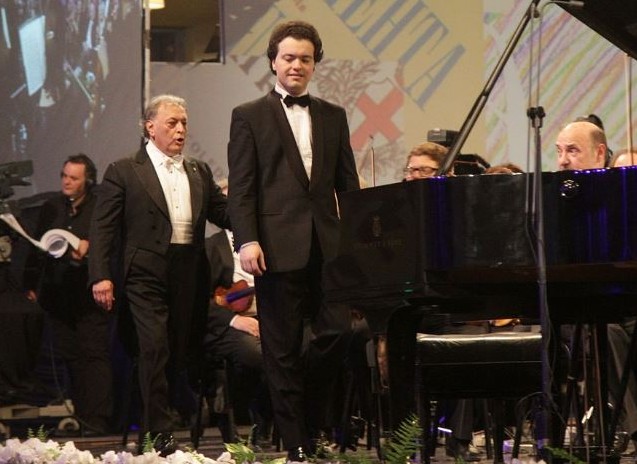 One of the tactics of the anti-Israel Boycott, Divest and Sanction (BDS) movement is to disrupt appearances not only by Israeli speakers, but also dancers, artists and musicians.

In 2010, for example, the Jerusalem Quartet had to stop its performance in London after a BDS protester would not stop shouting. In September 2011, a concert by the Israel Philharmonic Orchestra in London also was disrupted.

I had not been aware of the history of the Israel Philharmonic until recently.

The orchestra was founded as the Palestine Orchestra by a Polish Jewish violinist, Bronisław Huberman. Huberman anticipated the rise of the Nazis, and set about creating the orchestra to save Jewish musicians in Europe. In all – including the musicians and their families – he is credited with saving nearly 1000 people.

Throughout its history the Israel Philharmonic has featured some of the greatest contemporary musical talent.

One of the guest artists who performs with the orchestra, is two-time Grammy winning Russian pianist Evgeny Kissin.

A critic for the New York Times called Kissin “one of the most uncannily accomplished pianists of modern times.” He plays to full houses around the world and is one of the celebrities in the world of classical music.

Though Kissin, 42, has no plans to reside permanently in Israel, the Moscow native was granted approval by senior government officials for his citizenship request, which he filed for last year.

“There are other Jewish musicians who reach Kissin’s level of musical talent, but it isn’t every day that so acclaimed a musician joins the fight for Israel so openly and so uncompromisingly,” Sharansky was quoted as saying in a Jewish Agency press release.

When he started the process of applying for Israeli citizenship, Kissin explained his decision with an expression of pride:

“I am a Jew, Israel is a Jewish state – and since long ago I have felt that Israel, although I do not live there, is the only state in the world with which I can fully identify myself, whose case, problems, tragedies and very destiny I perceive to be mine.

“If I, as a human being and artist represent anything in the world, it is my Jewish people, and therefore Israel is the only state on our planet which I want to represent with my art and all my public activities, no matter where I live.”

Kissin was also defiant, challenging those who disrupt concerts of Israelis to now disrupt his concerts too:

“When Israel’s enemies try to disrupt concerts of the Israel Philharmonic Orchestra or the Jerusalem Quartet, I want them to come and make troubles at my concerts, too: because Israel’s case is my case, Israel’s enemies are my enemies, and I do not want to be spared of the troubles which Israeli musicians encounter when they represent the Jewish State beyond its borders.”

Kissin didn’t become an Israeli citizen just out of a sense of a pride. He also sees himself now as a representative of Israel who stands up to those who hate it.

Huberman’s Palestine Orchestra saved the lives of musicians who would have been lost to the murderous hatred of the Nazis. Nearly eighty years later, a guest musician of that orchestra’s has chosen to stand up the renewed anti-Semitism which practices its hate under the guise of BDS.

This is how it’s done. Evgeny Kissin has done a good and effective thing. I hope to see more of it.

“We either hang together, or we will surely hang separately.”

Jewish Pride:
The legacy of being The Chosen People.
The legacy of survival against all natural odds.
The legacy of an abundance of brains, talent in all fields of endeavor.
The legacy of giving the lie to those who claim God has removed His grace from His people and transferred it to others for rejecting Christ as a savior.
The legacy of introducing an immovable standard of morality, compassion and humanity to peoples of the world.
The legacy of a world calendar week based on a day of rest and a 6-day work week.
The legacy of the Ten Commandments.

>>”I want them to come and make troubles at my concerts, too: because Israel’s case is my case, Israel’s enemies are my enemies, and I do not want to be spared of the troubles which Israeli musicians encounter when they represent the Jewish State beyond its borders.”

This is how courage sounds and behaves. It is so rare these days that it has a kind of unwordly feel to it, an almost supernatural thrill. Where has it gone in our country?

Finally someone takes a stand!

Kissin is possibly the greatest classical performers of my generation. Buy his CD!

This at least kills the idea that Russians per se are anti semitic or that there are no Jewish people left ( that would be Poland ).

I am guessing 1) there will be no BDS at the Moscow Conservatory of Music .

Iirc the USSR was the first to recognise Israel . There certainly are some interesting Russian / Israeli dynamics .

Now to accompany his bold challenge, he should have a cadre of young Israelis who have been trained in the art of krav maga, to sit in various places around his concertos. When the inevitable moron protesters show up, they should be promptly beaten into bloody pulps.