Remains of missing POW finally return to widow after 63 years

Remains of missing POW finally return to widow after 63 years 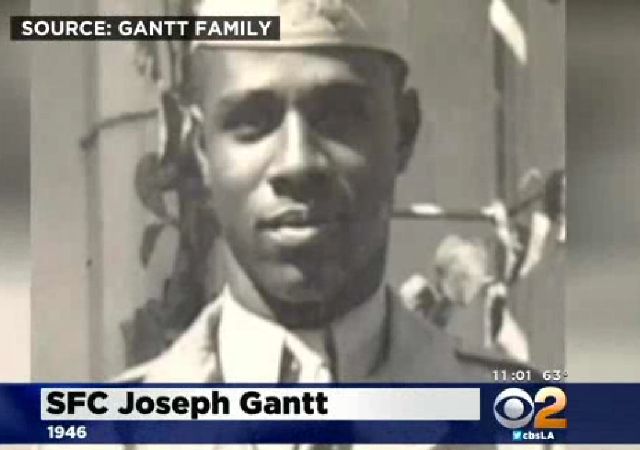 The remains of a missing POW returned home this week after more than 60 years, and a widow who never remarried will finally be able to say goodbye to her husband.

Army Sgt. 1st Class Joseph Gantt told his wife to remarry if he didn’t come back from the war. She told him no. He had a hard enough time getting her to say yes. He was it.

For 63 years, the World War II and Korean War veteran was missing in action and presumed dead, but Clara Gantt, 94, held out hope and never remarried.

On a cold, dark Friday morning on the Los Angeles International Airport tarmac, the widow stood from her wheelchair and cried as her husband’s flag-draped casket arrived home.

“I am very, very proud of him. He was a wonderful husband, an understanding man,” she told TV reporters at the airport. “I always did love my husband, we was two of one kind, we loved each other. And that made our marriage complete.”

Joseph Gantt joined the Army in 1942 and served in the South Pacific during WWII. He met his wife on a train from Texas to Los Angeles in 1946 and they married two years later. They had no children.

In the Korean War, he was assigned as a field medic, Battery C, 503rd Field Artillery Battalion, 2nd Infantry Division, when he was taken prisoner by North Korean forces in December 1950. He died in March 1951, it was learned later, but his remains were only recently returned to the U.S. and identified, said Bob Kurkjian, executive director of USO Greater Los Angeles Area.

An Army honor guard was among those who met the plane as it arrived at Los Angeles International airport, where the pylons were lit in red, white and blue to honor Joseph Gantt’s return, reports the LA Times.

Read the full story at the LA Times.

Thanks be to God, Clara Gantt’s Joseph is finally home. This story is simultaneously sad and wonderful, of love and faithfulness till death. How far our society has come from these values.

Noteworthy is the face of the female officer at Mrs. Gantt’s side.

DOD website listing all those who are finally accounted for.

Sergeant Gantt’s wife—what a woman. I am moved beyond measure by her love and strength. What a homegoing that will be one day.

He was there and lost his life while I was a little boy who watched each day’s newspapers that depicted the battle lines. Bless him and his wife.

Thanks for all of it.

A woman to whom a marriage vow meant something. It brings tears to my eyes because I am so unworthy compared to her.

This lady is Person of the Year. The best homecoming I’ve ever seen. God bless her.