Protests continue in Ukraine despite crackdown

Protests continue in Ukraine despite crackdown 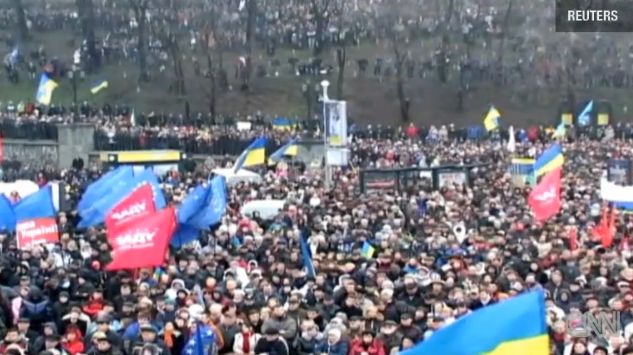 Protests in Ukraine continued on Wednesday as protesters persisted in their efforts to block access to public buildings after several days of unrest in Kiev.

The demonstrators who have laid siege to public buildings in this rattled capital expanded their protest overnight, blockading the central bank on Wednesday and setting up tents and lighting bonfires on the sidewalk outside.

Protest leaders had vowed to surround additional government buildings after the Ukrainian Parliament on Tuesday defeated a measure calling for the resignation of Prime Minister Mykola Azarov and his government.

The failure of the no-confidence vote pushed the battle for the future of Ukraine back onto the streets, where protests began over the weekend. Demonstrators allied with opposition leaders said they would not relent until they succeed in removing the government, including President Viktor F. Yanukovich.

But the protesters’ overnight goal of blockading the presidential administration building had not been accomplished by Wednesday morning. They did advance their sphere of control about 500 yards up a side street leading to Independence Square, which they have occupied, and erected a barricade near one entrance to the administration building.

After protesters had earlier blocked some government offices, police were able to clear the area around some sections of buildings and block the protesters from gaining access.

While police were able to create an entry point to allow access to workers in one building, the presence of the protesters is still creating great difficulty, according to BBC News.

The protests began last week and swelled into the weekend, triggered by the Ukrainian president’s sudden refusal to sign an association agreement with the European Union.  Many in the country prefer such integration with the EU over closer ties to Russia.  The protests have since grown into broader anti-government sentiment.

Ukraine’s prime minister has urged for calm and “responsible dialogue,” according to the Associated Press (via Huffington Post).

Meanwhile, Prime Minister Mykola Azarov, who survived a chaotic no-confidence vote in parliament on Tuesday, urged the opposition to end its blockade of government buildings and warned the western regions of the country, where local officials had announced protest strikes, that they may be left without federal funding.

“We must decide all this in a calm environment. Not in the streets, but in a responsible dialogue,” Azarov told a Cabinet meeting.

Three former presidents of Ukraine meanwhile have thrown their support behind the protests, according to BBC News.

Because obama and his lawlessness present an existential threat to America, certainly to the once-great America that so many of us loved, it is difficult for me to focus on other important issues, such as the protests in Ukraine. It should not be this way, but it is.