Protests continue in Ukraine as EU deal appears on hold

Protests continue in Ukraine as EU deal appears on hold 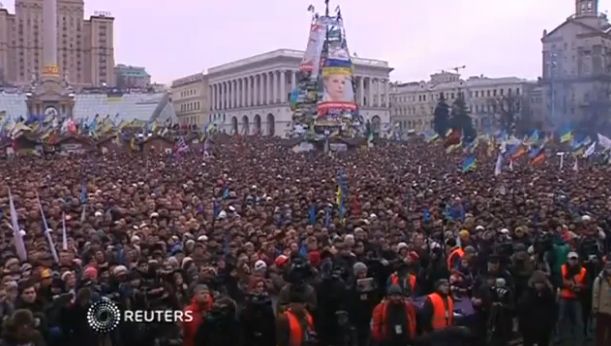 Anti-government protests again continued in Ukraine over the weekend after nearly four weeks of demonstrations, sparked by President Viktor Yanukovych’s refusal to sign an association agreement with the European Union.

But after talks over the agreement had resumed earlier in the week, it seems work has been placed “on hold,” according to remarks made on social media by an EU official on Sunday.

The European Union has halted work on a trade agreement with Ukraine, an official said Sunday, after Kiev failed to show “clear commitment” to signing the deal.

Stefan Fule, European commissioner for enlargement and European neighborhood policy, said on Twitter that the words and deeds of Ukrainian President Viktor Yanukovych and his government on the proposed pact were “further & further apart. Their arguments have no grounds in reality.”

Fule said he had told Ukrainian Deputy Prime Minister Serhiy Arbuzov in Brussels, Belgium, last week that further discussion on the agreement was conditional on a clear commitment by Kiev to sign the deal, but he had received no response.

“Work on hold, had no answer,” he tweeted.

#Ukraine:told deputy PM #Arbuzov in BXL &after that further discussion is conditioned on clear commitment 2sign.Work on hold,had no answer

Meanwhile, Republican Senator John McCain and Democratic Senator Chris Murphy have been in Ukraine this weekend, where they addressed a large crowd of anti-government protesters and expressed support for their cause.

A showdown between Russia, on one side, and the United States and the European Union, on the other, drew closer here Sunday, as two American senators told a crowd of hundreds of thousands of protesters that Ukraine’s future lies to the west, not the east.

“We are here,” said Sen. John McCain (R-Ariz.), “to support your just cause: the sovereign right to determine [Ukraine’s] own destiny freely and independently. And the destiny you seek lies in Europe.”

The crowd chanted the Ukrainian word of approval — “molodtsi” — but the president whom the opposition so despises, Viktor Yanukovych, is heading Tuesday to Russia to cement deals involving natural gas purchases and financial credits to prop up his country’s ailing economy.

While perhaps not as large as their rival protesters’ demonstrations, pro-government crowds gathered over the weekend for rallies as well, according to the Washington Post.

A smaller rally of about 15,000 people, also arrayed in Ukrainian flag paraphernalia, showed its support for Yanukovych in a hilltop park near the parliament building. “We’re here so this can all end peacefully,” said Lyudmila Akhmedzhanova, 50, a teacher who, unusually for a Yanukovych supporter, comes from western Ukraine. “And we’re here for the European Union.”

She said she was not opposed to an eventual alliance with the European Union, but thought now was not the time. “We’re supporting Yanukovych because we need to wait a little,” Akhmedzhanova said. “With time, we can come to a European level.”

At promptly 4 p.m., the pro-Yanukovych crowd dispersed. “These are all bureaucrats,” said Bogdan Vuyko, 57, who lives in Sevastopol and came to observe both camps. Most of the pro-government demonstrators were not from Kiev, he said. “They have to get home and get to work tomorrow.”

Vuyko said some of his friends had been pressed into attending the pro-government rally by Yanukovych’s Party of Regions, which organized the event. “Nobody’s actually listening to the speakers,” he said.

Do foreign Upper House dudes or failed Presidential candidates appear at rallies against the US government in the US?

McCain is there because he recognizes, when our putative executive will not, that the question here is whether Ukraine will proceed on a course to independence and integration with the rest of the European economy or return to the Russian sphere of influence.

And if the United States is ever threatened by the looming shadow of Vladimir Putin, I pray God that our friends and allies around the world will come to our aid and support to resist him.

This is also a struggle between Ukrainians. Generally, people west of the Dnieper are pro-western, and those east are generally more pro-Soviet-Russia, especially those in “Russian Crimea”.

As a resurgent Russia alternately threatens and promises Ukraine, there is a tendency to take the “friendly offer” from Russia and leave anything from the weak-willed, hand-wringing west, alone.

My friends in that part of the world are astonished at our weak leader, but moreover, they are more astonished that we haven’t tossed him out yet. But for the 17th Lousy Amendment, we probably could… but try ‘splaining American political machinations to the average Ukrainian. Or the average American Low Information Voter for that matter.

TrooperJohn you are dead on the mark regarding the old Soviet “enhancement” of the Ukraine. Don’t forget after Stalin decimated the Ukraine pre WWII he expanded their borders to dilute, even further, the Ukrainian population within their boundaries. Toss in the Lvov region of Poland and some other border changes Stalin did manage to flood the Ukrainians out of majority.
Bush Senior put their potential on hold when he stood in the very same square and told the Ukrainians basically “not so fast”. After their first independence from the Soviet sphere it was the Ukraine that voluntarily relinquished “their” nukes to the west.
Another interesting aspect of the Ukrainian history is that they are, or were, represented in the UN for what that is worth. This was one of Stalin’s tricks to allow the formation of that, ahem, august body. The Sovs got three votes to counter the unity, at that time, of the US, GB and, nominally France. I could go on….suffice it to say that I am all for an independent Ukraine from Russian/Putinesque domination.