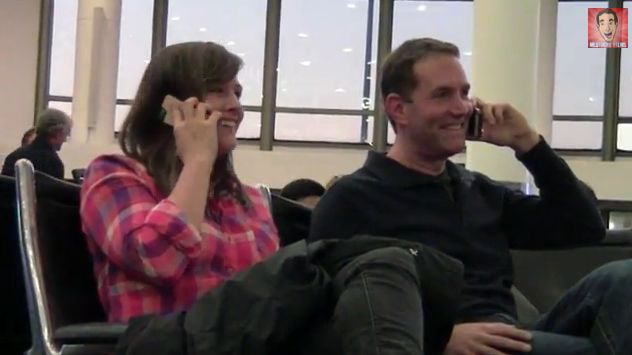 We’ve all likely encountered people who talk on their cell phones in public, or (gasp) done it ourselves at some point.  Admittedly, sometimes it’s almost unavoidable at a place like an airport where you might be trying to coordinate the other details of your travel.  But other times, it’s probably avoidable.

One prankster had a funny lesson for reminding cell-phone talkers that others around them can hear their conversations. “Don’t you hate when people talk loudly on their phones in public? Why not have some fun with it and “crash” their calls!” he posted on his YouTube channel alongside the following video.

Greg Benson, actor and funnyman, has a new prank video climbing the YouTube charts. “Cell Phone Crashing at the Airport” has Benson and his hidden camera (operated by wife Kim Evey) crowding people at an airport as they talk on their phones.

Benson, on his MediocreFilms, has crashed cellphone conversations before — at a park, a soccer game, on the streets of San Francisco. He responds to others’ conversations into his own phone. It takes a moment for people to register the pleasant-looking man invading their space.

The reactions from the unsuspecting cell-phone talkers are amusing – most don’t seem to know what to make of the fact the man sitting next to them just happens to be answering all their questions and responding to everything on their end of the conversation.

Personally, I didn’t really find these particular cell phone talkers to be all that loud.  If it were a restaurant, now that might be a different story. But I guess this serves as a reminder nonetheless – you might want to find a less public corner of your location if you’re going to have a conversation on your cell phone in a public place like an airport.

Personally, I don’t care if people talk on their phones in public, and I think people who think it’s rude need to stop being so self-absorbed as to feel slighted because somebody is simply talking to somebody other than them. If any of those people had been talking to a physically present person and that guy had butted into their conversation like that, most people would think it was very rude and be rightly offended. But that was hilarious.

I’m pretty sure you won’t mind the when I get a baby rattle out and make a little bit of wonderful ambient noise then?

After all, life is so much more enjoyable with interesting sounds that command your attention, and who would want to complain at people expressing themselves in public and making sure that everyone is forced to experience real life in all it’s glory.

You ain’t heard loud cellphone conversation until you get on a bus in Asia. I wish I spoke enough of the language to prank people like this.

Having picked up some calls from Asian countries, I wonder if there is some sort of level limiter in action. Sometimes I can just barely hear the other person.

(Modulation takes up bandwidth, so a volume limiter on either the transmitter [phone] or in the repeater [cell tower] makes sense, if not overdone.)

You got a thing going there, Phillep cuz often the sound quality can be horrible. Either static or something about it that makes comprehension not easy. It’s better to text.

Anyone can have a cell phone conversation and speak softly. I talk to people all of the time on my cell phone, including at airports and even on the plane (when allowed) and use barely a whisper. The person on the other end can hear me just fine, the person sitting next to me can barely hear me, and the person two seats over can’t hear me at all.

I learned a long time ago that when using a microphone, you do not have to yell. Probably from all the time I used to spend up in air traffic control towers as a kid (my dad was a controller). Those guys just whispered into their mics and they NEVER had to repeat themselves.

Will the majority of people ever learn you don’t have to speak loudly on cell phones? Judging from the people I see everyday, probably not.

Oh, yes. I also hate talking to someone on the phone who thinks he has to yell because I’m so far away. Sheesh. Earaches. What do they think phones are for?

In a restaurant recently, while having lunch, I was talking on my phone for business. I was sitting alone in a booth, talking in a normal conversational voice volume as if I were talking to a friend sitting next to me. After about 10 minutes, I hung up and then noticed when I turned my head the woman sitting in the booth behind me arching her back obviously to eavesdrop. When I gave her the hairy eyeball, she huffed and said “How rude to talk on you phone in a restaurant.” I smiled and said, “you’re just mad you could only hear one side of the conversation.” She huffed again and turned around. Her husband, sitting opposite her, shot coffee out his nose and belly-laughed, nodding at me. People need to just chill. I’d rather listen to someone talking on their phone doing something productive than the person next to me bitching about their roomate’s boyfriend at the top of their lungs.

As far as you go in what you said, but “Normal” for some people is “shouting” for others.

Students are expected to grift or boost any materials needed for the course. Materials may not be purchased or legitimately borrowed.