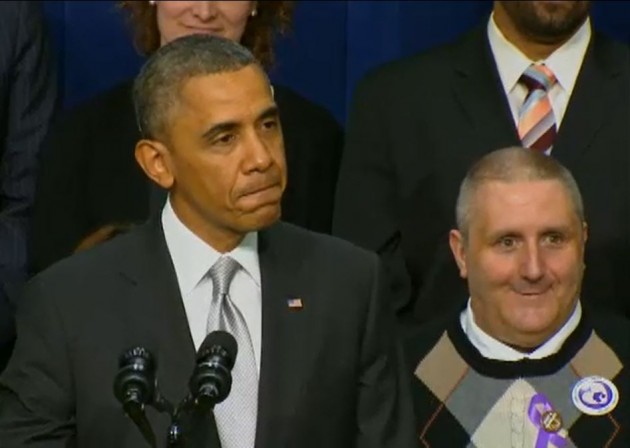 Take a look at the wording of this WaPo headline:

“Obama Suffers Most From Year of Turmoil, Poll Finds.”

Accompanying it is this photo:

The article goes on to describe the precipitous decline in Obama’s standing in approval polls:

His position is all the more striking when compared with his standing a year ago, as he was preparing for his second inauguration after a solid reelection victory. That high note proved fleeting as the president faced a series of setbacks, culminating in the botched rollout of his Affordable Care Act two months ago.

Some may think reporters and editors are simply clumsy or indifferent writers, and sometimes they are. But much of the time they choose their words (and photos) with exquisite and subtle care. They also realize that most people only look at the headlines and photos of most articles, and that those are therefore the most important elements, and that even people who do read the article often read only the first few paragraphs.

In thisWaPo article, the headline and photo have been chosen to suggest that Obama is a suffering victim—in fact, the greatest victim—of a series of unfortunate circumstances that have befallen him. He’s nearly a martyr. And the text (the excerpt quoted above is the second paragraph in the piece) reinforces that idea by this phrase, “faced a series of setbacks.” Passive voice; no actor.

The article’s only mention of culpability occurred in the third paragraph, and it’s a curious one:

…[I]t is the president who has suffered the most damage from his administration’s self-inflicted wounds and a year of partisan conflict that included a partial shutdown of the government.

Again, we have the president as sufferer, and even though here (finally!) the wounds are “self-inflicted.” But it is the administration rather than the president himself that is doing the damage. Note, also, that this observation is followed in the same sentence by a balancing reference to the government shutdown, which didn’t hurt Obama at all and was widely blamed on the Republicans.

All in all, a masterpiece of subtly crafted writing designed to effect a certain perception: that of a beleaguered president who is the suffering victim.

Now to the poll itself. In some ways it is encouraging—because it indicates, as do other recent polls, that people are not liking Obamacare and are not as positive about Obama or Democrats in general as they were just a short while ago. But certain of its findings are mind-bogglingly discouraging. An example of the latter is the following:

The president is back in positive territory, however marginally, on two important attributes — whether he understands the problems of everyday Americans and whether he is honest and trustworthy. At the worst of the health-care mess, bare majorities said no to both questions. Today bare majorities say yes.

Obama has recovered some credibility? Why? There’s also this, “A 26-point Obama advantage a year ago on who would better protect the middle class has fallen to just six points in the latest survey.”

It’s good that it’s fallen. But why does he still have any advantage at all?

so now being a victim of hubris is someone elses fault?

So now the WAPO solidifies it position as second only to the NYT as being on the garbage heap of printed media.

May they both quickly dissolve into nothing…

Why not a pic of Obama on the golf course for the nth time? Oh … its WaPo

The poor man in unpopular because his policies have devastated millions of families, all in the name of love, peace and unicorns.

Good intentions are no substitute for skill, care, knowledge and competence.

Obama as victim. Pathetic. It’s the American people who are the victims here, but typical lefty perspective…turning perpetrators into victims, and the real victims into the bad guys.

I guess we should feel sorry for Obama because he runs into a few obstacles as he tries to hurt us faster and deeper than he already has.
Rush Limbaugh knew what he was saying when he wished for Obama’s failure. Every set-back for Obama is a gain for the American people and their children

It’s the recurrent pitch from the thuggish left, acting like an abusive spouse … they only want good, and all problems come from the evil ones that resist them. Obama is almost like God, doncha know …

“after Morgan asked why Obama has faced so much opposition, and “Why is he struggling so much to really fulfill the great flame of ambition and excitement that he was elected on originally in 2009?”

“He made so many promises,” she began. “We thought that he was going to be – I shouldn’t say this at Christmastime, but – the next messiah.”

For decades the entertainment media has used conservatives as both villains and objects of ridicule in movies and, more importantly, on the TV shows an entire segment of out population devour. This portrayals were only weakly protested and few if any attempts were made to counter them.

Then Obama was sold as being far better than Jed Bartlet come to life and surprise- the low infos fell for it hook line and sinker.

What will make such people come back to reality? To realize the man sold to them as a messiah is not only incompetent but also a narcissistic bastard with sociopathic tendencies? Better messaging by Republicans might help but I fear for many the only cure will be to turn off the bleeping boob tube.

I recently ant through the old Deep Space Nine series, with a military dictator character, Gul Dukat, who is remarkably similar to BO.

Over-the-top, of course. The resemblance lies in the way the dictator could announce punitive policies is if they were the most loving and tender care of his adopted people. And to hear him talk about himself, he really thought he was being benevolent. The cognitive dissonance is vibrant in that one.

Is that Curly behind him in that sweater? I always knew 0bama was a stooge… (Nyuk, nyuk, nyuk!)

If the WAPO, NYT, LAT, and other left print media, along with the alphabet channels,feel the need to support Obama, then they should immediately revert their employees’ health care plans to Obamacare. Then let them weave their words of deceit.

Someone remarked on Neil Cavuto’s show last night, “Obama likes to be President. He just doesn’t like to work.”

Hey all of you haters, knock it off already! It is not his fault! He is like a leaf on the wind, being blown from one set of circumstances to the next. If only he was, I don’t know, the most powerful man in the world, then, maybe then, we would… What? He is? Really? Well in that case, SHUT UP!

He didn’t spend a huge amount of time on it, but Rush Limbaugh just referenced this post.

I talked to my friends in early ’09. they said ‘that poor Obama. The old dogs saw him coming. He didn’t have a chance, and they ganged up on him, he was naive’.
Obama has been milking this victim/underdog thing all along. I think the underdog thing comes in the newsletters they get.They are union members.
I thought of all the meetings Obama was having, the “Who me?” attitude. The how we are trying projection. But people are being damaged and hurt and ruined and it is yr fault. This is all unnecessary- Obamacare was completely an answer to nothing

I’m casting for a new remake of the Andy Griffith Show and have been searching everywhere for a Goober.

I’d appreciate it if you could put me in touch with the man to the right of Obama.

Things have gotten so bad that Obama, his wife and children have been sent off to Hawaii for 17 days to pick pineapples while forced to live on a migrant worker estate..

They must have gone a long way to find that man i. He looks like the village idiot on whom they have placed an argyle ( ugly ) jumper. Michelle was wearing one recently .

What is happening to American fashion? Argyle is not for fat lunatics or African American civil rights would bes.

I did they not see Gatsby?

I think that’s what they look like when they’re feeling a tingle running up a leg.

Or down a leg.

Kudos! This AM on the Rush Limbaugh Show:

RUSH: “Now, I got a post here at Legal Insurrection. And the poster, the writer is somebody that calls themselves Neocon….”

I’ll put this on the Tip Line also.