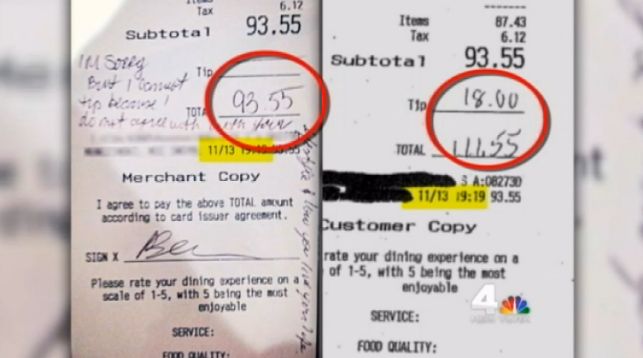 A gay waitress who claimed she had been stiffed on a tip because of her lifestyle is no longer employed by the NJ restaurant at which she’d worked, according to a statement posted on Saturday.

Dayna Morales, a former Marine and waitress at the Gallop Asian Bistro in Bridgewater, NJ, claimed last month that customers left a note on their receipt disagreeing with her lifestyle in lieu of a tip.  The story went viral when bloggers and media outlets picked up on it after a message from Morales and a photo of the receipt were posted on a Facebook page.

But the customers in question later came forward to refute Morales’ story, providing their copy of the receipt and a credit card statement showing not only that they never wrote such a note, but that they tipped the waitress.

Gallop Asian Bistro posted the following statement on its Facebook page on Saturday afternoon, indicating that it has parted ways with Morales:

The Gallop Asian Bistro has taken seriously the allegations made by Ms. Dayna Morales, and those made against her. Despite news reports to the contrary, this is not a simple, straight-forward matter and we have conducted our own internal investigation. The results of that investigation are inconclusive as to exactly what happened between Ms. Morales and the customers that night. However, in light of the investigation and recent events, both Ms. Morales and Gallop Asian Bistro have made a joint decision that Ms. Morales will no longer continue her employment at our restaurant. We wish her well in the future.

Overall, this has been an unfortunate incident for Gallop Asian Bistro, our employees, and our customers. We are dedicated to providing excellent Asian cuisine and superior service. We have the utmost faith in our management and staff and we welcome the opportunity to serve our customers.

Before Morales’ claim had been publicly refuted by the customers, the restaurant initially stood behind the waitress.  When the story first broke, a manager at Gallop Asian Bistro said, “We support Dayna 100 percent. She’s a wonderful person and a wonderful server, and we are extremely proud of her and the way she handled this situation,” reported NBC News4 New York at the time.

Donations for Morales then started pouring in, according to CNN.  Morales had indicated that she intended to donate the funds to the Wounded Warrior Project, while the restaurant planned to give matching donations to a local LGBT organization.

But once the customers came forward and Morales’ story was publicly refuted, the restaurant announced it would launch an internal investigation.  Its statement this weekend indicated that the results of that investigation were “inconclusive.”

Last week, several news outlets reported that the Wounded Warrior Project could not verify that it had received any donations from Morales.  Meanwhile, some of the donations made to a PayPal account set up in Morales’ name have been refunded, according to NBC News4 New York.

Yeah, much thanks to the customers who are apparently say they are true blue liberals and didn’t want this fraud to go on. How many libs would have just let the false narrative continue since it did them no direct harm?

Shame on the restaurant though, for not coming out and directly dismissing the waitress but instead going for the limp wristed ‘decided to part ways’. They should have fired her in a publicly humiliating way, to send a message to their customers that they don’t tolerate this kind of fraud from their staff. I suppose they were too afraid of alienating their LGBT clientele.

>>”They should have fired her in a publicly humiliating way,”

Quite right. Look back at their public utterances and actions. Each was informed by fear and political correctness. This demonstrates the Progressive cultural dominion. No one yet is really fighting back.

JackRussellTerrierist in reply to VetHusbandFather. | December 10, 2013 at 5:51 pm

Yes, all correct. And let’s not forget the restaurant standing up for Morales’ tacky display in the first place. It reflected poorly on the restaurant for her to go public with the original story even if it had been true.

Never happen! Can’t put any burden on a “protected ” class member. Has anyone ever heard of a false rape accusation resulting in a legal consequence for the accuser ?

Note for the future- if you donate to a cause you don’t already know well always use a Visa or MasterCard credit card. If the cause turns out to be a fraud you can dispute your donation through the card-issuing-bank of that credit card. You simply contact that bank and dispute the transaction as “fraudulent/not as described.”

The dispute is called a chargeback, you are automatically refunded your money and the recipient has to prove to the credit card company that they were entitled to your donation. You have up to 90 days to dispute the donation.

Not entirely true. The federal minimum standard is 60 days from the closing date of the paper statement on which the disputed charge first appears. However, banks have the ability to extend that. Also, Massachusetts residents have up to 5 years under Mass. state law to dispute charges on their cards.

The management of this place doesn’t seem very honest since they can’t conclude the waitress committed fraud (with themselves as unwitting accomplices) even with the credit card statement staring them in the face. I suppose some lawyer told them to go this direction so the wacky waitress won’t sue them. They’d never see a dollar from me.

I’ll take bets on the waitress both suing the Bistro and collecting unemployment…. double or nothing that the couple who disputed her claims are also included in the lawsuit.

Consider the cankered, twisted soul of a person who does this kind of thing, and the people who fan it and invest in it.

There you go. I very much doubt she thought this would ‘go viral’ or that she’d get donations. I believe she did what she did for attention within her existing social orbit, including her Facebook friends.

I haven’t evaluated her, of course, but there is a specific psychiatric condition that describes her behaviors and their motivation: Factitious Disorder, occurring either in the psychological or physical realm, wherein the person falsifies physical symptoms or *situations* in a way that define the person as innocently afflicted and worthy of pity, empathy, etc., in other words, they fake shit to get a deep psychological need for attention met.

Laypersons may know this condition better by the name for its most severe form: Munchausen’s Disorder and/or Munchausen’s by Proxy.

It sounds like this woman’s actions have very little to do with the gay activists and more to do with her mental health. She seems to match whatever her current self delusion to whatever current group be it cancer or gay. I knew a girl in college who used to send actual letters via mail to herself unsigned, of course, mocking herself. Sad. The blame and responsibility is all hers.

She also may not have made the donations to the Wounded Warriors charity as she claimed. Law professor Jonathan Turley analyzed a whole bunch of state and federal statutes she may have potentially violated. She could be facing some serious legal liability for this stupid stunt if she is prosecuted and convicted.

I think the real message here is “Never attend an overpriced eating establishment with ‘Bistro’ in it’s name.”

It would make an interesting book project to review the last 30 years or so in “racism, sexism, and homophobia” in America. We know that a significant percentage of reported acts of “Ismism” are faked by leftists, usually members of the allegedly targeted group. But it would be useful to find out precisely how many of these incidents are faked, how many real, and how many remain undetermined (no perp ever found).

It never says in any of the articles but instead of gay I think she is a MTF Transgender. I have some friends that are Tgirls that are fantastic persons, actually you would never guess they are not genetic girls. I recommend all, but particularly libertarians and conservatives to support them, many are veterans and are often patriotic as they cherish freedom.

That said, the TG community feels a lot of persecution and can be ‘fragile’ emotionally. This waitress probably was in that, and something set her off with this customer. But basically she forged a receipt and went public to shame the customer, only to backfire totally on her.

The right thing happened here but what a convoluted path.

Sure, I’ll support this community … when they start respecting Conservatives and Christians, especially the Catholics amongst us for whom they have a serious boner.

Wott wott, a lesbian “stiffed on a tip”?

The lesson here is to put the tip on the plastic and keep the receipt to avoid false accusations. That means this wack job has earned the enmity of all her colleagues both straight and gay. The IRS can get its full share of tip paid via credit and debit cards. Not so with cash.

Right now, she’s feeling not so gay and will feel even less so as her lie about repaying donations is exposed next.

Ok, here’s the problem with how I see it.

Based on JUST the receipts, there is really no proof as to the server having faked the whole thing, as when you go to a restaurant, you get two receipts when using plastic: One for the establishment with your signature and the amount of the tip and total charge, and your own personal copy. Since they’re separate, they could have very well written the note on the merchant copy and written what they claimed they tipped on their own copy.

Of course, the family had bank records backing up their claims, so that means the server definitely printed a new receipt and faked the note for attention. Which is really sad.

How would a customer know anything about your lifestyle? If I were a waiter, I doubt I’d be handing out bible tracts to my customers. It seems to me that, if something about you is likely to put some of your customers off, that you should keep it to yourself, even if your cause is righteous. If I were a restraunt owner, that decision wouldn’t be left up to my employees. After all, it’s the customer’s experience that is paramount, not your need for external validation.

I would not expect this type of behavior from anyone who served in the Marine Corp. Has anyone verified that she was in the Marines, and for how long?

Agreed. Marines usually display much more integrity than she has done in this instance.