Is history repeating itself with Iran? 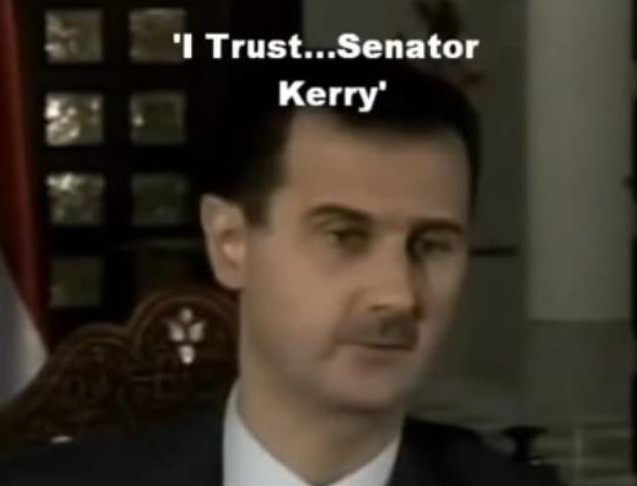 A few months ago a picture of John and Teresa Heinz Kerry having dinner with Bashar and Asma Assad in 2009 resurfaced.

The timing was awkward because it came just after the Secretary of State condemned Assad as a “thug,” and compared him to Adolph Hitler for his use of chemical weapons.

The problem with Kerry’s meeting with Assad isn’t just that it happened. It was the beginning of a relationship – with the approval of the Obama administration – in which the future secretary of state attempted to cultivate the dictator, apparently with the intent of weaning him away from Iran.

Even after Assad’s brutality towards protesters became undeniable, the Wall Street Journal reported that the administration wasn’t ready to give up on him:

The killing of at least 70 people around the central town of Homs in the past five days, according to activists, brought to an estimated 1,100 the total toll in Mr. Assad’s months-long crackdown and sparked tougher condemnation from the Obama administration. Secretary of State Hillary Clinton urged other Arab states, Russia and China to join in protesting the violence. …

Mrs. Clinton’s ambiguity highlights the frustrating U.S. courtship of Bashar al-Assad. For more than two years, Mr. Obama’s foreign-policy team has tried to woo Mr. Assad away from America’s regional nemesis, Iran, and persuade him to resume peace talks with America’s regional friend, Israel. For more than two years, Mr. Assad has frustrated the U.S. with the promise of reform and the practice of repression.

One detail in particular about the Obama administration’s first term outreach to Syria sticks out, “Mr. Kerry, meanwhile, became Mr. Assad’s champion in the U.S., urging lawmakers and policymakers to embrace the Syrian leader as a partner in stabilizing the Mideast.”

When it came to Syria John Kerry was out in front.

At best Kerry was simply wrong about Assad; at worst the legitimacy he conferred upon him by engagement emboldened the tyrant to believe that he could get away with mass murder.

Kerry’s record with Syria deserves more scrutiny now that his role in engaging with Iran is emerging.

We now know that the Obama administration had been holding secret talks with Iran since at least March.

Beyond nuclear issues, the officials said the U.S. team at the March Oman meeting also raised concerns about Iranian involvement in Syria, Tehran’s threats to close the strategically important Strait of Hormuz and the status of Robert Levinson, a missing former FBI agent who the U.S. believes was abducted in Iran, as well as two other Americans detained in the country.

Hoping to keep the channel open, Secretary of State John Kerry then visited Oman in May on a trip ostensibly to push a military deal with the sultanate but secretly focused on maintaining that country’s key mediation role, particularly after the Iranian election scheduled for the next month, the officials said.

In fact, though, Kerry’s engagement with Iran went back much further. In fact his diplomacy with Iran dates back to when he was a senator, as the Boston Globe reported:

It was early December 2011 and the US Senate was poised to hold a crucial vote on the nomination of Richard Cordray to head President Obama’s controversial new Consumer Financial Protection Bureau. But John Kerry, the senior senator from Massachusetts, was nowhere to be found. …

It turns out Kerry was on a secret trip to Oman — a trip with an importance that can be appreciated fully only now, following the historic nuclear agreement reached with Iran over the weekend.

Kerry, then chairman of the Senate Foreign Relations Committee, was sequestered in an ornate palace in Muscat, the Omani capital. There, in a delicate meeting with Sultan Qaboos bin Said al Said, the ruler of the desert kingdom who overthrew his father in 1970, Kerry was trying to open a secret dialogue between the United States and Iran.

Kerry’s protest that despite his wish for a nuclear deal with Iran, “We are not blind, and I don’t think we’re stupid…” would hold a lot more water if he (and the administration) hadn’t misread Assad so completely. Kerry’s massive failure with Assad calls into question his judgment about Iran and its intentions.

More importantly, will Kerry’s past experience with Iran convince the Supreme Leader than he can get away with a nuclear weapons program?

I see the problem with ASSad, it is his wife. And for that, I combed the bowels of the Interwebbies and found the correct treatment for Asma.

About those cozy 2009 dinners with the wives:

Where does any Senator or Representative, specifically representing only one state or district in Congress, get any authority whatsoever — self-created-and-serving Congressional foreign relations committee notwithstanding — to purport to represent all the people of the United States in any foreign matters. Let alone in secret. Bunk, that he was doing anything that wasn’t personally, probably financially, serving either himself or Obama.

He was brokering a secret ketchup sale to Iran.