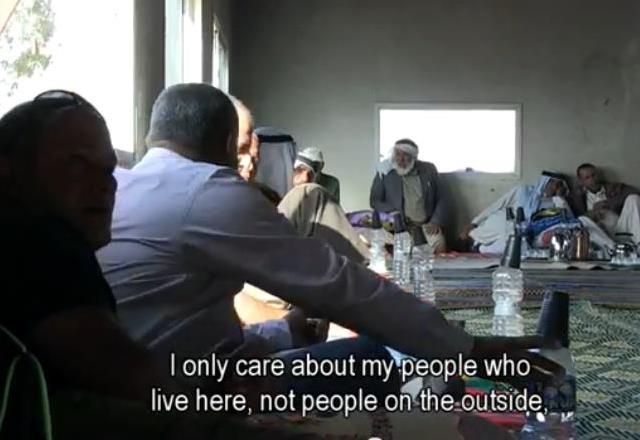 Currently new political attacks against Israel are crystallizing around the Begin plan. Former MK Benny Begin has written legislation to integrate the Bedouin into Israel society. Naturally there’s debate about the merits of the plan. Naturally, those opposed to it cast in light of institutional Israeli racism.

While acknowledging that the Bedouin haven’t always been treated fairly, Shmuel Rosner summarized the plan last week in the New York Times:

But Israel will also have to pay a high price. It will grant Bedouins formal title over some land. It will also spend considerable taxpayer money — about $2 billion for the entire effort, including over $330 million on economic development — to improve their living conditions.

It is in the interest of both the Bedouins and the Israeli government to see this plan implemented. It provides both camps with a rare opportunity to achieve much in a single stroke: to settle the dispute over land ownership in the Negev once and for all while bringing much-needed help to one of the country’s most disfavored groups.

Today, the New York Times bureau chief Jodi Rudoren reported on the controversy, In an Israeli Plan, Bedouins See a Threat to Their Way of Life. While a few elements of the report are fair, the overall slant of the article is reflected in the title. Outside of government officials, no one supporting the plan is interviewed. Unaccountably Rudoren gets a statement from the, EU funded, anti-Israel NGO, Adalah without describing it as such. Rudoren throws around terms like “racism,” “ethnic cleansing,” “apartheid,” “land grab,” and “Native American reservation” – to be sure she’s always quoting someone else – leaving little doubt about the agenda she’s promoting.

The use of these words is gratuitous given what else Rudoren reported. She acknowledged that part of the aim of the Israeli government is to improve the lives of the Bedouin, meaning that even if the plan is imperfect it hardly could be described with “racism,” “ethnic cleansing” or “apartheid.” And the cost to the Israeli government hardly supports the idea of a land grab.

Perhaps nothing better could be expected of a reporter who, a few months ago, romanticized the violent act of rock throwing.

As far as the number of Bedouins who would have to relocate under the Begin plan Rudoren writes:

There remain 35 unrecognized villages like Abdeh, with a total of 70,000 residents, who could face forced relocation.

But according to Rosner, the estimated number of those who would be relocated and receive compensation is much lower. CAMERA, in fact, also notes that in previous news reports, the Israeli government, and activist groups opposed to the plan estimate the number is much less than the number reported by Rudoren.

Nowhere in today’s report does The Times make clear that opponents of the plan and the government, which agree on little else, both acknowledge that relocation would apply to 30,000 to 40,000 Negev Bedouin, and that another 30,000 to 40,000 (depending on which figures you accept) who live in currently unrecognized villages will be permitted to remain in place. (And according to the government, as many as 60,000 out of 90,000 Bedouin living in unrecognized communities — the vast majority — will be able to remain where they are.)

Rudoren likely got her number from an activist without doing the necessary due diligence to assess its veracity.

At the same time, many NGOs involved in the issue have taken a tendentious stance against the government’s Bedouin policy. Their position includes an unequivocal demand to recognize the maximum Bedouin demands and their claims of ownership over the land, without taking into account other factors such as regional master plans and laws on construction and zoning. These groups accuse Israel of pursuing a racist policy, discriminating against “indigenous” Bedouins and favoring Jewish Israelis in the Negev.

It is notable this context that an academic article by Kark, Frantzman, and Yahel demonstrates that the description of Bedouins as “indigenous” is relatively recent and is essentially a political tool in the hands of Bedouins, academics, and NGOs in their allegations regarding Israeli “violations,” while also providing an additional legal route for attacking Israel in international forums such as the UN.2 They also enumerate generally accepted parameters of the term “indigenous,” and explain why the Bedouins cannot be included in this category: the Bedouin are not the original inhabitants of the Negev; they have not resided there “from time immemorial,” as they arrived during the Ottoman rule; the Bedouin “were never sovereign in the area”; and nomadic culture “by definition, precludes permanent attachment to specific territory.” Finally, Bedouins are only considered “indigenous” in Israel, not in other neighboring countries such as Egypt, Jordan, and Saudi Arabia.3

The organizations also deny the Israeli government’s right to apply Israeli law and sovereignty within Israel, using extreme rhetoric and language. The policies proposed by the NGOs, however, would create two different law enforcement systems in the Negev – one for Jewish citizens of Israel and one for Bedouin citizens of Israel.

Rudoren is on the side of the NGO’s such as Adalah who seek to conflate the issue of the Bedouins with the Palestinians. (Rudoren writes, without irony “The plight of the Bedouins has in many circles become a proxy for the broader Arab-Israeli conflict …” even as her own “reporting” seeks to do just that.) NGO Monitor’s observation about the description of Bedouin as “indigenous” is ironic. If the Negev were part of “Palestine” you could be sure no one would be much concerned with the land rights of the Bedouin; least of all the Palestinians, who are currently adopting the Bedouin cause as their own. Rudoren, too, accepts at face value the Bedouin claim that they had been in the Negev since the 7th century.

The government of Israel interviewed two Bedouin Sheikhs who support the Begin plan.

Cooperation between the Israeli government and the Bedouin is emphasized by the sheikhs, as this is the best way to find an equitable resolution that respects Bedouin traditions and culture. However, support for the advancement of the Bedouin in the Negev is not limited to governmental action: in an act of Jewish-Bedouin cooperation, the Yerucham municipality is giving Sheikh A-Zanoon’s village 500 dunams (124 acres) of land.

Strong criticism is also expressed towards “people on the outside,” primarily Israeli Arabs from northern Israel and foreign activists. These outsiders are agitating against the plan, but as Sheikh A-Zanoon says “they lack nothing” while the Bedouin suffer from difficult conditions. These agitators offer no better alternative yet are willing to sacrifice the future of the Bedouin for their own political interests.

Clearly there are Bedouin who do favor the Begin plan, but Rudoren didn’t look for them.

Last year, Elder of Ziyon summed up the movement to support the Bedouin against Israel as:

The upshot is that the romanticizing of the Bedouin, as is often the case, has nothing to do with their legal rights and everything to do with using them as yet more ammunition against Israel.

Rudoren’s emphases, mistakes and omissions show how true Elder of Ziyon’s conclusion is.

Why would anyone refer to Jodi Rudoren as a reporter? She is, in fact, a leftist hack propagandist. The New York Times hasn’t been anything beyond a propaganda rag since Pinch Sulzberger moved Abe Rosenthal aside not long after being given the job by the owning Sulzberger-Ochs families.

Rosenthal was an old-style liberal Democrat (pro-Israel, anti-communist), but during his tenure you could count on what was in the news columns as truthful and verified. Pinch had to start Abe out the door to convert the paper to the pathetic shell of a newspaper it has become.

The results of his tenure have been clear. Back before the real estate bust and Carlos Slim’s bailout money, it was estimated that the physical property of the NYT company – the real estate, equipment, trucks, furniture, etc. – was worth more than the total market capitalization of the company’s stock. Naturally, this made them a target for merger & acquisition firms and in need of a White Knight’s help.

But the point of that valuation was lost on most of us: the property being worth more than the stock meant that the newspaper itself was a negative value, the company was worth more as a holder of property than as a business venture.

The actual numbers may have temporarily changed with the bust and recession and Fed keeping money flowing to Wall Street, but the point echoes still.