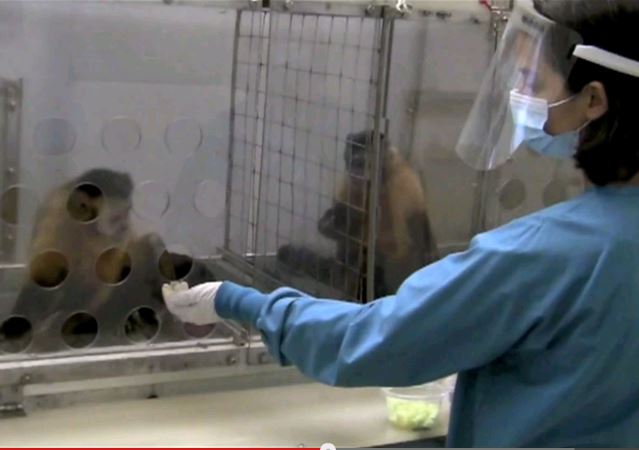 Upworthy is the wildly popular low-information-by-design website which has fine-tuned the ability to turn 2-3 sentence (at most) liberal memes viral.

Often, the meme consists entirely of the title, with some seemingly obvious liberal talking point that is only superficially obvious, but actually cannot withstand scrutiny. Which is why no scrutiny is given in the posts.

You may recall my posts:

Upworthy has turned a section of its website over the the AFL-CIO, presumably for a hefty payment.  The section is called Workonomics.

This post and the video have been around for a while, but just came to my attention, 2 Monkeys Were Paid Unequally; See What Happens Next.  There is no text after that, just a note to watch starting at the 1:34 mark.

Given the Upworthy audience, no more need be said. Monkey which gets paid cucumbers instead of grapes is cheated just like workers who don’t get “equal pay for equal work” right?  So simple.

Well, it’s simple if you think workers are monkeys, and are in cages where they have no choices in life.  Which apparently is what the AFL-CIO thinks.

Maybe monkeys just prefer grapes, and it’s no deeper than that.

It’s a funny video, for sure. But it made the AFL-CIO look like the monkey.

For those who have never raised chickens, they have never had the rare opportunity to watch what I call “chicken football”.

If you throw scraps to the chickens, it simply does not matter who gets what, or how delightful their particular morsel is. All the chickens will reliably drop what they have, and go after what they perceive the “top chicken” has. This will continue, with chickens in turn pursuing and robbing the scrap of food from their fellows. It is both hilarious and instructive to watch.

Conversely, my Golden (who is really a fine gentleman) would not eat until his Shar-pei buddy began to eat. He would never eat the buddy’s food, though the Shar-pei would eat his, given the chance.

My LGD, Molly, would allow her milk goat charges to eat her dog food, and would stoically go over and eat their goat mix.

Idiots like that “professor” give applied psychology a bad name.

My dog and cat exhibit the same behavior. My cat prefers the fresher offering, even by several seconds. My dog is insanely jealous and will crowd out the cat. When sufficiently satiated, they are both model citizens.

I hope the veterinary phase of ObamaCare will cover Molly’s sex-change operation, Rags.

You replace those monkees with a couple of honey badgers, and that lab assistant’s fingers will be the treat faster than you can sing “I’m Not Your Steppin’ Stone!”

I ain’t an anthropomorphysicist, but seeing monkeys fling their poop gives me insight into the human crew who run Upworthy.

AFL-CIO baboons will take candy from their own mouths and throw it at you if you cross a picket line.

In the second video – the monkey union rep coordinates a feces throwing session!

Therefore… Everyone should have a beachfront property in Hawaii, and they were at each other’s throats in 3, 2, 1… The Romans used to enjoy this kind of sport.

y’know… that video actually indirectly has another meaning… it goes to show you how liberals waste money on programs that don’t benefit anybody.

…when you do that too much like what the democrat party does… you get: Detroit.

Let’s give all the monkeys grapes, which are more expensive. Everybody is happy.

Till the high priced grapes bankrupt the lab.

What do the monkeys get, then?

So the message is…..

AFL-CIO, Dems and Obama want to make MONKEYS of us all????

The video purports to support the idea of “equal pay for equal work”, but what unions like the AFL-CIO really want is “equal pay for UNequal work”: The laziest and most incompetent workers should be paid the same as the best workers, and nobody should ever be fired for doing a bad job. Unions today are, first and foremost, a protection racket for layabouts, idiots, and thieves.

I have no problem with equal pay for equal work. But, not all work is equal. Hence not all pay should be equal.

Let’s see a video with one monkey having to do twice the work for the same pay and see how that works out. And that doesn’t compare to the real life situation where some have greater training and skills than others hence receive greater pay.

So, all monkeys should get cucumbers.

End of problem, so long as we can prevent some serpent in the garden from screwing things up by giving one monkey some of those damn grapes.

I have had the discussion on this video more than once. The point I like to make is that the corollary is the more important point.

When one monkey does the work and has half his grapes given to the monkey that won’t work, the working money will be incentivized to either get on the dole like his co-non-worker, or to go Galt and move to a right to work cage.

“Equal pay” (free stuff) to someone who games the system can make the general populace as irate as that angry monkey. Even worse, when wealthy DC polits that never had a real job in their life, scam the general public for billions for their conniving connected friends, we will soon start to throw things.

And when a president consistently steals, lies and cheats, and the top cop helps him … while the IRS abuses the conservative taxpayer … the poop will really hit the fan.

Obama isn’t about equality … for one thing, he came out of a racist church where the white man world is devilish. But the Chicago Way is that no one gets ahead (gets grapes) without bowing to his syndicate, and paying the proper bag men (union bosses, political campaigns, etc). Obama can’t get through a single speech without throwing his hateful pooh at conservative working “capitalists”. I don’t think we’ve ever had a president go so tribal.

Both monkeys have also been “pre-trained” with cuccumbers and grapes because the monkey on the left clearly knows what a grape is and is actively searching for a possibly fallen grape when his neighbor gets one.

Let’s set aside the serious limitations that the professor brought up (that are obvious and pertinent). Even assuming the study has human applicability, this is more analogous to an unskilled laborer with little responsibility and choice taking a “pay cut” while his identical peer does not. It’s also kind of “duh!” and a waste of money unless you look at the brain chemistry or something deeper than a well-known animal observation.

As a science geek I can tell you this is worthless unless they can establish that the animals tested considered the chore performed to be ‘work’ as humans think of it, and the grapes/cucumbers that followed as a reward for the specific ‘work’ they performed, ‘pay’ as humans recognize the term and concept. To assign such conceptual understandings (work/pay) to monkeys without evidence that they actually hold them is anthropomorphic – attributing human thoughts/behaviors where no evidence exists to support it.

Until they can do that, I can anthropomorphize, as they are doing, that the monkey rejecting the cucumber is doing so out of altruism, you see, that in actuality the cucumber is the more cherished and he’d love to have it, but the monkey altruistically insists on the less cherished grape so that unknown, perhaps more needy other monkeys may enjoy the cucumbers he does not deserve. This is bullshit, of course, but it assigns the same capacity for human thought/concepts – and presents the same amount of evidence for it – as does this group’s contention that it is about refusing ‘unequal pay’.

Nor does it profess to claim that refusal of unequal pay is an automatic reaction, a survival instinct, as opposed to a well considered and reasoned out thought/behavior based on moral values of fairness.

There are any numbers of reasons an animal may refuse a reward in favor of another. This video doesn’t show they’ve ruled them all out and I’ll bet $5 the test protocols don’t either.

As a psychologist I am deeply embarrassed by my own field.

a lot of the union jobs today could be done by monkeys for merely the grape pay, instead of having to listen to the never-ending whinings of the $28/hr UAW worker who expects the company to pay another $28/hr union worker to peel his grapes for him