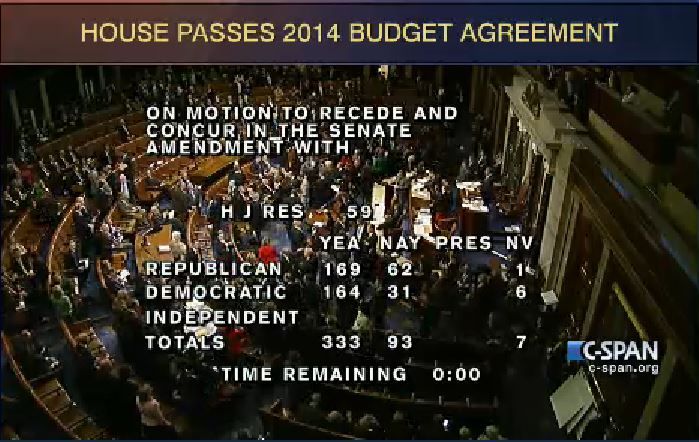 The House is expected to vote soon on the budget deal. You can watch live on C-SPAN.

(Note: C-SPAN screen capture of final vote above has a discrepancy of one vote for some reason)

I’ll be interested to hear more on the theory that the reason for all the haste is that Repubs need to cave on the budget quickly so there will be enough time left to thoroughly cave on illegals.

I guess we’ll fight the next next time.

I see a hill to die on the distance. The graves are already dug.

Hey this whole budget thing is just going to implode. Maybe we should just sit back and watch it implode.

Our nation is in the ICU and the GOP can’t stab us in the back fast enough.

“Our nation is in the ICU and the GOP can’t stab us in the back fast enough.”

They didn’t even bother to move behind us before they started stabbing. It was more like a frontal assault with a bazooka.

Ross Kaminsky makes some pretty good points in A Bad Deal Compared to What?

So for those of you who are saying “this deal is too terrible to support” I would ask you: “compared to what?”

What better deal for Republicans do you think would have any chance of passing both houses of Congress and being signed by our Alinskyite president whose first thought is never “what is best for America?” but rather “how can I destroy my enemies?”

I can live with this “deal”. To engage in the spectacle of another government shutdown at this time would just give the media an excuse to change their focus from the democrats committing suicide over Obamacare.

This proves without a doubt that the GOP, like a tumor, needs to be destroyed. It’s hopeless corrupt, and infested with rino fleas. Burn the carcass, and start over with the Tea Party.

Starve the GOP of your money and your vote, placing both to the Tea Party, where they will effect change.

The democrat party has its legions of useful idiots. Apparently, so does the GOP. Don’t be one.

I left the GOP in ’92 when Lee Atwater announced that the GOP “tent” was big enough to let in baby killers.

Ross Kaminsky, as mentioned by snopercod, and Yuval Levin at NRO, who does an analysis of the details, defend the deal.

Sequester was doomed from the shutdown. If you wanted a CR with sequester, Boehner proposed that in September. But Cruz and his easily amused followers pushed their insanely futile “defund” movement to force a shutdown to make them feel better.

We had to take the short term deal. And the only way to get a better deal than Ryan did was to go to sleep and dream nice thoughts.

Don’t like it? Blame Cruz, and yourself if you supported that nonsense.

I hope the Professor is paying you well to be the resident contrary spokes-mouth. You are fairly predictable, however, and thus are boring after a few comments.

Estragon has been around for a long time. . Sometimes I agree & sometimes I don’t .

Why are you called platypus ?

The Republican party has demonstrated by voice and vote that they are a party that grows, then funds tyrannical government, increases oppressive taxation, debases the currency and opposes constitutional conservatives.

You know a bill is garbage when Democrats are voting in favor of it.

And RINOs defend it by essentially saying ’tis better to appease and lose than fight and lose.

We are supposed to believe that the Democrats let go of the possibility of a distracting, 2014-saving government shutdown for $25-30 billion in extra spending. This is the pitch from the GOP and supporters. This is why the GOP and supporters keep losing and losing and losing to Democrats. And if all the losing weren’t enough, now they are trying to cast off their conservative base.

It used to be the thinking that conservatives had no where else to go, so f**k ’em, they’ll vote GOP when the time comes. Then 2012 happened. The GOP learned nothing and is setting up the next loss, which doesn’t even require amnesty but they’ll likely toss that on the bonfire at their feet just to make sure they lose.

“Establishmentism” is VERY imbedded in Wash. Even Lt. Alan West did some dodgy voting and he’s considered 100% TEA party.

Sure seems time for revolution. There are, what about 500+ stodgies in Wash – an oligarchy – telling 300 million what to do as they CONTINUE pillaging the treasury.

We can complain online… Won’t solve anything