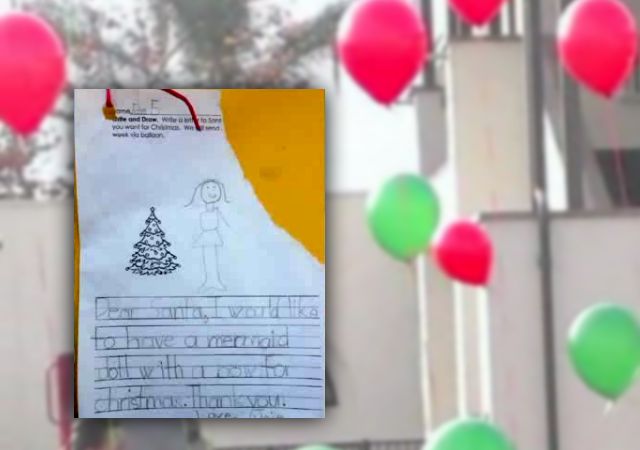 This story has started making the rounds the last day or two, and I thought it would make a nice feel-good story to share with LI readers.  Be sure to watch the video after the jump for the full story.

A little girl’s Christmas wish will be answered after a red balloon carrying her letter to Santa floated its way through the sky to a good samaritan with an interesting connection to the girl’s first name.

A kindergarten class sent Santa their Christmas wish lists, but one letter didn’t make it to the North Pole. Instead, a man working in downtown San Diego stumbled upon it as it literally fell out of the sky.

Terry Hardin was on his way home Tuesday when he spotted a red balloon with a half-torn letter attached slowly descending towards him. Hardin had no clue where the balloon came from, but after reading the note attached to it, he knew he had to find out.

“It was from some young lady, a 5-year-old named Joie,” Hardin said.

The note read: “Dear Santa, I would like to have a mermaid doll with a bow for Christmas. Thank you, Love Joie.”

Hardin turned to Facebook and with a little help, he was able to track the little girl to Mrs. Garay’s kindergarten class at St. Rose of Lima School in Chula Vista.

(No, I’m not going to go into a social media safety discussion because this is a story with a nice ending and I think I’ll just leave it that way).

It turns out that the class of 23 students had written letters to Santa and attached them to red and green balloons, then released the letters into the sky.  Joie’s was the only balloon that was having a little bit of trouble taking off, so her teacher ripped off a corner of the letter to make it lighter.  Up it finally went into the sky.

And it floated miles away into the hands of Terry Hardin.

It would seem that fate may have had some sort of hand in all this.  Hardin says his mother, who passed away just over a year ago, shared the same name with the same spelling, Joie.

Hardin has decided to play Santa’s helper and grant Joie her wish; he’ll deliver a mermaid doll to Joie, according to FOX 5 San Diego.  As for all the other letters that were released into the sky that day, Santa told the class he received them and is excited to get busy with their lists.

Great story, Mandy. Thank you for leaving it as is.

Beautiful! Brought me back to watching the French short “The Red Balloon” back in elementary school.

Thanks to a liberal legislator and a democratic party controlled house and senate in New Hampshire this type of action is subject to a heavy fine. It is what we sarcastically refer to the “Escaped Balloon Law”.

When the German Protestants took Santa over from the Orthodox creed they added a work ethic. ( busy elves) .

The idea of kids needing to earn a present by at least being good was a given for orthodox & trad Protestant . I don’t care how old they are ( 3 year olds can compute bad= no Santa ) I ask just what they have done or intend to do to deserve a present.

It always gets them thinking . You can see the little cogs getting into gear in their heads .

Being California I doubt miss Joie has ever heard stuff like that . She has learnt to just send a request off into the sir .& some soppy adult will go googah.