George Zimmerman sells painting for $100k, gets guns and girlfriend back

George Zimmerman sells painting for $100k, gets guns and girlfriend back 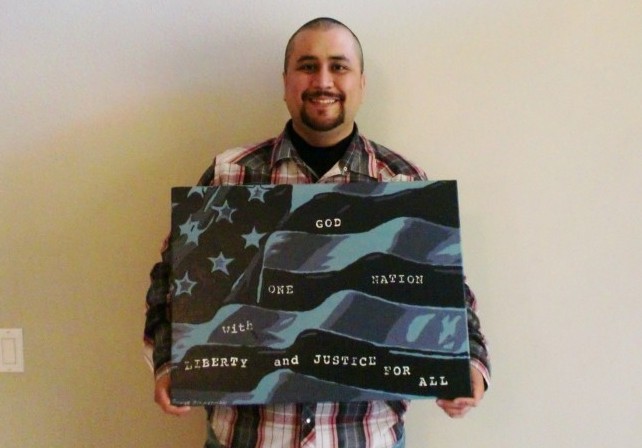 These are good days for George Zimmerman. He’s selling art for big bucks, he got his guns back, and …, um, well, he’s back with Samantha Sheibe.

Becca Lower brings us all this news which may portend more blog posts here in the future.

From the L.A. Times:

How much is a painting created by George Zimmerman worth?

The user’s prize: A signed 18-inch-by-24-inch oil painting of a blue American flag featuring a part of the Pledge of Allegiance, which had a starting bid of $0.99.

The identity of the buyer is unknown, but according to the listing, the winning auction bid was one of 96 by 24 users when bidding closed at 9:55 a.m. Saturday.

Using the EBay account “therealgeorgez,” Zimmerman, 30, put his artwork up for auction early this week.

“Everyone has been asking what I have been doing with myself,” the listing reads. “I found a creative way to express myself, my emotions and the symbols that represent my experiences. My art work allows me to reflect, providing a therapeutic outlet and allows me to remain indoors :-)”

Zimmerman, 30, whose arsenal was confiscated in November following a domestic dispute with his girlfriend, picked up his four firearms, including a shotgun and an assault rifle from the Seminole County Sheriff’s Office in Sanford, Fla., this week.

He was eligible to retrieve the weapons since Dec. 11 when assault charges against him were dismissed.

Zimmerman, perhaps Florida’s most notorious gun owner, picked up the weapons on Tuesday and Wednesday and returned to the sheriff’s office on Thursday with girlfriend Samantha Scheibe, 27, because she also had to retrieve a handgun police seized during the same incident in November.

Returned to Zimmerman were an Interarms .380-caliber handgun, a Glock 19 handgun, a Kel-Tec 12-gauge shotgun and an AR-15 assault rifle.

Will George Z. always live with the virtual mark of Cain on his forehead?

Quite likely. But it’s worth remembering that commanding officers have identifying marks/emblems on their uniforms, arguably so the troops know who to follow.

Creating art is a good outlet for emotions and apparently a good inlet for income. And then there is music…

Except, of course, if it is rap music.

Lose the girl. Get your divorce over, some counseling, and leave Florida. Chill.

yup.
she is poison.

Personally, my feeling is you can ALWAYS afford a really good woman. After all…they are priceless!

And hard to find.

The girl will behave. She has the Sword of Damocles hanging over her. If she calls 911 again, she better look like she just left an MMA cage fight.

Zimmerman’s encounter with ‘Obama’s proxy son’ might certainly be called life changing, but is he stuck on stupid?

Why tie himself to the disgruntled woman? She’s ugly and mean; who needs that in their life?

George Zimmerman has his moments of heroism, such as helping the woman whose home was invaded get better locks installed and helping the family in the serious wreck get out of their vehicles.

But he has very bad taste in women and presidential candidates/parties.

Anyone who would/could support Barack Obama and go back to a girlfriend who called the cops on him and with her mother, was shopping for a media interview, has reason/logic/cognitive problems, moral and spiritual blindness.

Oh my god people – an AR-15 is NOT A FREAKING ASSAULT RIFLE.

It is a SEMI-AUTOMATIC rifle.

Every time any member of the press refers to it as an ‘assault rifle’, they need to be bombarded by people that actually know what the hell they are talking about.

Snake oil salesmen did not go around telling suckers what was really inside the bottle. They said what the ignorant suckers wanted to hear, right?

I said a long time ago that Eric Holder will never return to Zimmerman his gun(s) now in DOJ’s possession. Holder will falsely pretend he is continuing to investigate whether the Martin shooting was racially motivated for as long as he heads the DOJ. That “investigation” will remain open until Holder and/or Obama leave office. Zimmerman may get his gun(s) back from the DOJ if a Republicans wins the presidency in 2016, but I would not be surprised at all if the gun(s) conveniently get lost in the bureaucracy.

I’m not surprised a county sheriff did the right thing and gave Zimmerman his guns back. I’ll truly be shocked if Eric Holder’s Dept. of Justice ever does.

You may bery well be right. But …

What if GZ sues? What are his damages? Based on what he got for his painting, a strong argument can be made that each weapon Holder has is worth about $250,000.

Holder squirming under the white hot spotlight? Talk about pay-per-view.

Holder won’t pay we will. If so I say dock his pension.

Better yet get yourself an RK-9000. It’ll go for $80 if you time your buy right, and unless you use it to smash glass tabletops, will last you at least ten years.

It’s one 9mm of mediocre quality. Better to buy another one than fight that fight by yourself.

I don’t think he would ever sell it. Think about it: It’s one thing to sell his artwork; it’s quite another to go auction off that firearm and all of its negative connotations. I’m sure he would rather not get that media spotlight again.

If the painting went for 110K, I cannot imagine how much THAT gun could bring in.
I would give it a try.

Mediocre? His PF-9 killed his attacker just as dead as my $1200 Kimber Pro Aegis II would have…. and without any failure to extract issues. Every Kel-Tec I’ve owned went bang on target, flawlessly, every time I’ve used them.

It’s not designed to fire thousands of rounds a week end for years on end, it’s designed as a self defense weapon with an occasional trip to the range.

He needs to get rid of that woman. She is seriously bad news. SMH

I’m hoping that George is just humoring the girl until he can make a clean break.

Well, he did support Obama, so I seriously doubt he is smart enough to do that.

Wonder if he knows about this site? That’d be a kick.

JackRussellTerrierist in reply to MouseTheLuckyDog. | December 24, 2013 at 1:14 am

That was my thought. Wait until the spotlight dims on the entire incident, then ease her out and leave the state.

George, you need to lose chicks for a while. You really think this girl you hooked up with again isn’t going to go after you again?

Where’s DriveLie to tell us all the ways this post is wrong?

What someone ‘bids’ on Ebay vs ‘what money someone actually comes up with and pays for an item’ are two different things.

MOM did a fine job when all was said and done, but $2.5M seems a little steep.

Easy for you to say, unless it was your buttocks in the Florida courtroom chair. Okay I’ll just say it – YMMV, and it obviously does.

GZ must think MOM was worth it otherwise he’d head into bankruptcy court and make it go away. Of course, there is still plenty of time to make the real tortfeasors pay. That would be those who conspired to annihilate GZ using public slander so that they could snake a few million out of the homeowners association. You really don’t think that “settlement” is binding if it was based on false facts, do you?

The GZ saga is far from over, which is why the LSM keeps trying to distract us with shiny objects designed to make GZ look bad. Heck, it almost worked the first time.

[…] Welcome, Legal Insurrection readers! And thank you for the kind words, Professor […]