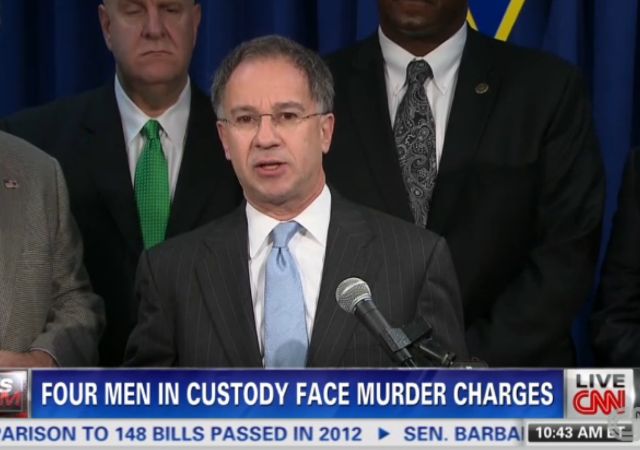 Authorities announced today that four men have been arrested and charged in connection with a carjacking outside an upscale NJ mall last Sunday that left one victim dead.

From the Star Ledger / NJ.com:

Nearly a week after 30-year-old Hoboken lawyer Dustin Friedland was gunned down in a deadly carjacking while returning to his vehicle in an upper level parking deck of the Mall at Short Hills, police this morning arrested four men on charges of murder.

The four, were identified as Karif Ford, 31, Basim Henry, 32, Kevin Roberts, 35, all of Newark, and Hanif Thompson, 29, of Irvington. All were being held at the Essex County Correctional Facility on $2 million bail each.

Thompson was taken into custody at his home in Irvington. Ford and Roberts were arrested in Newark. Henry was arrested, by an FBI task force, at a hotel in Easton, Pa., said Anthony Ambrose, chief of detectives for the Essex County Prosecutor’s Office. He said the arrests began around 9 p.m. Friday and concluded at about 3 a.m. today.

Friedland and his wife, Jamie, had returned to their parked 2012 silver Range Rover after an evening of holiday shopping on December 15th.  Friedland had opened the car door for his wife and was said to have been walking behind the vehicle to the other side when he was confronted by several of the alleged carjackers.  After reportedly getting into a scuffle with one of them, Friedland was shot once in the head and later died in a Morristown, NJ hospital.

The stolen Range Rover was found the following morning in Newark, NJ.  Acting Essex County Prosecutor Carolyn Murray said in a press conference today that the crime is believed to have been motivated by the vehicle, according to the Star Ledger.

The state of NJ has been battling carjacking crimes in Essex County.  Earlier this summer, a joint NJ state and federal task force launched an anti-carjacking public awareness campaign, aimed in part at warning would-be carjackers of serious consequences for related offenses.

One friend in New Jersey told me it was going to hard to catch these guys since the only description given was males in their 20s wearing blue jeans and dark jackets, two had Yankees hats. Boy, that narrows it down in north Jersey, doesn’t it?

But he added that whenever the news media omits the race of the suspect up there, you know what it is.

Saw a picture of one of the perps. Clearly a black on white crime. Oh wait, that’s racist.

Like the ‘knockout’ game, the one way to combat carjacking like this is very, very long prison sentences for all the perps. The community will eventually get the message.

In my misspent youth I worked as a classification officer at a large corrections facility.

Prison is not a deterrent to this sub culture. What needs to change is the culture itself. Everything…. gangsta rap, irresponsible parenthood, victim mindset, hate whitey….. all of it.

Until the underlying culture is changed, crimes like this will happen, prison or not.

I can’t argue against that since I agree that the culture must change.

There actually is another way. And all you have to do is point and click. 🙂

Wow those strict gun laws really work, not. If it were easier for the regular folks to canceal carry there might be fewer carjackings.

My stars, I see what you mean. Why, all four of them are black!! This is shocking, so very hard to believe.

The Range Rover gets a lot of play in the later gangster thug era of hip hop.

Kevin Rudolph – I Made It
Nelly – Country Grammar
Nelly – Ride With Me
T.I. – Got Your Back
T.I. – Yeah Ya Know
Usher – Guilty
Notorious BIG – I Love The Dough
Jay Z – Is that yo Chick
Jay Z/Beyonce – Crazy in Love
R-Kelly – Fiesta
Jay Z – Imaginary Player

Tell us again why a legal execution is barbaric.

They wanted the car, so they took it. Somebody got in the way? They killed him. These animals show no respect for human life, property or civility.

They are a burden to society, and they will continue to be, for now we have to feed them, maintain a roof over their heads and provide medical attention.

Please, please speed up the trial, and please, please give them an appointment with Old Sparky, the sooner the better. We don’t need this trash in our streets nor in prison.

“They are a burden to society, and they will continue to be, for now we have to feed them, maintain a roof over their heads and provide medical attention.

Really? I mean, do we really have to keep feeding, clothing, housing, paying their power bills, giving them phones, clothing, toys, etc.? All that needs to happen is for a few laws to be tweaked here and there to stop the handouts, and evolution will quickly take its course.

Just think for a minute about, oh, say about a 75% cut in law enforcement, justice system and prison costs. And that’s after we bankroll the abolished welfare expenditures.

When society does not have adequate deterrants, like Capital Punishment, murders and assaults increase.

These perps should hang/fry/get lethal injections.

Recidivism on assault/theft should get double sentences.

News would then get around the hoodz and such crimes would radically decrease.

Oh, and bring back work/chain gangs. Let them do their own cooking and cleaning and do work to support their room and board.

No sex change surgery or votes for prisoners or convicted felons.

Cut off the nuts of all of them and make them wear women’s clothing. For ever.

One thing that the media has been kinda quiet about is the previous arrest records of these 4…. garanteed they have long arrest records…