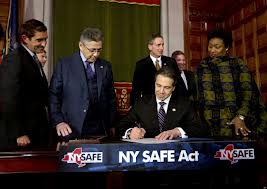 Federal District Court Judge William M. Skretny has found that most provisions of NY’s SAFE Act–passed only one month after the Sandy Hook elementary school shooting–do not infringe the Second Amendment.

He did, however, find that the provision that limits magazine capacity to only seven rounds was unconstitutional under the Second Amendment.

Almost no semi-automatic pistols have 7-round magazines available.  Because semi-automatic pistols are the overwhelming preference for civilian self-defense–as well as for police and military use–the 7-round limit would have effectively banned the large majority of semi-automatic pistols on the market.  (Technically, one could use a large capacity magazine and only load it to 7-rounds; if, that is, one were willing to risk a felony conviction based on a police officer’s honest ability to accurately count to seven. Not me, thanks.)

Ironically, one of the few semi-automatic pistols for which 7-round magazines are readily available is the model 1911, which most folks not familiar with guns will know as the Colt .45 pistol of WWII fame.  Thus, this relatively lethal handgun firing the potent .45 ACP cartridge would have been granted preference over many handguns of lesser lethality.

Thus the tossing of the 7-round limit saves for law-abiding citizens the vast majority of contemporary handguns for their self-defense use.

Unfortunately, the remainder of the SAFE Acts egregious restrictions on the 2nd Amendment rights of law-abiding citizens were allowed to stand, including severe restrictions on so-called “assault weapons,” mandatory registration which can only serve the purpose of future confiscation  of firearms possessed by law-abiding citizens (because criminals do not register their guns or otherwise obey gun laws), and so forth.

The full-length judicial opinion from Judge Skretny is available below.

Happy New Year, Paisan. And to ALL at Legal Insurrection.

‘Cuse me, I have a martini to shake. “Shaken, not stirred”!

I was wondering whether whether that attack on 7 round mags would work, and apparently it does. Note though that 8 seems to becoming std for 1911 type .45 ACP semi automatics. Still, your point is quite valid that it is quite hard to find 7 round mags for smaller calibers.

They had to amend the law specifically because of this. Most manufacturers make 10-round magazines for their “high-capacity” (read: standard 11-18 round) pistols to comply with state laws, but to my knowledge none of them make 7-round magazines unless the gun design demands it (single-stack .45s like the 1911, pocket pistols that only hold 6-7 due to size, etc.). They realized this severe-and-arbitrary limit on what firearms are legal would be overturned in court, so they expanded it to make up-to-10-round magazines legal as long as they aren’t loaded with more than 7.

The “new” standard for 1911-style magazines (8 rounds) was legal, as long as it only was loaded with 7 or less. In theory, you could still carry the gun with 8 rounds (7 in the magazine, one in the chamber), but if a cop suspected you loaded 8 and racked the slide – as opposed to loading 7, racking the slide, ejecting the magazine, loading another round to make 7, and re-inserting the magazine – you’d have trouble.

And given that process to get the extra round, what cop wouldn’t suspect you’d take a shortcut by loading 8? And again, that’s the theory – how they’d enforce it in practice is another matter entirely.

Wonder what happens to all those folks who’ve already been charged for having that 8th round?

Constitutionally, the court effectively found that the magazine limit should never have been a law and violating it should never have been a crime, so as I understand it (IANAL) the powers-that-be are required to release them, wipe their records (including removing them from any “prohibited person” lists), and probably compensate them for time served and/or fines paid. And return any firearms/accessories seized (or compensate for fair-market-value if they’ve been sold/destroyed).

That said, this IS New York, and we ARE talking about so-called “gun criminals,” so any/all of these will likely require more lawsuits.

Each salvaged piece our constitutionally guaranteed rights is a good thing, but I have no desire to ever visit such an oppressive state.

NY courts pretty much let the legislature do what it wants no matter how egregious. This is no different. You should see some of the crazy tax rulings they come up with.

Why is a 10-round limit any more reasonable?

In my opinion (as stated above, IANAL), the 10-round limit has been in place long enough, in enough other areas, and with enough compliance by manufacturers (who make 10-round magazines for pistols with standard capacities of 11-18 rounds) that 10 rounds is not an infringement.

Philosophically, I’m with you. If the NY police can – and indeed, are required to – carry 16-round magazines in their sidearms and 30-round magazines in their “patrol rifles” (“assault weapons” if you or I own one), and the firearm in question was designed* to take that capacity magazine, then you or I should have that same right. Court precedent says otherwise, however.

—
* – Case in point: It doesn’t matter if the manufacturer makes a 10-round magazine – increased capacity is a goal in the design of ANY full-size double-stack pistol. Think about it: Why would Glock, for example, make a pistol with a grip too large/wide for some shooters if they weren’t going to cram it with as many rounds as will fit?

Actually, aren’t most of the police actually carrying select fire AR-15 type “assault rifles” these days, often surplus military weapons, and not the semi-automatic variants that most everyone else can carry?

What some police departments are getting are M16s, but these are almost always relegated to SWAT teams.

Never fear, though. You local po-lice can still get surplus Humvees, Strykers and whatever armored vehicles the Department of Just Us throws out there for the newly militarized po-lice to scarf up.

Yep… First, there was the War on Drugs that required better weapons and tactics. Next up, was the GWOT, with even more tactical and military stuff flowing out to Your Local Police. Now, it seems that you and I are the future enemies of The State. And for that, it would seem, the coppers need to look, act and fight like the military.

IANAL, but horsesh*t. That’s my non legal opinion of the judge’s rambling.

Wasn’t there also a procedural challenge to how the law was passed? IIRC, legislators are required to give at least 48 hours between introducing legislation and voting on it, but the NY SAFE Act was introduced and voted on in a single overnight session (literally, “rammed through in the dead of night”). I don’t think HOW it was passed is necessarily as important as THAT it was passed, but I’d like to know what happened with that, if possible.

It is my understanding that LEOs are exempt from full-auto Federal regulations, even for personal firearms, much less issued firearms.

It looks like there are a few other aspects of the law – besides the 7-round limit – that were stricken:
– The “and if” clause, which if I’m reading this correctly would re-instate the “grandfathering clause” for magazines manufactured before 9/13/1994, and remove the prohibition on transferring them (by removing the language that they must be possessed before the SAFE Act was passed).
– Any references to “muzzle breaks,” which is a meaningless term, but this seems to leave “muzzle brakes” unregulated.
– Pistols that are “versions” of fully-automatic firearms, which may or may not actually mean anything (although it may be relevant to the Glock 19, for example, being thought to be a semi-auto “version” of the full-auto Glock 18; it’s likely more relevant to “AR-15 pistols”).

Any word on a possible appeal on the rest?

“Any word on a possible appeal on the rest?”

Not yet, I’ll keep my ears open.

I do like to point out, here and there, that Heller makes the licensing of journalists constitutionally permissible. And presumably any long-standing restrictions on the practice of journalism.

journalist are pretty much licensed by the state now by having to obtain government issued press credentials to effectively do their job.

Well, the Second is the ONLY place you find the phrase “shall not be infringed.”

And yeah, I’ll echo IANL, just that it is my opinion.

Don’t forget about Connecticut. Yesterday was the last day gun owners had to register their weapons. Next step will eventually be confiscation if there is another mass murder which the liberals are all praying for.

Scary as all hell and this is what obama and his Socialist regime are after. Registration/Confiscation.

The Syracuse DA now says that the ruling doesn’t affect him because he is in another Federal Court District. Looks like more court action is needed.