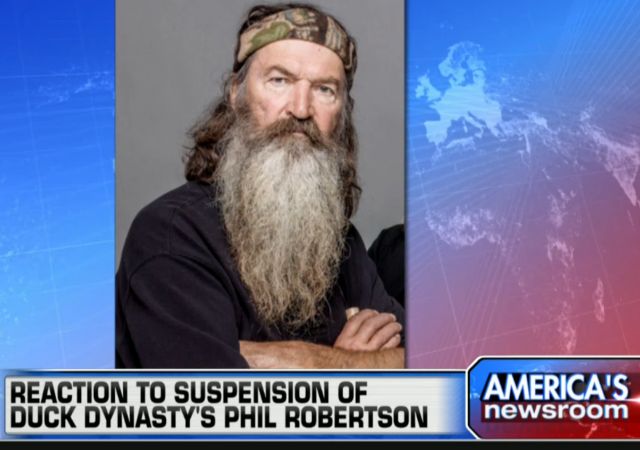 “You flat out told us we were wrong,” the company said of the public’s response to that previous decision.

When we made the decision to remove and evaluate certain Duck Dynasty items, we offended many of our loyal customers. Our intent was to avoid offending, but that’s just what we’ve done.

You told us we made a mistake. And, you weren’t shy about it. You wrote, you called and you took to social media to express your thoughts and feelings. You flat out told us we were wrong.

Today, we are putting all our Duck Dynasty products back in our stores.

And, we apologize for offending you.

We respect all individuals right to express their beliefs. We certainly did not mean to have anyone think different.

We sincerely hope you will continue to be part of our Cracker Barrel family.

In its previous statement, Cracker Barrel said it would “continue to offer Duck Commander products in our stores,” but it indicated that it had “removed selected products which we were concerned might offend some of our guests while we evaluate the situation.”

I cannot believe that you did not anticipate that your core customer group would be offended by this move. So, here is a humble suggestion: Try visiting your restaurants and see who is eating there!

The Duck Dynasty line is owned by A&E. Y’all pressured CB into abandoning their rejection of A&E, and go back to sending them money. Way to go!

Phil Robertson’s line was Duck Commander They hadn’t dropped that.

Made cowardly decision then cowardly backtrack. Would have done nothing if not forced to by outcry. They are not your friends or allies.

Whichever gay-sympathizer executive made the original decision to bend over (if I may turn a phrase) for the GLBT noisemakers needs to be fired.

DC is the most watched show on cable ever, they say. It makes many millions of $$$.

Anyone who thinks A&E is going to walk away from that over ‘principle’ raise your hand.

Anyone who thinks the Robertson family WON’T walk away over principle, raise your hand.

OK, you in the back with your hand up – question ? Yes, you may be excused if you want to go to the bathroom.

A columnist at Forbes nailed it. She called Cracker Barrel’s moves a clusterduck.

It looks like Cracker Barrel has its own eggs on its face while ducking from a huge pushback from the customers who, partially for the nostalgia, come to their restaurant/store (and also have sex… home-style).

I have to use these puns because of the expiration dates on them.

Oh Sally, get thee to a Punnery!

Thanks for the chuckles!

All this brouhaha from our dodo-bird media made me think of this from earlier in this year.

“NBC To Finish 5th In Sweeps For First Time; Network Falls Behind Univision”

OMG ! I done think I found the guy at A&E that tried to boot Phil Robinson from the show !

“The Fluffer” revolved around the destructive relationship between Gurney’s character and a gay college student — played by Michael Cunio — employed to keep Gurney aroused on set during filming.

Shortly thereafter Mr.Sheen demanded another toke on his crack pipe and directed a well paid ‘Ho to service him.

You need to see it NeoCon, it’s Heavenly!

Duck gear will become the wearable merchandise of dissent, and people will wear it with pride because it now makes a statement that is socially acceptable and loud, clear. And mainstream.

Cracker Barrel climbdown is a huge victory over the Gay lobby and their power of intimidation, and probably one of the last such efforts of businesses to be politically correct that we will ever see.

The spell of pandering to thuggish bigots has been broken, people are no longer afraid and it’s now cool to be a dissenter.

It also goes a long way towards freeing gay people from the hateful activists/extortionists that hijacked their cause.

And it will have wider effects too, the PC brigade has lost it’s first skirmish in their upcoming Waterloo, the fear has gone, the way to win has been demonstrated, and many other victories will follow from that.

This is the equivalent of the East German wall coming down, after the first few bricks went, the duck was cooked.

RE: “It also goes a long way towards freeing gay people from the hateful activists/extortionists that hijacked their cause.”