Bloomberg’s anti-gun money fails to get results in Congress

Bloomberg’s anti-gun money fails to get results in Congress 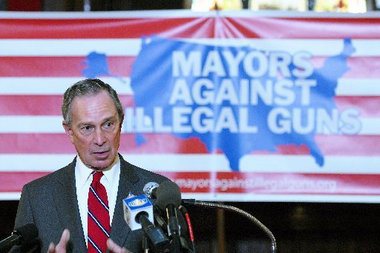 According to the left-leaning Sunlight Foundation, “Thanks in part to outgoing New York Mayor Michael Bloomberg, gun control groups could match or outspend gun rights forces in 2013 electoral contests, and are heading into 2014 with formidable campaign war chests.”

It was Bloomberg, via his “Mayors against Illegal Guns,” who has injected millions of dollars into electing anti-Second Amendment candidates.

But while Bloomberg’s spending has netted some wins (Cory Booker and Jesse Jackson Jr.’s replacement, to name two), Advertising Age has a front-page piece today detailing the dismal return-on-investment for the largely Bloomberg-funded anti-Second Amendment advertising spend over the past year.

Here’s one of their ads running this week on cable:

Advertising Age references Kantar Media’s Campaign Media Analysis Group, self-described as “the exclusive source of buy, spend, and content analysis for political, public affairs and issue advocacy advertising,” which predicted that anti-Second Amendment groups ought to hold a 7:1 advantage over advocates for their opponents.

That’s because over the past year, these groups have spend $14.1 million on TV advertising vs. $1.9 million spent by other groups to defend the Second Amendment via the same medium:

“The return on the investment has been very weak,” said Elizabeth Wilner of Kantar Media. “When you are doing advocacy advertising you are looking for Congress to pass something.”

And things weren’t that much better on the state level. The New York Times reported that about 1,500 gun-related bills had been introduced in state legislatures since the Newtown tragedy and 109 of them became law. Nearly two-thirds of the new laws actually ease restrictions and expand the rights of gun owners, according to the Times. Most of those bills were approved in states controlled by Republicans.

A somewhat sobering lesson, though it benefits in the short-term our right to possess arms  —  spend your $$ in the Capitol City, not on influencing the masses via advertising.

Electing Corey Booger and JJJJJr.’s replacement probably would’ve happened without a dime of anti-Second Amendment Blood Money. Or as The Man With No Name once uttered, “A wink is as good as a nod to a blind man.”

Every Progressive is just a larval-stage despot, munching its way through laws, the truth, common sense and the Constitution. No wonder DDT scares ’em so much! 😆

Bloomberg should be spending his ‘social change’ money not on anti-gun ads but on studies to determine why the mentally disturbed and the evil in our society pursue paths leading to gun violence. And, why certain politicians pursue legal and sane gun owners with the same passion.

Your questions would not even register in his mind as they have zero to do with the results he seeks.

one of the big differences in my neck of the woods between the rights and control folks is that the rights folks actually contact reps, contribute to campaigns and vote…

Agree with TrooperJohnSmith that Bloomie’s money had no effect in New Jersey or Chicago.

But anything that separates Bloomberg from his money will probably end up good for the economy in the longer term, so spend away, Mikey!