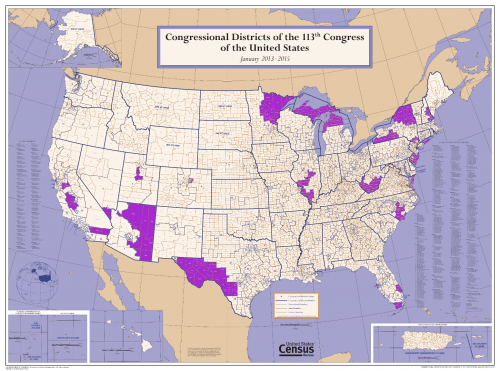 Analysis by Ballotpedia of the upcoming 2014 midterms reveals that many of the congressional races deemed “competitive” by the news media are incorrectly labeled, leading to increased campaign costs and misperception by the public.

In its coverage Ballotpedia highlights a different trend, the overlooked narrative of incumbency and gerrymandering.

According to Ballotpedia, in 2012 34% of congressional races were incorrectly labeled as competitive by the Cook Political Report. Of the 85 Cook classified as competitive, 30 races had a margin of victory of less than 5 percent in 2012; only three of the ten most expensive 2012 House races were decided by a margin of victory of 5 percent or less.

Ballotpedia has a name for those districts that are anything but competitive, but classified as so: “Moneymakers.” Ballotpedia:

An inflated sense of competitiveness is great for the news cycle. When pundits, political organizations, or analysts classify a district as competitive, other outlets add the classification to their own coverage of the race.

Unfortunately, this increased coverage leads to increased campaign spending, regardless of whether the race is actually competitive. That is exactly what happened in Maryland’s 6th district during the 2012 election season. Many pundits and political organizations such as the National Republican Congressional Committee,  the Democratic Congressional Committee and the Cook Political Report had classified the district as competitive throughout the election cycle. A total of $5.7 million was spent by the candidates in this district.

While the average cost of a general election for House congressional seat in 2012 was $2.1 million, an average “Moneymaker” election cost $3.495 million. Again, these are elections classified by others as “competitive” but according to Ballotpedia’s criteria, incorrectly so.

When the voting booth closes and the election results are tallied, we see the real trend that strengthens with every new election: incumbency is king and gerrymandering has left only a few handfuls of districts truly competitive.

Florida district 2 is not counted as among the “most competitive” next year, but it most certainly is. Rep Southerland (elected in 2010 after many years of a Dem in that seat) is now being challenged by a popular Floridian’s daughter (Democrat Bob Graham’s daughter Gwen, also a Dem). It will be close, and Southerland could well lose without much-needed support from conservatives.

There is some circular reasoning here as in a district isn’t competitive until it is. Consider Minnesota 8, which was a slam dunk for the Dems since the 1940s until the real stunner of election night 2010 when Jim Oberstar was beaten by Chip Cravaack. What happened? Not redistricting. It was a case of way too many terms for Oberstar, who had so lost touch with the district his finance reports showed exactly one reportable donation from inside the district. That, the Republican didn’t suck and in voting for Obamacare Oberstar had broken promises to some pro-life groups.

Mn 8 switched back to the Democrats in 2012 and I am not unduly hopeful it will switch again in the near future. Minnesota’s Iron Range is almost as reflexively Democrat as Minneapolis and there are Indian Reservations in the District as well that will turn out for Democrats. Elections on reservations are hard to monitor. FBI agents even fear to tread on some of them.

There will always be a few anomalous districts due to scandal, gaffes, etc. But overall the power of incumbency has been increased over the years. About the only factor working against an ever-stronger incumbency is the fact that state legislatures do change hands from time to time, so the gerrymandering may change in objective from one redistricting to the next.

“Wave” elections do not follow these patterns. Different national factors intrude upon what are normally localized contests.

The Democratic wave in 1974 was a reaction to Watergate. Republicans won in 1994 not because of the failure of HillaryCare or the new taxes, but because of the House Banking scandal which affected far more Democrats, including some senior members.

In 2006, Democrats rode the wave of a war-weary nation. In 2010, Republicans benefited from a backlash against bailouts and ObamaCare.

ObamaCare could well provide the basis for a wave next year. It is certain now that there will be MORE uninsured Americans on January 1st, not fewer, and the hits to employer plans haven’t really begun to register yet.

Small businesses are finding the rules which apply to closely-held corporations are different and unique. And almost impossible to follow without legal help.

Also, it is very easy to look back at past results and declare that districts which didn’t end in close votes were “uncompetitive,” but that is not always a reasonable conclusion.

A late gaffe, the influence of national or state races, or just a poorly run campaign by the loser can lead to a final count that belies the state of the race going into it.

Unfortunately, you can’t go to Vegas and place bets on yesterday’s games, or Ballotpedia would be rich.