Not new, but reflects the pathology behind the anti-Israel BDS movement. 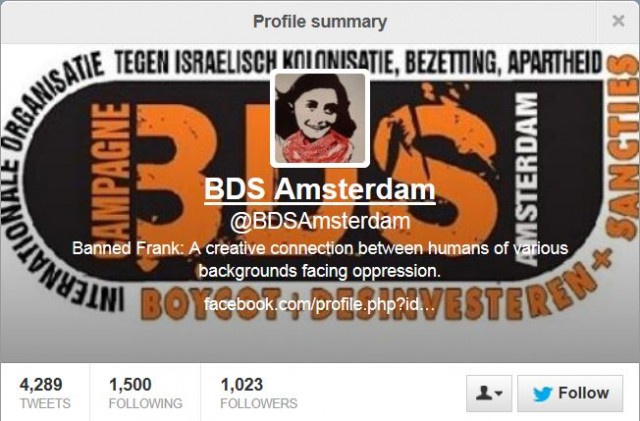 I guess nothing surprises me anymore about the anti-Israel Boycott Divest and Sanctions movement.

So I’ll just put this out there.

A Twitter account using the @BDSAmsterdam name uses Anne Frank for its Avatar, dressed in an Arab Keffiyeh and apparently has been doing so for quite some time.

The use of the Anne Frank in keffiyeh image is part of a deliberate strategy to usurp her story and image. It apparently was spread, at least in part, on the now defunct BDS Amsterdam Facebook page.

It’s something we see time and again in the BDS movement, trying to turn the failed attack by Arab armies to drive the Jews into the sea and decades of rejectionism and terrorism, long before Israeli reclaimed the West Bank from illegal Jordanian occupation, into a narrative of Israel being like the Nazis.

This is part of a greater movement to change history to aid in the war on Israel, including the usurpation of Christian history to claim that Jesus was “Palestinian,” and to use Christian imagery to exploit the conflict.

The image below is spreading via anti-Israel websites like Mondoweiss, but the question is, where there suicide bombers in biblical times necessitating a barrier for protection?

This is why you can’t view the academic boycott movement in the U.S. in isolation.  It is part of a worldwide movement that barely (and sometimes not at all) hides its desire to destroy Israel.

It is part of a pathological hatred that is spreading, and has rendered Jews in Europe past their expiration date,

OT.In my current Saveur Mag there is what is called’ Cornell Chicken’ . Credit is given to Prof Robert C. Baker. Are you familiar with either the chicken or Prof Baker?

Let me understand this. Aren’t they using a Jewish youngster as their hero in their boycott of Israel?

This is called “cultural expropriation”.

The imagery Anne Frank is supposed to conjure up is the gas chambers for the Israelis. Nothing surprising there. I make the point all the time when I call these BDS a-holes out.