BDS is the mother’s milk of spreading anti-Semitism, and ASA has become one of its teats. 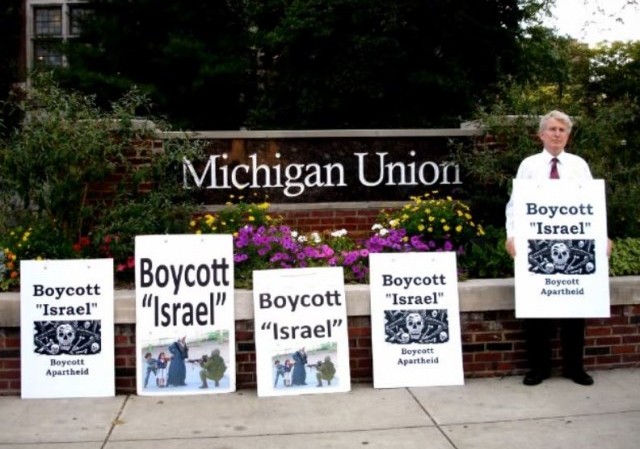 The American Studies Association seems to feel that it has a right to indirect state funding to support its academic boycott of Israel.

A NY State Assemblyman and Senator have announced that they will seek to introduce legislation to cut funding to state institutions which support, through dues, faculty sponsorship, and other means, anti-Israel academic boycott groups such as ASA.

ASA and a legal group dedicated to supporting anti-Israel boycott efforts (yes, there is such a group) are screaming that such legislation would be unconstitutional.

Via, NY Daily News, Anti-Israel group slams bill that would strip state aid from colleges tied to them:

A national academic group that has called for a boycott of Israel ripped into a proposed law Saturday that would strip state aid from colleges that maintain ties with the organization.

New York University Prof. Lisa Duggan, the president-elect of the American Studies Association, said by email that while her organization has not seen the bill’s language, “my guess is that they will get nowhere, and would fail in the courts in any event.”

Liz Jackson, an attorney for the group Palestine Solidarity Legal Support, who was consulted by the American Studies Association, questioned the constitutionality of the bill.

“This legislation would violate the First Amendment’s protections for freedom of speech, freedom of association and academic freedom,” she said. “And, of course, it reflects another round of baseless legal bullying to silence criticism of Israeli policy.”

Klein and Hikind blasted the boycott as “targeted discrimination against Israel that betrays the values of academic freedom that we hold dear” and something that could be in violation of the state Human Rights Law.

“Our state is under no obligation to support institutionalized discrimination — against Israel or anyone else,” Klein said.

I think the key to success of such legislation is how narrowly it is drawn.  I don’t see how state universities have an obligation to fund participation in ASA; penalizing universities whose faculty merely participate in ASA on their own dime, however, may be too far.

Expect universities to claim an infringement on academic freedom from such legislation.  Therein lies the irony, that the group which breached the academic freedom of everyone, and supports a worldwide cut-off of relations with Israeli academic institutions, may keep its university funding in the name of academic freedom.

ASA decided to make itself a weapon in the worldwide BDS war on Israel, a war which seeks Israel’s delegitimization and destruction.

BDS is the mother’s milk of anti-Semitism spreading throughout Europe and the world, and ASA has become one of its teats.

Regardless of how this plays out, ASA is no victim.

(Featured Image Source: YouTube video of BDS activist at U. Michigan, September 2012: “What do you do with a violent, racist apartheid state? You boycott it until it’s abolished.”)

“BDS is the mother’s milk of spreading anti-Semitism, and ASA has become one of its teats.”

Well, certainly a collection of boobs.

Can you comment on the significance of Rumsfeld v FAIR in drafting legislation which will pass constitutional muster?

Just what is “academic freedom”, anyway? Something special The Academy has that nobody else does? As I recall (doubtless imperfectly, as Mr Memory has been around a long time and is perhaps developing a few leaks), the concept of academic freedom as something special protecting The Academy suddenly appeared when school administrations began to think seriously about getting communists professors out of their schools. (Here in America it was never called “purging” due to bad connotations – in those days “purging” was what that jovial Georgian, Uncle Joe, did to “counterrevolutionaries”).

So, Rantbot, that would mean “academic freedom” has a very short history – starting with a birth of questionable intent?

So, Rantbot, that would mean “academic freedom” has a very short history.

The American Studies Association seems to feel that it has a right to indirect state funding to support its academic boycott of Israel.

And, of course, it doesn’t.

Thank you, Professor, for your efforts, and everyone else who is helping to clarify the antisemitism that is motivating this anti-Israel crap.

ROFLMAO at the idea of a bunch of leftist “academics” actually having to raise the money to fund their own activities.

ASA boycotts Israel, taxpayers boycott ASA. It has a pleasing symmetry to it.

And victims they should be. Victimize one of them today.

I want one of these morons to go to Saudi Arabia or pretty much any Islamic country and stay for a while. They will find out the true meaning of apartheid. There is no room for views contrary to Islam; just like these “academics” feel (they don’t think) that there is no room for academic freedom to entertain all views.They support intellectual apartheid; they are the ones, like the Muslims, who want a One-Thought world.