Why we need a Capitol City Project today

Why we need a Capitol City Project today

A sobering day for those of us observing the GOP’s messages in the wake of Virginia and New Jersey elections.

The Wall Street Journal‘s editorial page provides all you need to know about how the establishment is posturing Christie for President, writing that he’s 1) not a moderate, but a conservative (!!) and 2) wins Democrat votes, unlike Cuccinelli. They don’t pass up a chance to take a dig at the Tea Party along the way.

That’s why I launched the Capitol City Project this week; to shed light, without regard for party labels, on the connection between media, the political elites, lobbyists–and the staffers that run the show in our Capitol City DC.

The story of Chris Christie reveals exactly where our Republican Party insiders would like us to go. Observe those crowning him from the inside and you’ll see revealed a network that is more about power than principle. If the GOP can shed all its principles, just imagine how many Republicans we could get elected, they seem to say. It is a strategy concocted by those who seek to hold on to power, centralized in the Capitol City.

We at the Capitol City Project will be reporting on the entertaining, the sobering, the unbelievable, and the everyday stories that Americans need to hear.

You may be interested to learn that Chris Christie’s caricature is on the wall of The Palm restaurant in the Capitol City aka DC – -the same wall as McAuliffe and the Clintons. 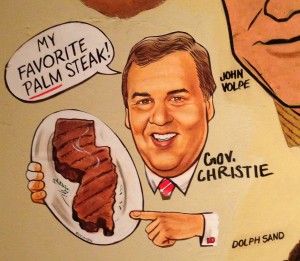 Cucinelli claimed to be a Conservative, yet he let beltway insiders run his campaign and keep other Conservatives away. If he had really wanted help, he could’ve called in Gov. Palin. That he didn’t call her spoke volumes to me. He called Chris Blowhard Christie who spat in his face. Nice.

I voted for McCain. I voted for Romney.
I will not vote for Christie. Period.

I have never a fan of all the departments or government agencies being in Washington DC. Too much concentrated power away from us. We should really split them up after we get rid of a lot of them.

I’ve long thought a better idea may be to force Congressmen to spend more time in their districts and Senators to stay in their states much of the time. Many of them have only a nominal presence back home after a year or two in office. It would be harder for the press, the consultants and the lobbyists to have undue influence if Congressman met in mass for only a couple of weeks a year and did all their other work by video conference. Try to imagine agribusiness lobbyists descending upon tiny Cherokee Oklahoma to meet with the current House Ag chair.

Someone needs to stick a pin in Christie and let all his hot air out! Right now he’s just blowing limited amounts out his big, fat rear.

If the GOP can shed all its principles, just imagine how many Republicans we could get elected, they seem to say.

A pure us vs them strategy where ideology plays no part.

Make sure when you’re investigating some of our “betters” you profile their “member of the media” spouses. My bet is that is why a good number of things don’t get reported–mutual backscratching by outlets that have the same “handicap”.

This is fantastic advice for the Project.

Even a basic listing of which elected officials’ spouses or significant others are a part of the DC media will provide a useful education to voters.

Christie voted for guns bans. As a Republican, he’s dead in the water.

Sorry, but I was scorched here at LI for saying how I wasn’t thrilled with Mittens. “Somehow”, I was told, “I had to get with the program”; I did but look what happened. It seems that the candidate who showed up for the first debate took the rest of the campaign off.
Let me say it up front–“NO to Krispy Kreme.”
I’ll vote but if he’s at the top if the ticket, I can assure you that it will not have a vote for that overweight RINO. Does that mean PIAPS will win? Maybe, but at least with her you don’t get the lecture about how she’s a conservative.

George Neumayr has an article at the American Spectator pointing out that Christie’s victory meant nothing for down-ticket Republican candidates in New Jersey. The legislature is still going to be heavily Democrat. Why would Christie have coattails nationwide if he can’t even pull anyone with him in his own state?

And the question is: Did he even try?

My guess is no. Christie is all about Christie.

For that matter, I don’t remember Romney doing all that much for the conservative cause and/or candidates. He was pretty silent leading up to his campaign. Obamacare? The 2010 elections? He gave some money, sure. But he required ABSOLUTE loyalty for that $ as well. I seem to remember a story surfacing about him requiring delegates to sign a document saying they would support him?

Christie is of the same mold IMO.

There is this: “Do unto others as you would have them do unto you.”

The GOP needs to learn that, study it, ruminate on it, internalize it, and make it their motto.

As a Conservative, I will treat the GOP RINO’s exactly as they have treated us. No support. If the RINO wins a primary, I will actively discourage others from voting for them.

Farewell, GOP. I didn’t leave you; you left me.

[…] shed light, without regard for party labels, on the connection between media, the political elites, lobbyists–and the staffers that run the show in our Capitol City […]