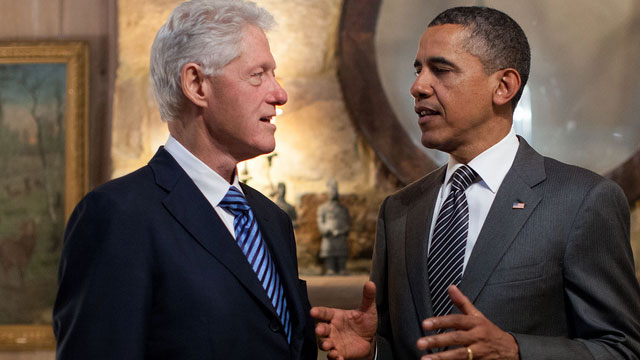 Bill Clinton deceived the American people in a flagrant manner when he said, shaking his finger:

Whatever narrow legal definition Clinton had used in his deposition in the Paula Jones lawsuit, virtually no one listening to what he said in that clip would think he was defining “sexual relations” in such an arcane manner.

When a president addresses the American public, his words are taken with their usual meaning. And the same goes for Obama’s oft-repeated pledge. It had an obvious meaning that completely resists any spin that operatives may try to put on it. “Everybody” knows what it meant, and everybody is correct.

But in the end Clinton got away with his deception. Not without angst, of course. But he remained president, and he’s now a somewhat-respected elder statesman of the Democratic Party, who just might end up making history by being the first First Man.

The difference between Clinton’s and Obama’s deception, however, is that Clinton deceived about something intensely private that really did not directly affect the American people very much, and the subject matter (being deceptive about sex) was one with which an awful lot of people could identify. Plus, he didn’t do it to pass a bill that would directly affect their lives in some very intrusive ways on some very personal matters.

Obama did just that. And now it’s the American people who might be paying for it: literally.

Excuse me, but we have a generation of young people who learned that oral sex is not sex. So a lot of young girls pleasured a lot of barely washed young boys with their mouths. Consequently, we have a lot of young girls today who have some interesting oral STD’s that they can’t get rid of because they listened to Clinton and believed him. Thanks to Clinton, we saw the devaluation of the POTUS in the eyes of many Americans. You may want to think of Clinton as some kind of elder statesman, but to many of us, he is a liar who abused a girl young enough to be his daughter. He made the office of the POTUS his personal bordello.

Obama’s lies will diminish us in tangible ways beyond their impact wrt our global standing on us. Clinton’s lies coarseness the nation morally, and our children are still paying the price for it.

Both Clinton and Obama are huge liars. In both cases, their lies will have a lasting and ongoing impact on the young, especially, and on the wider nation as a whole.

Both of them being such dishonest creatures probably explains why they seem to have such a strangely dysfunctional relationship.

Obama’s lies are a matter of life and death to hundreds of millions. Clinton’s lies were trivia, much like his entire presidency. It will make no difference to US history that Clinton was ever in the Oval Office. But Obama’s legacy, a ruinously overpriced and dysfunctional health care system controlled by a corrupt and incompetent federal bureaucracy, will certainly be remembered.

” … he didn’t do it to pass a bill that would directly affect their lives in some very intrusive ways on some very personal matters. …”

We cannot afford to allow our politicians to deliberately and willfully lie to us about legislation. That is unacceptable.

We should not have politicians who deliberately and willfully lie to us. Period. That is the ultimate form of contempt for American citizens.

vagaries of deception is perhaps a more descriptive title for these two.
clinton was a serial harasser and perhaps even a rapist.
and the media loved him.
seems whores like whores.

I remember that at some point during the 1992 election campaign a nonconservative newspaper published a piece enumerating eight or so demonstrable lies that Clinton had already told — statements that contradicted other statements he had made or indisputable facts he had to know. I remembered the story partly because I was surprised to see it in that particular newspaper.

And that was just before he was elected. Over the next eight years, people were calling Bill Clinton “an unusually good liar.” Christopher Hitchens wrote a book about him titled “Nobody Left to Lie To.” I also remember numerous scandals about which Clinton and his flacks would be naturally inclined to lie.

The “that woman … Ms. Lewinsky” lie is the one that most people remember, but it’s far from the only public lie he told.

Government Lies and Secrecy are Incompatible with Democracy.

The irony dripping from Collectivist apologists for ObamaDoggle saying, “It was democratically passed by majorities in both houses” is too much.

Totally agree. Clinton was set up and brought forth the worst of Republican behavior.

Obama, on the other hand, set us up and brings forth the worst of Democratic behavior.

At least Clinton knew how to govern. One wonders what Obama knows how to do besides create division while pretending to be a uniter and someone who actually cares about the people.

Implicit (if not explicit) in an extra-marital affair is lying about it. It’s a lesser-included offense.

I have maintained that Bill Clinton degraded the WH and America with it. I see no difference between either so-called ‘black’ presidents.

Exactly. There is no lesser impact or greater impact lie here. Clinton’s lies had socioeconomic impact. His lies about him having done welfare reform, peddled and sold by the LSM, encouraged the public to believe it could trust Democrats with the nation’s fiscal affairs. His constant lies about the budget surplus made it seem that Bush was a spendthrift who wasted the reserves. There were no reserves. That brought us to the other liar via the rejection of GOP fiscal management, never mind 7.5 years of economic growth, through Democrat manipulation of the markets at a sensitive point in the election cycle.

“Political language is designed to make lies sound truthful and murder respectable, and to give an appearance of solidity to pure wind” – George Orwell

Sounds like the mission statement of the Democratic Party.

Clinton wasn’t “lying about sex” in his sworn testimony. He was attempting to avoid a monetary judgment for his tortious conduct. It wasn’t as if he was keeping Hillary in the dark by that time, anyway.

The real difference between the lies of Nixon and Clinton and those of Obama are that the first two lied to cover their own butts to escape the consequences of their failings. It was wrong, but done for a narrow personal purpose.

Obama lied to sell America on a major socialist program. He and his aides deliberately calculated the lie as necessary to ram it through: without that repeated false assurance and others, the bill could not even have won the Democrats’ votes to pass it.

You really have to pay attention to what they say, not what you think they said.

Here’s another example: “The White House made no substantial changes to the talking points.” They didn’t… they told someone else what changes to make and THEY made the changes, not the White House.

I’m sure there are others, but those stuck with me.

How could I forget the most used one? “We’ve found no evidence…”.

That line has been used for Fast & Furious, Benghazi, IRS scandal, ACA… These guys are as bad at “finding evidence” as they are at creating web sites.