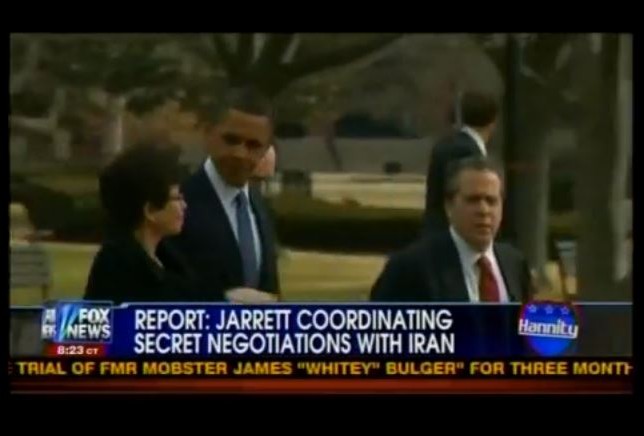 Almost exactly one year ago reports surfaced that Valerie Jarrett was engaged in “secret” negotiations with Iran as Obama’s personal emissary.

The reports originated with Iranian bloggers, and was reported also by The New York Times. The Obama administration categorically denied the reports.

Now Israeli television is reporting similar involvement, via the Times of Israel, ‘Geneva talks a facade, US-Iran worked secretly on deal for past year’:

The Geneva negotiations between the so-called P5+1 powers and Iran are a mere “facade,” because the terms of a deal on Iran’s nuclear program have been negotiated in talks between a top adviser to President Barack Obama and a leading Iranian nuclear official that have continued in secret for more than a year, Israeli television reported Sunday….

White House spokesman Bernadette Meehan was quoted by Haaretz as saying that the report was “absolutely, 100 percent false.”

The report, which relied on unnamed senior Israeli officials, said the US team to the secret talks was led by Obama adviser Valerie Jarrett. Her primary interlocutor, the report said, was the head of the Atomic Energy Organization of Iran, Ali Akbar Salehi. The talks have been taking place in various Gulf states.

In the course of the talks, the report said, the Americans offered the Iranians a series of “confidence-building measures,” which underlined American readiness to conclude a deal and undercut sanctions pressure.

It was the deal discussed in these secret talks, the report said, that the Americans then brought to Geneva earlier this month, where it was largely adopted by the P5+1 nations — the US, Britain, France, Russia, China, plus Germany.

It’s hard to know what’s true and not.  It does make sense that there have been secret backchannels established, because both Israel and France seemed surprised as John Kerry was ready to sign a weak agreement with Iran.  The Israelis in particularly were furious that they had been misled as to the terms until the last minute.

Whether Jarrett was involved, though, is another thing.

Because we all know now how reliable White House promises are….

Valerie Jarrett should be barred from any involvement with Iran whatsoever. And given no intelligence on it (although granted she has none).

Unfortunately, we both know that she has access to absolutely everything that Obama has.

With this administration anything is possible and no denial can be believed.

Ahh yes, Val remembering those fun days in Shiraz as a child.

She found a perfect thinking mate, with a no friend of Israel in the White House. Anyone that places their ‘trust’ with a Mullah’ocracy, has indeed been drinking one hell of a lot of, Shiraz.

What a freakin’ waste.

Val, ignore Israel’s righteous cause for a moment. Jus go undercover for a week in Iran to see how the women in Iran went from total western freedom to express themselves under the Shah to the cloistered covered up victims of oppression before you negotiate their chance for freedom from that oppression away. Stop the Iranian war on women!

I forget, please remind me.

When did PRESIDENT VALERIE JARRETT
steal an election?

If this is true–and I’d want to see some confirmation–in its own small way it’s one of the more appalling actions of the Obama administration, and “most appalling” is becoming a long list.

Leaving aside her adoration of Obama, for reasons that are not readily apparent, she is about the last person you’d want on a sensitive and important diplomatic mission. She doesn’t even claim to have any experience at all in foreign policy.

I guess it’s that feeling that if you went to really fancy colleges you are ipso facto smart enough to get around your ignorance and inexperience. This also may be true but I see no supporting evidence.

Jarret is an experienced courtier who flatters those in power to enhance her own situation. Think of her as a female Colin Powell with a lot less common sense about international affairs. As such, I’d take her adoration of Obama with a large grain of salt. She adored Harold Washington but after his death was the first of his circle to openly embrace new Mayor Richie Daley. When Obama came to national prominence Jarrett saw this as her ticket and new flattery was the way to ride it to the inner circle of the White House.

No, Jarrett brought him into Chicago’s inner circle.

Being an optimist, I have some hopes that the story of this regime will one day be fully illuminated.

On the other hand, there are a lot of totally un-scrupled people who have a lot they want hidden…probably forever.

Is a ghost president sort of like a ghost writer?

Not so much. Just follow this basic rule when it comes to the Left: always believe the worst. It will rarely fail you. And even when it does, not by much.

Jarrett is no mere sycophant. She’s the Obama’s “handler”. We don’t know who planted her, but somebody with gobs of money and some long-range plans is behind Obama’s rise. Otherwise it’s difficult to explain the career of such a lackluster pair of nobodys. Obama, a man of overweaning vanity and mediocre intelligence, is doubtless easily manipulated, and Mrs. O, an arrogant racist and dumb as a stump, the same. They don’t even evade Jarrett’s control while on vacations. If VJ was planted by the Persians – not my first guess, but as they’re almost certainly the most sophisticated operators in the Muslim world, it’s not all that far-fetched – then somebody’s plans are about to pay off.

I really hate to ask the question but given the actions of Obama, I observe that Obama’s use of drones raining death from the sky are principally aimed at Sunni extremists around the world and yet are no more dangerous than Iran’s Shiite Mullahs. Obama refused to help end the reign of terror by the Iranian Mullahs in 2009. With this fumble in Syria Obama has essentially legitimized Assad (Iranian ally) by making him a principal to the Chemical Warfare Agreement. Saudi Arabia and Israel are openly working together due to Obama’s failure to keep his word to both them. On whose advice did Obama make these decisions? Valerie Jarrett? On whose side is Obama, the Sunni or the Shiite? IS Valerie Jarrett a Shiite Muslim? There are simply too many consistent threads here to believe she is not and that her religious beliefs are guiding her advice.

I suggest you liberals pull your heads out of your utopian keysters and ask the question, is Valerie Jarrett pulling for just your agenda or someone else’s? IF the liberal agenda is for peace on earth (utopia) then how is that going to be accomplished by allowing the Shiites (an end times fringe lslamic death cult of the Madhi) to have operational control over atomic weapons which by their fringe religion is a necessary means to an end?

I suggest much of the fault for Obama not paying attention to the ObamaCare and foreign policy debacles is due to Valerie Jarrett doing ALL the thinking making Obama essentially a puppet. When you rely so heavily upon one person(s) to come to a conclusion, you aren’t making decisions, you are merely parroting them from your trainer. Remove Jarrett from the inner circle of decision making and you will see a markedly different outcome. From Valerie Jarrett’s POV, a failed Obama presidency in disarray works perfectly to Iran’s goals.

IS Valerie Jarrett a Shiite Muslim? We all know Obama isn’t taking any serious advice from his idiot, yes man VP.

I think that giving this administration credit for being slaves of idealism is a dangerous notion. They have repeatedly demonstrated a willingness to ride whatever horse might get them to their real goal the fastest, and that goal is power. There is no socialist utopian vision at the core of their values. Unfortunately, their is no real pragmatism at the core either.

IMO — This is all a just a way of blocking Israel and Bibi. The Saudis must be getting very upset at the O. Nothing to it but words. And lying words at that.