U.N. once again proves it is a very sick organization

U.N. once again proves it is a very sick organization 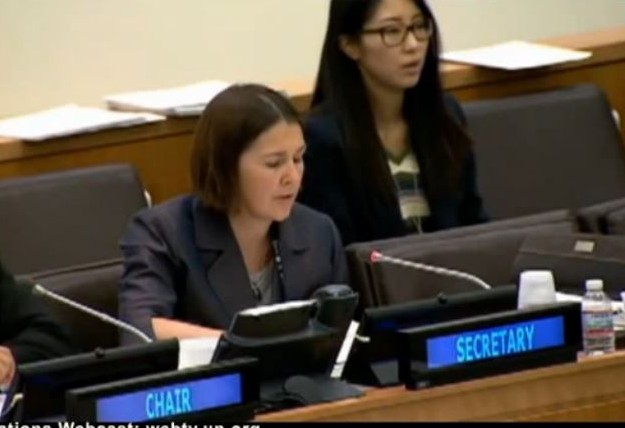 From Yair Rosenberg at The Tablet (via U.N. Watch) :

Yesterday was “bash Israel” day at the United Nations–which is to say, Thursday. The U.N. General Assembly, which last year passed 22 resolutions condemning Israel and only four against other individual countries, approved nine such resolutions lambasting the Jewish state. Naturally, it had nothing to say about violations in the rest of the world, though it did manage to lament the situation in Syria–that is, Israel’s occupation of the Golan Heights.

You don’t have to be a Zionist or a supporter of Israeli policy to recognize the profound injustice at work in the U.N.’s treatment of the Jewish state. In fact, as it turns out, even an official U.N. interpreter would be hard pressed not to notice it. Thus, during yesterday’s session, between the sixth and seventh resolution against Israel, the interpreter on the floor expressed her mystification with the body’s obsession with Israel at the expense of other global concerns, not realizing her microphone was still on:

I mean, I think when you have five statements, not five, like a total of ten resolutions on Israel and Palestine, there’s gotta be something, c’est un peu trop, non? [It’s a bit much, no?] I mean I know… There’s other really bad shit happening, but no one says anything, about the other stuff.

As you can see in the video below, the remark was greeted by laughter among the assembled delegates, after which the mortified interpreter apologized. The proceedings then continued, with Mauritania asking to retroactively add its voice to the sixth resolution condemning Israel’s human rights abuses. Mauritania, of course, boasts nearly a million people in chattel slavery. It is also the vice president of the U.N. Human Rights Council.

Watch the whole circus below (the hot mic moment occurs at 1:56):

There is no FLUCKING reason the U.S. should still host, finance, or even be more than a very nominal member of that nest of vipers.

They are a dirty joke, and affront to essentially everything American.

The UN should be evicted and the building converted to condos.

If it were converted to a bordello, it would be a step up in both ethics and utility.

I vote to make it a parking structure to help make up for more than half a century of unpaid parking tickets.

Let ’em move to Zimbabwe. They even have a black President, too!

As I recall, in the 80’s animated movie Heavy Metal, the UN building had been converted to public housing and was as decrepit as one might expect.

How do you fumigate a building that size? You’d have to do that before you could allow any other use.

Well when it comes to American interests, it can clearly be shown that putting the U.N. first brings about UNAmerican results.

Classic. The UN exists to bush Israel and waste US money.

I can’t name one Palestinian company that has produced anything for the human race. I think they are jealous of Israel. And, …

“”Why are the nations in an uproar and the peoples devising a vain thing?” (from Psalm 2)

Because they know that the Lord’s Anointed One rules “Upon Zion, My holy mountain.”

Their only industry is suicide bomb belts, and there just isn’t much repeat business.

Is there a country called “Palestine”? There isn’t. Never has been. Never will be …. unless the Israelis get really stupid.

Isn’t every day “bash Israel” day at the UN?

There was a time after WWII when the UN provided a useful forum for the superpowers and their allies (or captive nations in the case of the USSR) to talk and avert bloody conflict. After Nixon opened direct diplomacy, that need was no longer so pressing, and since the fall of the Soviet Empire, disappeared completely.

The UN now exists mainly for foreign potentates and despots and their cronies to party on the money of their impoverished peoples and cast votes on meaningless resolutions while stiffing NYC on parking fines.

The UN in a den of iniquity that US citizens should find insulted to be hosting. Most members are reprobates, thieves, criminals and corrupt dictators and should have been booted from the US and sent packing. A total drain on NYC and US taxpayers, it’s time to defund and disband it. The predecessor of the UN, The League of Nations was smartly dissolved but unfortunately something worse took it’s place and it’s time to it too.

Should have said it’s time to disolve it too.

You will never find a more wretched hive of scum and villainy.

“If the U.N. secretary building in New York lost 10 stories, it wouldn’t make a bit of difference.”
–ambassador John Bolton

Well, it would make *some* difference: Every floor removed would make it less bad.

American Jews who care about the welfare of Israel should ask their Congressman to withdraw U.S. funding from the UN. The New York City government could also withdraw the UN’s property tax exemption. These two economic moves would devastate their budget. If the UN moved out of NYC, that land could be developed into residential and commercial property resulting in enormous tax revenue for the city.