Typhoon Haiyan: How you can help

Typhoon Haiyan: How you can help 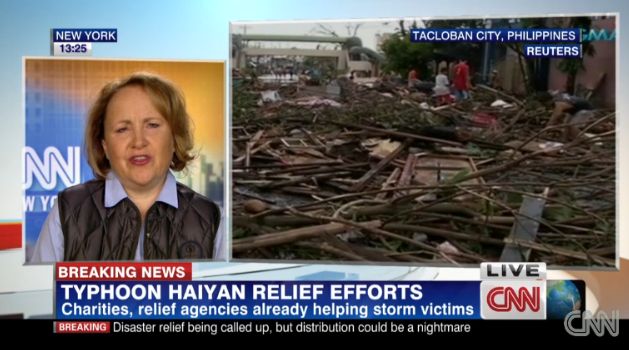 Typhoon Haiyan struck the central Philippines late last week, leaving behind immense destruction, many dead, and thousands displaced as they wait for help.

As food and water became scarce in areas hit by supertyphoon Haiyan, the Philippines government dramatically raised the death toll to 1,744, greatly exceeding earlier counts from one of the most powerful storms ever to strike the country.

Even that was seen as a low number, with the toll expected to rise significantly. Thousands remained missing and reports from stricken areas outline mass graves holding hundreds, with bodies also strewn in the streets.

In the city of Tacloban, four days after Haiyan devastated it, the road to the airport was jammed with people trying to get out. The road into town was also snarled with motorbikes and cars trying to fight their way in, even as humanitarian workers warned food and water was rapidly running out.

The scenes of devastation are unbelievable, and while relief is arriving in some areas, it’s complicated by choked roads and other logistical troubles.

As is often the case in the immediate aftermath of such disasters, reports of death tolls vary greatly, as many are still missing and workers are trying to retrieve bodies.  But officials fear that the death toll could rise significantly, while many outlets are reporting that more than 600,000 have been displaced.

From the Chicago Tribune:

As President Benigno Aquino deployed hundreds of soldiers in the coastal city of Tacloban to quell looting, the huge scale of death and destruction become clearer as reports emerged of thousands of people missing and images showed apocalyptic scenes in one town that has not been reached by rescue workers.

One of the most powerful storms ever recorded, typhoon Haiyan leveled Basey, a seaside town in Samar province about 6 miles across a bay from Tacloban in Leyte province, where at least 10,000 people were killed, according to officials.

About 2,000 people were missing in Basey alone, said the governor of Samar province.

The United Nations said officials in Tacloban, which bore the brunt of the storm on Friday, had reported one mass grave of 300-500 bodies. More than 600,000 people were displaced by the storm across the country and some have no access to food, water, or medicine, the U.N. says.

Individual accounts are every bit as devastating.  CNN reports that 30 members of one family are missing after the storm.

At the request of the Philippines government, the US has sent troops to assist in humanitarian efforts, according to FOX News.

How you can help

ABC News has already collected a number of links to relief organizations that are providing assistance, if you are interested in how you can help – those include Philippine Red Cross, UNICEF, Save the Children, CARE, World Food Programme, Oxfam America, Medecins Sans Frontieres/ Doctors Without Borders and International Medical Corps.  Samaritan’s Purse has also deployed a response team to assist in relief efforts.

Mashable has also compiled a list that includes Catholic Relief Services, Habitat for Humanity and the Salvation Army, among others.

I would put in a plug for AmeriCares. They work with established groups already on the ground to ensure that the aid goes directly where needed. They are very highly rated by several organizations (CharityNavigator, Forbes, etc.). Your money will not be wasted. No, I do not work for them.

http://ushare.redcross.org.ph
I am told this one works well and is specifically for philliphine red cross.

Of the organizations that have been mentioned, the most worthy is Medecin San Frontieres. This is doctors without borders, and they go wherever there is a need for a doctor. The money will help give medical assistance, and hopefully help pay for medical supplies as well.

Of the others, stay away from OXFAM, and I am not in the slightest bit keen on UNICEF these days. My concern about them is due to the fact that they push globull warming, and for other reasons about what happens to the donations.

Sans frontiers will be straight down to Mindanao with all your donated supplies . Or Syria .

Anywhere that is ‘rebel’.

This is the Philippines Catholic Relief Organization. I note that Wretchard has family and loved ones there. I am not sure if he knows if they survived.

Personally, I would avoid the Red Cross, because they like to siphon off a lot of Admin costs. Also anything to do with the UN or the United Way for the same reason.

I don’t know if they are involved with Philippine relief or not, but if the Salvation Army asks, they have an excellent reputation for putting donations for actual relief.

To direct your money to this relief effort, note that the Philippine name for the storm is Yolanda.