The New York Times, the nipple, and the Jewish star tattoo

The New York Times, the nipple, and the Jewish star tattoo

The New York Times chose the following photo to illustrate a front-page article about genetic screening in Israel for a breast cancer gene: 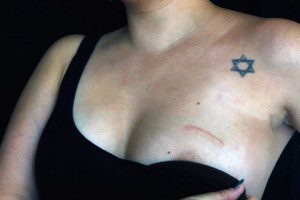 There’s been a lot of flak about the photo’s inclusion of the nipple—or to be more accurate, the half-aureole. But that’s hardly the only issue. Anyone who knows history knows that the tattoo is reminiscent of two things: the yellow Jewish stars the Jews were required to wear in many Nazi countries, and the more permanent marks—the tattoos—that inmates of many concentration camps were forced to endure.

That’s the limit of most of the buzz in the media about objections to the photo, which has been considerable: the sexual aspects and the Holocaust references.

But in addition to those two obvious controversies there’s a more subtle one. Because the image the woman is wearing is both a Jewish star and a tattoo, it would most likely be doubly offensive to strictly religious Jews who observe the Jewish laws about tattooing:

The source of this prohibition is Leviticus 19:28: “You shall not etch a tattoo on yourselves.” This prohibition applies to all tattoos besides those made for medical purposes, such as to guide a surgeon making an incision…

The human body is G‑d’s creation, and it is therefore unbefitting to mutilate G‑d’s handiwork…In ancient times, it was customary for idol-worshippers to tattoo themselves as a sign of commitment to their deity—much like an animal that is branded by its owner…The covenant of circumcision is unique in its being a sign in our bodies of our relationship with G‑d.

The NY Times is hardly known for its religiosity, but it certainly can’t plead ignorance of this Jewish teaching, because it published a lengthy article on this very subject in 2008, illustrated with another photo of a Jew with a tattoo designed to offend Jews of a more religious bent:

Well, we can now appreciate the Magen David in a new way…?

I sometimes wonder if I’ve turned into an old fogey.

Seeing a tattoo on a woman is an instant turn off to me, akin to bad breath.

As someone said, why would you want to permanently place on your body a piece of “art” that you would never hang on the wall at home?

On vacation this last summer, we were shocked when we attended a water park and, in our bathing suits, we felt like we were the only people there without tattoes. And when everyone has tattoes, nobody pays attention to them … so why bother and disfigure your body? I have to agree with religious Jews on this one.

When I was a child the only people who had tatoos were sailors and Death Camp Survivors.

I have always wondered if there was anything I would have tattooed on my body. I finally decided I would have a concentration camp number tattooed on my arm to serve witness. Since I am not Jewish – I thought maybe the number give to Dietrich Bonhoeffer (Lutheran Minister)would be appropriate but I have never been able to find it. Of course, I would not want to offend real death camp survivors in doing so.

“When I was a child the only people who had tatoos were sailors and Death Camp Survivors.”

As a boy growing up in the 60s and 70s, the only exemption for the feeling that having tattoos was “low class,” was for the veterans.

As for tattoos and death camp survivors, this man, a death camp survivor whose wife and only child died in the gas chambers, worked for my father and became a close personal and family friend. As I’ve said before, every gentile boy should be so lucky to have had such a friend … especially in this day and age of the young, university BDS crowd.

He “tattood” a lasting impression on me that can never be removed. My tribute to Herman Feder and my mother:

Jews are not alone in following Leviticus 19:28. Several Protestant denominations do also and even discourage pierced ears. While it is not a major “sin” it is highly discouraged and not to be exhibited while attending services or church associated activities. In many ways it is a cultural taboo also.

We had a very good bartender at my country club… he was heavily tattoed on his arms and legs; My buddy asked him why he had so many tattoos, and he replied: “They’re an investment” -I still don’t understand what he meant.

Curious who was responsible for the strange construction “G-d” in the quote from Leviticus. Was there a reason for that?

Many people don’t “name” the divinity as a form of respect (to put it simply). http://www.jewfaq.org/name.htm

The sacredness of the name, haShem.

I had thought that the context of the prohibition in Lev 9:28 had to do with a tattoo that identified oneself as part of a ANE religion — that it was proof of a cultic initiation. The point was that Israel was supposed to be faithful to G-d, and not participate in the other ANE religions of the Canaanites.

CHL: I concur it is an instant turn off, but for both males and females. Asking myself why I feel this way, I have only one answer: I feel the tattooed person has no respect for his/her self. This is not a rational, logical reason, but is the one answer that sticks with me. Yet I keep wondering why it is such a fad today. Are there really that many people out there with so little respect for themselves or is my feeling wrong? As a Navy corpsman in the 70’s who got tasked to remove tattoos, I have had a fascination with those who get them. My anecdotal observations as to why they get at tattoo boil down to two reasons: group identification (tribalism) and stupidity (usually involving alcohol). I am inclined to believe that today’s fad relates more to group identification, which tells me that the tattooed person is a follower who is dependent on group approval. Arm chair psychoanalysis, but my two cents…

As for religious disapproval, I learned something new. Thanks all.

Getting a tattoo used to be a sign that one was a rebel. Now, tattoos are so ubiquitous that they are the ultimate sign of conformity. In a few years, laser tattoo removal shops will be doing big business, as the rubes start to catch on to the fact that they have basically inscribed “I’m an idiot” on their bodies.

I suspect the combination of tribalism and alcohol has been responsible for a lot of tattoos over the decades. I believe that’s how my father acquired his during WWII. (It was of his unit emblem)

I suspect two more factors play into the recent fad. One is the embrace of transgressive behavior by a media culture and the other is the breakdown of many social ties, especially those of extended families. The young people I know with prominent tattoos seem to have particularly messy family situations.

I concur with your observations. I was also in the Navy in the 70s, and stayed through to the 90s. I got two tattoos during my early years for what seemed to be the only “reasons” for getting them at the time.

I got one on my upper arm, thankfully above the short sleeve shirt line. However, the other was for my tribalism. I was a Bos’n Mate and got some small crossed anchors on my right hand, between thumb and finger.

I have told numerous young people that if I could go back and undo any one thing, it would be to not get tattoos. When I extend my hand to shake, I will notice the other person glance down to see it. Few ask about it, but they give me a brief look as though they were meeting an ex-con just out of prison.

As to the religious aspect, I have since become a Christian. I believe that Jesus took my sins to the cross, and the tattoos were among that list. I don’t try to hide them, but I don’t show them off as if I was proud of them either.

Tattoos on veterans do not bother me. To me, that’s for whom tattoos are meant! Our warriors.

Otherwise, it’s a silly, aesthetically distasteful fad in my book.

Our family is not immune.

My niece, whom I love dearly, has had a couple of tattoos made on her calf.

She was bullied in school and never had close friends growing up. Now happily married with three children, the desire/need to be accepted, is a lasting psychological issue with her. The second tattoo she had on her birthday just a couple of years ago … and it caused my sister, who usually can handle all the crap life throws at her with good humor, to cry for two days, as she told me.

Tattoos are plain and simple ugly. They defile the temple. They trash the notion of the body as vessel for the Divine. Modern man is hugely anthropocentric and idolatrous. The tattoo pretty much says I AM IT.

I carry Leviticus 19:28 even further. We have an obligation to take care of our bodies beyond simply not defacing them. We must have a healthy weight, eat a healthy diet, and maintain a strong musculature. In my opinion, not having good health habits is a form of defacement.

Artistically though… I will inject my opinion 🙂

FWIW, the following NYT post includes a statement on the controversies from the 28 year old israeli woman in the photograph: The Woman in the Breast Cancer Photo Responds to Times Readers – NYTimes.com