Mideast Media Sampler 11/14/2013 — Any Agreement is Better than No Agreement? 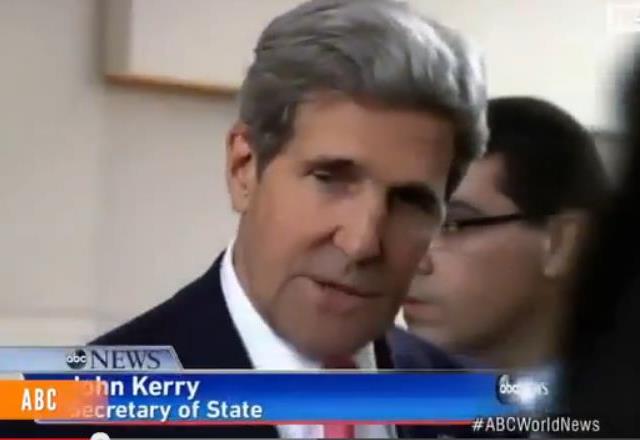 Let’s review some of the administration’s diplomatic activity over the past week.

Haaretz reports that the administration misled Israel regarding the terms of the proposed interim agreement with Iran over its nuclear weapons program. One senior Israeli official explained that on Wednesday Israel had seen an outline that the Israelis “didn’t love but could live with.” Thursday morning French and British officials, and not the White House, told the Israelis that the terms had changed and were much more favorable than what they’d been shown previously. “Suddenly it changed to something much worse that included a much more significant lifting of sanctions,” said the Israeli official. “The feeling was that the Americans are much more eager to reach an agreement than the Iranians.”

Natan B. Sachs lays out some of the particulars.

On substance, the Israelis, like the French, appear very concerned about the provisions of the interim deal that: (a) permitted Tehran to continue some uranium enrichment; (b) allowed Iran to continue building the heavy water reactor in Arak (with only an Iranian commitment not to activate it), which would preserve the Iranian short-cut to nuclear capabilities via a plutonium — rather than uranium — track; and, most notably, (c) provided Tehran with incentives that the Israelis see as the beginning of the dismantling of the sanctions regime. Israel’s concern is that the proposed sanctions relief will not, in practice, be reversible, while the Iranian commitments could be easily reversed (and in the case of Arak will not even be halted).

The French objections to the deal led the P5+1 countries to demand more of Iran, so the Iranian team left without a deal to return for consultations.

Now the New York Times is reporting Kerry and Biden Ask for Room to Reach a Nuclear Deal With Iran.

Mr. Kerry, briefing the Senate Banking, Housing and Urban Affairs Committee, made his case against the committee’s moving forward with a proposal for new sanctions even as Western diplomats were talking about easing existing sanctions in exchange for concessions on Iran’s nuclear program. …

The briefing was part of an all-out effort by the administration both to tamp down congressional saber rattling and to move diplomacy forward to reach the agreement that proved elusive over the weekend in Geneva. President Obama has made a flurry of calls to the leaders of Britain and France ahead of a resumption of nuclear negotiations in Geneva on Nov. 21 and 22. On Tuesday night, he called Senator Harry Reid of Nevada, the majority leader, to discuss Iran, among other issues.

Israeli Strategic Affairs Minister Yuval Steinitz said in Jerusalem on Wednesday that steps under consideration by the U.S. and international powers directly or indirectly would ease the punitive sanctions by about $40 billion a year, or around 40% of the overall annual impact. …

Ms. Psaki dismissed the Israeli estimate, and wouldn’t give a U.S. estimate for the impact of the sanctions relief being considered, but said it would be considerably less than the figure Mr. Steinitz cited. …

“Those who claim our proposal is not a fair deal and makes too many concessions should ask themselves why the Iranians turned it down,” a Treasury Department official said.

I find it interesting that a charge that Secretary Kerry misled Israel doesn’t get disputed, but the State Department goes after Minister Steinitz for his figures, without offering any of their own. Still the Treasury official’s question is an interesting one. Why did Iran turn down the deal?

Let’s go to Iran and Western Powers Clash Over Why Nuclear Talks Failed at the New York Times:

“It’s the United States which should get their partners on board, not Iran,” said Mohammad Ali Shabani, a political analyst with close ties to Mr. Zarif. “From the information that is available, what was on the table was an American proposal. It was France that ripped into it, not Iran.”

The official quoted by the Wall Street Journal meant to suggest that the sanctions relief was not so significant as to entice Iran to close a deal. But the Iranians tell a different story. The Iranians were bothered by the stricter conditions added by the French. They apparently were happy with the terms offered by Kerry before France got involved. So administration talk about the sanctions relief is misdirection. And if Iran was bothered by the restrictions imposed by France, the level of sanctions doesn’t necessarily matter. Further diplomacy, in this case would mean trying to water down the French demands.

In Opening the Door for a Bad Nuclear Deal with Iran, Maseh Zarif explained that there are three requirements for a nuclear weapon: fissile material, a nuclear trigger and a delivery system.

The enriched uranium and Arak reactor (a & b mentioned by Natan Sachs above) provide two paths to the fissile material. The asphalted area at Parchin appears to be covering up an area where nuclear triggers were tested. Iran has an extensive ballistic missile program. Ballistic missiles would be the “delivery systems” of nuclear devices. And this week, a general of the Iran Revolutionary Guard boasted that Iran’s ballistic missiles are even more accurate now.

Despite the claims of the Obama administration that we need not worry about Iranian nuclear weapons (because of the phantom fatwa), there’s a pretty strong circumstantial case that Iran is not pursuing a strictly peaceful nuclear program. Taken together with Iran’s involvement in the bloody Syrian civil war and its sponsorship of Hezbollah an international terrorist organization, Iran’s nuclear ambitions should be treated with the greatest suspicion. Yet the administration argues that it is those claiming that the Supreme Leader doesn’t really have new nuclear-free clothing who are the obstacles to peace!

If the argument was simply that the administration wanted to give Iran more time to come around to the P5+1’s way of thinking, it wouldn’t be so bad. But it’s clear that the administration is looking to weaken the West’s demands; not weaken Iran’s resolve. As with Syria, the President seems more interested in making an agreement that would mask his inaction than actually achieving his stated goal. (In this case preventing Iran from developing nuclear weapons; previously it was getting rid of Syria’s chemical weapons.)

I suspect the reason Iran won’t accept a deal is because they know Obama isn’t serious about trying to stop their nuclear ambitions. Sure, Obama may prefer Iran not get nukes, but he’s not going to stop them militarily nor support Israel’s doing so. Once Kerry pushed a deal that was so clearly at odds with the stated U.S. policy that Iran cannot be allowed to get nuclear weapons, Iran knew the U.S. wasn’t really committed to that policy in a serious way.

Kerry, BTW, is just about the last person who should be Secy of State. Although he was never very bright to begin with, now he comes across as a doddering old imbecile. There’s no way he can be trusted to pull off a high-stakes negotiation at this stage of his life. There’s only so much champagne and caviar one can ingest, only so many Georgetown cocktail parties one can lilt through before it starts to take a toll on one’s mental acuity.

So John Kerry couldn’t get his own countrymen, the French to go along?

The reason Iran won’t accept a “deal” from the U.S. and E.U. is a simple one: there’s nothing in it for them.

Put yourself in the curly-toed slippers of an Iranian ayatollah: if you sign the deal, you have to give up your nuclear weapons program and subject yourself to humiliating inspections by the IAEA. In return you get —

— what happens to you?

The West is not offering Iran anything to do the deal, and Champ can’t threaten the Iranians with any dire consequences. Sanctions? Iran has found ways around them and is finding more. Sure the sanctions hurt but clearly not enough to cause Iran to give up its nuclear program.

What other arrows does Champ have in his quiver? He’s not going to put the Iranians on double-secret probation is he?

This is all “speak loudly and carry a twig.”

The First Rule of Negotiating remains: “The loser of a negotiation is the party who cannot walk away.”

John Kerry would have made a more suitable diplomat for Europe in the early days of the last century. He wouldn’t have been effective, of course, but he might well have been shot, thereby increasing both the chances for a just peace and the average intelligence of humanity.

The U.S. under Obama’s leadership is not serious about Iran not developing nuclear weapons. I believe that they have resigned themselves to a nuclear Iran.

Even worse, they think that by pushing for peace between Israel and Palestinians, they will placate Iran and open the door to “normal” relations. The Obama Admin.’s view is both confusing and profoundly naive, but looking at the comments, actions, and indicators of Kerry and Obama, it’s hard to think they hold a different view.