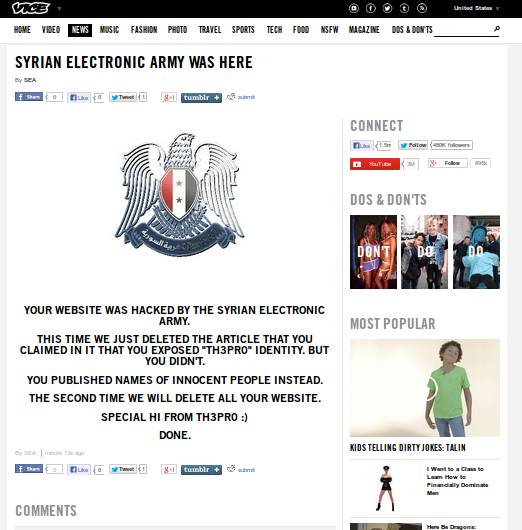 (Above image was the message earlier displayed by SEA)

The Syrian Electronic Army claims it hacked the website of Vice.com in retaliation for an article published in August, in which the identity of one of SEA’s leaders was alleged.

“Your website was hacked by the Syrian Electronic Army. This time we just deleted the article that you claimed in it that you exposed “Th3Pro” identity. But you didn’t. You published names of innocent people instead,” the hackers wrote in an article published on Vice.com.

The hackers threatened Vice in late August 2013. They claim to have gained access to Vice’s systems two days after the article about the identities of alleged members had been published. However, they say they’ve postponed the attack until now because at the time, Vice was aware of the fact that they might be targeted.

SEA, a group of hackers that supports Syria’s Bashar al-Assad, claims it gained access to the Vice website by breaching a number of email accounts, including that of one of the website developers, according to Softpedia as well as a series of tweets posted to the SEA Twitter account.

eHacking News reports that SEA “also claimed to have hacked into the mailchimp account and managed to send mail to 33,000 subscribers.”  Mailchimp is a service used to manage email marketing lists.

Following Vice’s publication of the August article on its Motherboard site, SEA denied its accuracy.

You can read more about the Syrian Electronic Army at Legal Insurrection here.

Seriously the internet was designed with a major crapload of holes.