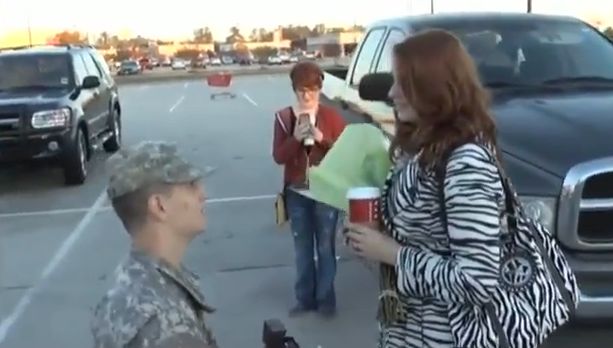 One dedicated soldier took an especially long trip this Thanksgiving, in a creative plan to return home to Conroe, Texas to propose to his girlfriend.

It was a surprise proposal captured on video. A soldier from Conroe spent nearly a full day in transit to pop the big question to his high school sweetheart.

Byron Van Biljon and Stormy Perry met while at Caney Creek High school. After high school, Byron joined the Army. He graduated boot camp and was sent to Camp Gordon near Augusta, Georgia, in August. The two hadn’t seen each other since. That is, until Friday.

With the help of Byron’s family and Stormy’s friend, Kayla, the soldier would set up the surprise proposal. He hopped on a bus Thanksgiving morning and rode 22 hours from Georgia back home to pop the question, and it all happened in the parking lot of a Best Buy in Conroe.

Stormy and Kayla, who were out shopping for Black Friday, were approached by a camera crew to do an interview about shopping that day. Little did Stormy know that Byron was not only back in town, but also right behind her with a dozen roses and a question.

It takes Stormy a little bit to figure out exactly what’s going on.  But she eventually catches on.  Apparently she’d been up since 3am doing some early shopping (see this alternate video).  She also got tricked into picking out her own roses.  Yes, little did she know.

Byron leaves on a bus again Saturday to take the long ride back to Georgia, reports ABC13.

Who needs Black Friday shopping fiasco stories when you can watch a soldier propose.

3am in a zebra camo outfit set for a full days’ shopping .

With imitative & cunning like that she should be the one in the army.

This happened just up the road from my place!

To all y’all (means more than 3) up in the northeast and on the left coast, this here is how we quaint, bitter, gun and Bible clingers out here in fly-over country act on occasion. I’ll ‘fess up; it made my old tired eyes water up.

That’s near my neck of the woods, too.

Congrats and good luck to them!

This is a familiar story: many junior enlisted get married early. I did. I got married after 8 months in the military, and my first child was born before my 20th birthday.
I regret having children so early, mostly because we were broke. See, lower ranks in the military make so little, most qualify for food stamps. If I had waited a few years until I had more money, things would have been easier.
I wish them good luck, they are going to need it.

@divemedic, marrying when you’re past 40 may not be good that either. You may end up picking a battered woman with lots of mileage compared to marrying early with high school sweetheart whom nobody else might have explored yet, except you. Plus, you can earn your degree while in the military service, too.

I know a few attractive credentialed military gals who Particularly hate the compulsory social occasions when they have to mingle with vapid stupid girlfriends . Wives are less of a problem because there are usually kids & most kids are fun.

The guys always say ‘ oh don’t talk to me because my girlfriend / wife gets jealous..

Of course the irony is that it is these military girls who are with the husbands day & night out there in jungles deserts & barracks & not them. They have very little idea what their men really are / do.

James – grow up . Real women join the military & take on the load . If they do marry a military man later they at least understand .

@bannedbytheGuardian, I dunno what are you trying to imply here. Grow up? Not quite. It doesn’t really matter if they’d marry early, you can be in the military or not, still you’ll attain your life’s ambition if you really pursue it. I have a buddy, he got married at barely 20 when he just entered college, his wife was almost 18. The girl’s dad thought it was a bad idea. Now what. The husband got his law degree to J.D. after 5 years before taking the bar exam. Marrying early not a bad idea after all.

Some nice viewer saw the story on the local news affiliate and bought the newly engaged soldier a plane ticket back to his base, thus sparing him the 22-hour return bus ride.