Sacramento Judge Rules that California’s Bullet Train is a Turkey

Sacramento Judge Rules that California’s Bullet Train is a Turkey 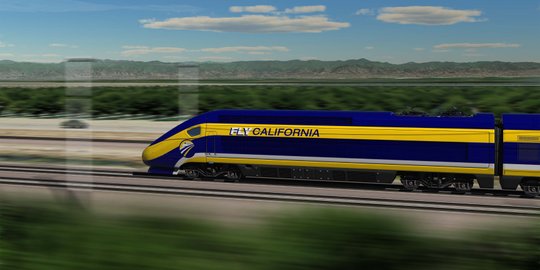 Progressives are being forced to eat a lot of crow this Thanksgiving.

At the national level, Obamacare is being plucked apart in the media.  In California, a touchstone of liberal green dreams and one of the state’s biggest turkeys is being thrown under the bus by a Sacramento judge.

In a major legal blow to the California bullet train, a Sacramento judge ruled that state officials cannot pursue their plan to tap billions of dollars in voter-approved bond funding for construction, a decision that could cause indefinite delays in the massive $68-billion project.

Superior Court Judge Michael Kenny, ruling Monday in two closely watched cases, found the state officials made key errors and failed to comply with legal requirements as they moved the project toward a long-awaited groundbreaking.

The decisions don’t immediately halt the project, but they have thrown its future into doubt and could sharply curtail the state’s ability to fund a complete high-speed rail system. State officials said they were assessing their options and exploring ways to keep the project moving ahead.

And while the Tea Party was not formed until 2009, many stalwarts of the current citizens movement fought against the High Speed Rail measure in 2008 (e.g., Howard Jarvis Taxpayer Association, California Taxpayer Protection Committee, and the Libertarian Party). The arguments against the measure included that it would have enormous cost overruns and damage the environment.  However, as conservative pundit Chris Reed notes in this video, the proposition was well crafted and had solid taxpayer protections that just saved Californians from their bond addiction.

The judge relied on two of those protections: The first 300 miles had to be fully funded without relying on federal dollars and that proper environmental reviews be completed. Since it has taken the state 5 years to do the environmental work for the first 28 miles of track, speedy progress on the remaining areas is not likely to occur.

San Diego blogger Dean Riehm has been following the high speed rail drama since the beginning.  He offers this assessment of the project’s likely future.

This may not be a death blow but these two rulings definitely put high-speed choos on the ropes. And there may not ever be a death blow, per se, rather death by a million cuts.

…Brown’s in-state allies and the statist acolytes both in California and across this country are playing a waiting game and hoping to establish just enough forward momentum and progress that the project becomes terminal and can no longer be walked away from regardless of the absolute financial black hole it becomes… and it will.

Short of a radical re-structuring of the current one-party rule that currently exists in California, count on Cali’s high-speed choo-choos to be far and away the most disastrous public works program this country has ever seen. In a sense, it already is.

We’ll add this to today’s list of things for which to be thankful. I hope it causes moonbeam some indigestion.

I’m holding out for the equivalent of binge-drinking heaves, plus a sizable encounter with the runs.

>>”At the national level, Obamacare is being plucked apart in the media.”

Actually I’ve noticed coverage turning decidedly more positive lately. The media seems to have satisfied its token, face-saving need for actual reporting and reverted to Pravda form. The “kinks” are finally being worked out, the worst is begind us, now get with the program. Remember, your White House access and Georgetown cocktail party invitations are at stake.

$68 billion? Given the price told to the taxpayers on some projects in SC and GA and their real costs, I would be surprised if it came in under $300 billion.

I lived my entire life in CA until two years ago. Trust me, believe me when I say this project will run $1T + when all is said and done.

Proof the left still lives in a world where it is always 1965 and the image of the Tokaido Shinkansen let viewers know Kelly Robinson and Alexander Scott were in Japan this week.

These trains worked in Japan and South Korea because they weren’t in competition with a modern highway system and they could be built in a cost effective manner on elevated and underground tracks. On grade level track as is being proposed in California these trains can only run at high speed in the most remote locations because of safety concerns. An accident at 200 mph turns every loose object on the train into a lethal projectile.

In 2013 America the unions, the environmental concerns and the NIMBY issues means the the proper tracks for high speed trains simply can’t be built on a cost effective basis.

In short, the best I can figure out, the courts are saying that the state government and its public and semi-private entities have to follow the same laws, regulations, and red tape that the Kulaks and serfs do before they can spend the money.

That cannot, and will not, be allowed to stand.

The solution will be the legislature and governor either specifically exempting them from those rules, or the creation of a probationary approval that allows functionally unlimited spending based on the full faith that a government entity will obey the law.

After all, “it’s for the children” [of the politicians and rent-seekers who will profit from this].

Although the bullet train was a pending disaster. Its death is a bit sad. LA to San Francisco would be a perfect setting for rapid rail service. I don’t know that you need a bullet train to accomplish the purpose, but a fast express running on a fairly high frequency would certainly be beneficial.

My whole family on my mother’s side were railroad engineers in the glory days of affordable train travel. I remember, as a boy, listening to them tell stories of running 100 to 110 miles per hour routinely–before the rail beds were allowed to deteriorate and the rolling stock became decrepit. You can cover a lot of ground at those speeds and move a lot of people at low environmental and fuel costs. Speeds of 150 mph, or greater, would not be a great technical challenge.

I am a retired airline pilot; but, I have always felt that we are using airplanes inefficiently for short and medium length travel that would have been better served by a good rail system. In the time it takes to process through an airport, and for an airplane to make its way to the runway, a fast train could be well down the track. On the other end, add on the approach and arrival processing, as well as the remote location of most jet capable airports, and trains make even more sense; and that is before you even consider weather disruptions.

Unfortunately, we let the infrastructure go; and you cannot recover it in today’s bureaucratic environment. The environmental restrictions, the cost of land, the massive cost union labor, and a myriad of other issues stymie almost all large projects. Jerry Brown should know that better than most.

What this was about was state pols getting to their cocktail parties and back-room meetings more quickly, more enjoyably and saving them the need for two residences and/or hotel room bills. A ride on the thing would be too expensive for a middle-class person just wanting to go on an excursion. It wasn’t intended for use by the people who will be paying for it – not by a long shot.

Decent rail service between LA and SF is not an inherently bad idea, but the “bullet train” scheme was a Democrat slush-fund doondoggle from day one. Richard Blum is probably spitting mad.

The proposition passed by the voters required the state to have funding for the complete project lined up before starting construction. The progressive fascists were pretending that they met these requirements so they can waste billions of dollars pandering to their union supporters and building this worthless boondoggle.

The Judge is now requiring them to deal with the reality that they have to meet the requirements of the proposition in order to spend the billions it authorized.