Remember, “Death to America” is Persian for “I’d really like to visit Disneyland”

Remember, “Death to America” is Persian for “I’d really like to visit Disneyland” 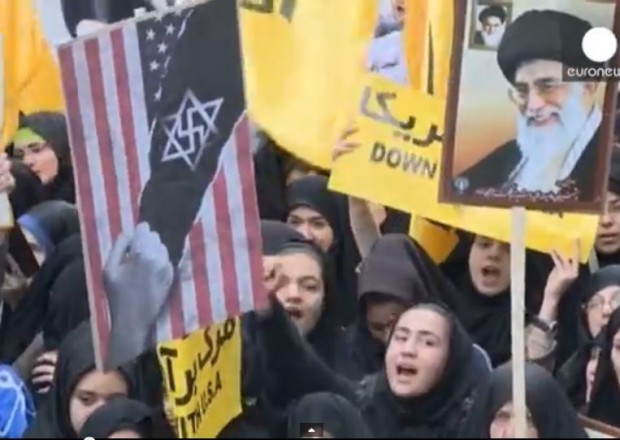 I had to laugh listening to the audio of the NY Times Tehran Bureau Chief explaining away the intensified and widespread chants of Death to America on the streets of Tehran as not really meaning “Death to America” (h/t Althouse):

On this 34th anniversary of the takeover of the U.S. Embassy in Tehran, thousands of Iranians gathered outside that building to once again chant “Death to America.”

But New York Times Bureau Chief Thomas Erdbrink told NPR’s Steve Inskeep on Monday that though the shouts were the same as they’ve been since 1979 and the demonstration was larger than in recent years, the people he interviewed there were not virulently anti-American.

“All the people I spoke with,” Erbrink said, “didn’t really mind Iran talking to the United States … [and they] admitted they want to see some sort of solution” to three-plus decades of fractured relations.

I laughed not because the subject is funny, but because it reminded me of left-wing guru Professor Juan Cole from March 2009, insisting that when they chant Death to American in Iran, they really mean “could you get me a visa, I’d really like to visit Disneyland” (video below, at 3:08):

Incongruent as it may seem, “Death to America!” may, indeed, not mean that. I believe I’m getting the attribution correct when I say that travel expert Rick Steeves once said on his radio show that the sentence in question did not really mean the speaker/shouter wanted death to come to America. I confess that I do not remember exactly what less severe thought was attached to the sentence so I’m not gonna make up some stuff here at this time.

For what it’s worth…

‘k’ I found it. Rick Steeves wondered aloud, in his online journal:

“…Do the Iranians literally wish “death” to the US and Israel? Or is it a mix of international road rage, fear, frustration—and the seductive clarity of a catchy slogan?…”

Good point and an important one to keep in mind.

Link: http://www.ricksteves.com/iran/iran_journal.htm under the sub-heading “Death To Whatever!”

It’s kind of like the Soviet Union used to be — record crowds always turned up for various state-sponsored events. And people loved it, too, only they were having their own holiday — drinking, having fun and what not. And drinking was more or less necessary on October Revolution day because it was so freaking cold. (See here:http://www.academia.edu/393156/_The_Cynical_Reason_of_Late_Socialism_Power_Pretense_and_the_Anekdot_)
I have to say, though, that Iranian demonstration looks a bit more intense than anything I witnessed as a child. I don’t recall anyone chanting “death” to anything, men and women mingled freely and there was a lot of balloons. Lots and lots of balloons. At least that’s what I remember.

As much as it seems ironic, Americans haven’t really seen themselves as distinct from their government on an international scale. (Though that is changing dramatically over the past 10 years or so.)

Overseas, the protests against the American government doesn’t usually translate to protests against the American people (Jihadists are the exception to this rule). I am astonished when I see the reaction from Europeans when I explain that Americans see themselves (or used to see themselves) as being represented by the policy positions of the government. They think it quaint that Americans believe that their government ought to work for them, rather than for “The bigger picture”.

As for Iranians, we have shafted them on so many occasions now, for not standing with them when they openly dissent, that I can imagine the chant means exactly what it seems now.

Those words surely qualify as a hate crime.

Okay. So if there are 28 million Saudis in Saudi Arabia, and 82% of them “like” America, and only 18% of them really want “death to America”, then that means that there are only 5 million or so radical Islamists in that country who want us dead and maybe only a quarter of those (mosty teenage and adult men) who might actually take up arms against us if given the chance.

Got it. A mere 1.2 million or so potential terrorists and Islamists. Nothing to be concerned about. Piffle.

Oh, I am very clear on the fact that many Revolutionary Guards would happily MELT Disneyland as an affront to Allah.

Yeah, y’see, when a nation says with 100% consistency over more than three decades that they want you dead, sure, they may not mean it, but I’m thinking prudence dictates we take it seriously.

About a year ago, one of the big names in the black community was warning that whenever a black calls a white “prejudiced” or “bigot”, the white took it personally, and that blacks should be prepared for that reaction. Because, of course, the black meant that the white was the beneficiary of racism, etc, not that the person was whichever.