Oprah: Living In Another Era

Oprah: Living In Another Era 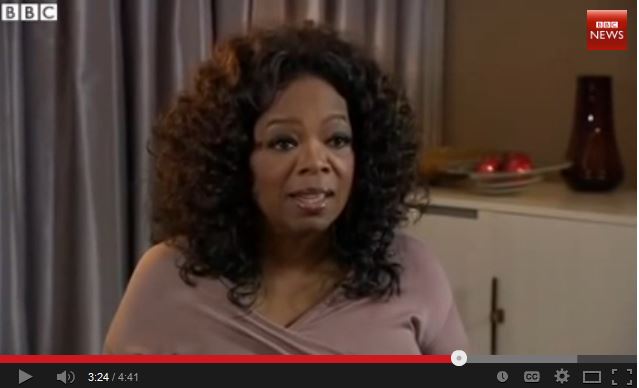 Many of you may recall Oprah’s recent comments regarding her sense that Americans disrespect Obama because he is black.  In response, Mark Joseph, writing in his USA Today column, “No, Oprah, America isn’t racist,” argues that she’s “living in another era” and illustrates his point with a rather compelling argument:

Because it is more often than not Tea Party types who are accused of racial hostility toward Obama, I have a parlor game I play with my white conservative friends that tells me everything I need to know about the state of race relations in America.

“If your daughter were thinking of marrying a man like Clarence Thomas or one like Chris Matthews, which would you choose?” I ask.

The answer is quick and unanimous: They’d choose to spend their holidays with a son-in-law who looks nothing like them but shares their values rather than one who merely shares their skin color.

My response is equally quick because there is absolutely no contest here.  As a white TEA Party “type,” I’d far rather my daughter (if I had one) marry someone like Clarence Thomas than someone like Chris Matthews.  Of course Chris Matthews is a particularly awful example, but even without the Obama-inspired tingles up his leg, he’d be far less welcome at my family gatherings than Justice Thomas.  Values, the content of one’s character, mean a great deal more to me and mine than skin color.  I’d venture to say this is true of the majority of TEA Party members and other conservatives.

Not that we’d ever convince the left of this fact.  But we really don’t need to, especially if more people like Joseph write such columns in “mainstream” outlets like USA Today.

Of course, racism is Oprah’s “go to” explanation for any and all perceived slights, so whether she is living in another era or is simply in denial about the millions of white Americans who made her the multi-billionaire she is today, we can expect more of this from her in future.

You can play this game with your liberal friends too, no ?

Ummm, no. The rules are different.

No one I know seems to know!

I think a painting style might work best, or maybe a Branco cartoon…..

Make it and watch the Leftists explode!Snark Snark

If it weren’t for pervasive inherent American racism, Oprah would be a trillionaire instead of a mere billionaire.

True dat. How many black trillionaires have you read about. (of course there are no white trillionaires–semantics)

Actually, racism is alive and well. Add in the panoply of other PCisms. For decades we haven’t been so self-consciously groupist as we are now.

If Obama had been white, he would would have been elected, let alone re-elected, and the major media wouldn’t have been exalting, protecting, and pussyfooting around his multifarious scandals and failures.

An alternative explanation is that Oprah is merely the latest example of an old phenomenon. Like the British industrialists of the 19th century who once their fortunes were secure taught their children to ape the manners and attitudes of the titled gentry, Oprah may be seeking to affiliate with a new social class. She made her fortune catering to strictly middlebrow tastes. Now perhaps she has decided she wants the respect of those who hold themselves out to have highbrow status- they very type who sneered when their works were included in her book club. In 2013 America that is measured by one’s adherence to the political code of the media/academic intelligentsia.

I’m a little more cynical. This is pure marketing.

Or maybe the racism Oprah senses is found within that media/academic intelligentsia she wants to break into, and it stings. I saw it, too, although I thought of it as provincialism. Michelle Obama saw it, and wrote about it in her thesis. One of the very interesting part in Michelle’s thesis was the remark to the effect that, the more Liberal a person was, the more racist. What she was in no position to know is that the quiet, smug, superior separatism she observed is directed in a lot of other directions besides skin color.

The East Coast is full of very polite bigotry among the people who think they are entitled to run the country.

You have nailed a phenomenon that has hit many in Hollywood. Once they attain celebrity status they show their true beliefs. Just look at the Blacks who have turned on America after they have become wealthy. Harry Belafonte, Samuel Jackson, Morgan Freeman, Danny Glover Oprah and many of the rap crap genre. They don’t seem to understand that in any other country they would have never made it like here. But once they get rich they feel secure in denouncing the country that gave them the opportunity to succeed. I say GTFO!

We have Clarence Thomas, Allen West and Thomas Sowell.
They have Oprah, Al Sharpton and Jesse Jackson (Sr and Jr).

Your comparison is unfair. You are comparing apples to bananas!

To make it fair, you need to pick liberal figures with at least some recognized prestige and integrity like…
Oh, wait…Darn!

I’ve said variations of this same thing to liberal friends who hint at the race card. I’d be extremely happy to have a son-in-law like Allen West or Larry Elder, but I’d be miserable having a white, lefty son-in-law.

I have a white lefty son-in-law, and it is miserable.

Oprah’s just mad at y’all cuz y’all tuned her out after she went political. She lost a lot of money and her new network is a bomb. She was counting on y’all to make her more money. So, of course she’s gonna see racism everywhere. I mean, she lost money here now!

Seriously though, there are blacks who didn’t like oprah cuz they thought she was acting to whites. Now she’s letting her roots show so she can be part of the team.

Sigh! Damn ios7! Not acting to whites but playing up to whites.

Oprah is voicing the certain and sure demagoguery of the American liberal utopian view. She hates everything about America EXCEPT the money and the comfort that the money can bring. If money could give her a white skin, blonde hair, blue eyes and a narrow nose she would be first in line to get them – but she’s stuck in the skin she was born in and unhappy about it. Therefore, America is a bad place filled with people who don’t like blacks. She’ll just have to settle for the money and hope she’s not reincarnated as a jackass…again.

Nail on the head, baby! That’s also Obama’s problem. Here he was, a biracial kid being raised by his white grandparents but having darker skin.

It is spelled o-p-e-r-a, opera. It is a story told with dramatic effect.

That said, Oprah should be careful to not become what she fears most: racist. It is the rare occasion when casting general aspersions will not reveal your prejudice.

Sweetie, Oprah is already racist. She doesn’t have to become. She is.

I’m so done with all this race card playing garbage. I have too much on my plate to bother wasting any of my energy by trying to suppress minorities. I’m sick of listening to their silly narrative about intrenched racism. Those who keep playing the race care are the ones with the intrenched racism. Oprah should repeat her comments to her mostly white audience and see how that affects her ratings.

The Black-American here, in the U.S., that continue to live in the past should move to their heritage homeland, it is still hip to be..umm, well, not racist as much as it is ethnic or tribal annihilation.

They will love it AND they can show their new friends, how to play the “knockout” game. To bad Africans have played that game for a long time. Only they use machetes.

Oprah is suffering from an excess of Black privilege supplemented by a couple of billion dollars but she still has a share croppers mind.

I wonder if Oprah’s psychoanalyst has ever been able to channel Oprah’s aggression to a better place or whether the therapist just agrees with Oprah’s every thought out of fear of being called “racist”? A lot of money can buy a lot of hokum.

It’s important to get this point right: racism is Oprah’s “go to” explanation when Obama is losing the argument.

This has nothing to do with slights and everything to do with shielding Obama from responsibility for Obama’s actions and his choices and the fight to take stuff away from white people and give it to black people.

Gee, Oprah, isn’t funny how all those white people who made you a freakin’ BILLIONAIRE and elected Obama TWICE have suddenly become “racist” now? Coincidentally, just at the same time Obama’s utter incompetence is becoming undeniable even to congressional Democrats?

Of course, this is a woman who finds it “racist” if a shop won’t open up AFTER CLOSING to allow her to browse privately.

She’s full of it. Dr. Ben Carson, Herman Cain, Thomas Sowell, and others, are widely admired by conservatives for their political views.

People who claim the only possible reason for opposing Obama is his skin color must think he is doing a perfect job as president. So the problems with healthcare.gov, and the NSA spying, Benghazi and Fast and Furious (etc) must not have actually happened, huh?

What a relief! Here I thought he was just the most incompetent, corrupt, lying idiot EVER to hold the office.

Part of what drives Oprah’s ridiculous comments is her desperate need to explain the failures of Obama’s presidency.

Leftists can’t admit that their theory is wrong so generally they turn on the failed Leftist politician and claim he’s an incompetent, sellout, etc. In Oprah’s case, she explains the political failure on the old standby of racism. All of Obama’s Lefty policies would’ve worked if it wasn’t for racism.

No need to explain how racism caused ObamaCare’s dsaster, failed stimulus, record unemployment, etc. Nor is there a need to explain how a racist nation elected a Black(ish) man for president– a political unknown who never would’ve come close to a nomination if it wasn’t for his race.

Much easier to just yell racism and then sit back and bask in unearned moral smugness.

She is one spoiled, self-centered diva.

Who cares? For all of her talent and wealth, Oprah has done nothing to make America a better place, nor has she invested in making the lives of black Americans better.

Agreed, but what exactly is Oprah Winfrey’s talent?

Sometimes giving a piffling of Free Stuff, that she got FREE from others!

Nobody can accuse Oprah of being stupid since she is immensely wealthy and successful. However, having said that, it was she who endorsed a man for the presidency knowing full well he had no experience and no background qualifying him to lead the country. Why? Because Obama is a black man. And if that isn’t racism I don’t know what is.