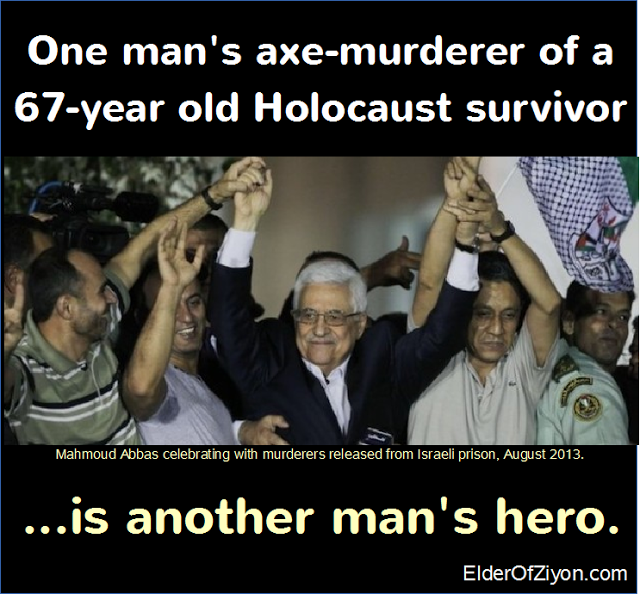 As we’ve noted earlier, much of the media is obsessed with settlements, intent on portraying them as the main obstacle to peace. There’s a tendency on the other side to take one of the most outrageous examples of Palestinian behavior and dismiss it.

As Professor Jacobson noted last week, Israel, in order to entice the Palestinians to negotiate for a state of their own offered to release 104 prisoners from jail. These aren’t just prisoners. Most, if not all, are remorseless murderers who are treated as heroes by all segments of Palestinian society, including their leaders.

Jonathan Tobin made an apt observation about this phenomenon:

One group of people was happy as murderers went free while others wept. But the gulf here is more than emotional or merely, as the Times seemed to describe it, a difficult process that is part of the price Israel must pay for the chance of peace. In fact, the “emotional gulf” is indicative of a vast cultural divide between these two peoples that explains more about the absence of peace than any lecture about history, borders, or refugees. Simply put, so long as the Palestinians honor murderers, there is no reason to believe they are willing to end the conflict.

Consider the way the New York Times in the article cited by Tobin portrayed the Israeli reaction to the prisoner release:

In Israel, where the returnees are widely viewed as terrorists, the release on Tuesday, like the one in August, has stirred protests and anguish. Many said it was too heavy a price to pay for entering negotiations with no guarantee of a peace accord.

“[W]idely viewed?!?!” This statement is incredible. It’s not only in Israel that they are “viewed as terrorists,” but by definition. Only in the crazy New York Times worldview is the definition of terrorists subjective.

But when dealing with settlements in a subsequent report, the same reporter wrote:

But with each prisoner release — there have been two so far — the Israeli government has tried to appease right-wing members of the coalition by advancing settlement construction plans in East Jerusalem and the West Bank, moves that have deeply embarrassed the Palestinians.

In this case “deeply embarrassed” is not qualified in any way, but presented as fact.

An article in the Washington Post displayed similar moral gymnastics:

The first 52 of 104 prisoners have been released on schedule. Freeing prisoners is an unpopular gesture in Israel — all of them were convicted of murdering Israelis — no matter that the inmates have served long terms. …

On Wednesday, Hanan Ashrawi, a member of the Palestine Liberation Organization’s executive committee, charged that Israel’s announcement that it would add new housing units to Jewish settlements around Jerusalem and in the West Bank “has proven once again that it is not a partner for peace.”

The housing announcement was widely seen as a political counterweight to the prisoner release.

Note the qualification about “long terms” as if somehow the fact that they had served long sentences absolves them of guilt (in some countries they’d never have been released), but Ashrawi’s quote is provided with no qualification at all.

Missing from any of this reporting is not just the context that Jonathan Tobin described, but a very disturbing declaration by Palestinian President Mahmoud Abbas.

Not only has Abbas been celebrating the return of the prisoners as heroes, but he has taken responsibility for sending them.

Palestinian Media Watch recalls that in 2005, Abbas said, “I demand [release of] prisoners because they are human beings, who did what we, we, ordered them to do. We – the [Palestinian] Authority.”

The basic requirements for there to be peace between Israel and the Palestinians was that the Palestinian give up terror and accepts Israel’s right to exist. That has never happened. Instead we see a world that consistently relaxes the standards for the Palestinians and tightens them for Israel. Thus we live in an inverted moral universe where building homes is a bigger obstacle to peace than killing people. And people wonder why the conflict is intractable.

[Image: Courtesy of Elder of Ziyon]

It happens to most journalists at one time or another.

And let’s not forget about Samir Kuntar who was released in 2008.

… In 2008, Al Jazeera threw an on-air party for Samir Kuntar when he was released from an Israeli prison. Kuntar led a Palestine Liberation Front terrorist team that kidnapped an Israeli family in 1979. He shot the father and killed the 4-year-old daughter by smashing her head against rocks along the beach. Al Jazeera’s Beirut bureau chief hands Kuntar a scimitar to cut the celebratory cake and says: “This is the sword of the Arabs, Samir.”

… In 2009, Yusuf al-Qaradawi, host of the network’s most popular Arabic-language show, “Shariah and Life,” said on air: “Oh, Allah, take this oppressive Jewish, Zionist band of people. Oh Allah, do not spare a single one of them. Oh Allah, count their numbers and kill them, down to the very last one.”

I think the lot of them should be “widely viewed”, and that that wide viewing should be facilitated by drawing and quartering. If the Palistinians ever do get their own state, they’ll learn that the price of statehood is being held accountable for the actions of one’s citizens. How long before Gaza is transformed into a series of semi-circular bays on the Mediterranean?